Dear @POTUS, @FLOTUS and @KensingtonRoyal – did someone say “bring it?” Canada’s ready for @InvictusOrlando.https://t.co/TxBAMPvTYs

As it turns out, being called “foxy,” “non-controversially f—able,” and the “J.F.K. Jr. of Canada” for months on end can give a guy a big head. That is the only explanation for the most awkward 23 seconds ever, i.e. Prime Minister Justin Trudeau’s latest viral video. Wading into some charming pre–Invictus Games smack talk between Queen Elizabeth and the Obamas, the prime minister flaunted the results of all his boxing and yoga sessions, greeting viewers with a faux-surprised “Oh, hey,” then dropping and giving the Internet one alongside two scarily ripped Invictus athletes. And it was not fun for anyone to watch. 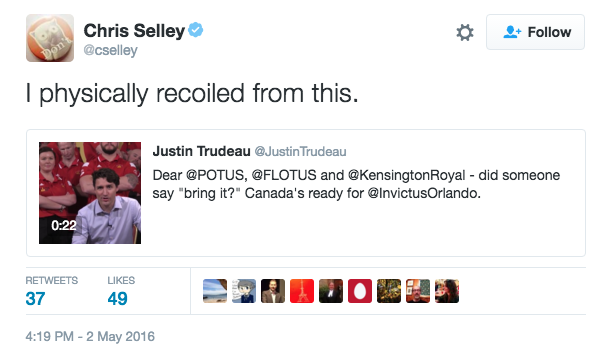 To be fair, I also don’t want the world to think a horribly unsynchronized mic drop is “how Canada brings it.” (Seriously, would a 30-second re-take have killed anyone?) Still, it’s funny how online commenters react so viscerally when the inherent cheesiness of politics — the photo ops and the baby-balancing that, for the record, they’ve been lapping up from Trudeau for a while now — is laid so painfully bare. Or that they’re at all shocked that a guy they once christened “a smoking-hot syrupy fox” thought it appropriate to show off his one-handed planking skills. Are critics of the video really surprised that a head of state was caught in a choreographed moment? Doubtful. More likely, it doesn’t sit well with them that the man whose panda cuddling and poetry skills once drew their unchecked fawning caught wind of the swoonfest and got a little too confident in his public-wooing skills. (Now drop the mic.)

More:
Mothers and daughters on pride, regret and the things they’ve never said
I tried to warn women about Jian Ghomeshi — and it nearly destroyed my life
Memoir: The baby girl I almost had