Jian Ghomeshi’s apology was no apology at all

His statement only underlined the larger questions that loomed over his charges. 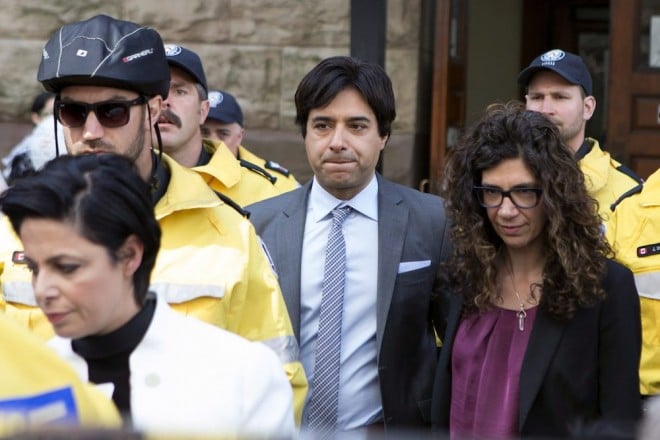 “Every day, over the course of a three year period, Mr. Ghomeshi made it clear to me that he could do what he wanted to me and my body. He made it clear that he could humiliate me repeatedly and walk away with impunity.” Yesterday, standing on the steps outside a Toronto courthouse where the final sexual assault charge against Jian Ghomeshi had just been withdrawn, Kathryn Borel explained what it had been like to work as a producer on the CBC Radio show Q. (Full disclosure: I was an occasional contributor to Q while Ghomeshi was host, and continue to appear on the new incarnation of the show hosted by Shad.)

There was the inappropriate touching and language, she said, but also the erosion of her self-esteem as the host harassed her and their supervisors looked the other way. “The relentless message to me, from my celebrity boss and from the national institution we worked for,” she said, “was that his whims were more important than my humanity or my dignity.” (You can read Borel’s full account of what happened to her here.)

Two months ago, Ghomeshi was acquitted of four counts of sexual assault and one count of choking. The trial had been a painful spectacle. Ghomeshi’s lawyer Marie Henein savaged the credibility of the three women who alleged that Ghomeshi had been sexually violent with them on dates without their consent. Those women were later characterized by Judge William Horkins as being “deceptive and manipulative in giving their evidence.”

Borel had been scheduled to appear as a witness in a second trial in June. Instead, she and the Crown agreed to withdraw the charge in exchange for an apology and a peace bond, which forbids Ghomeshi to have any contact with her for 12-month period. In his apology, Ghomeshi said to Borel, “I was a person in a position of authority and leadership, and I did not show the respect that I should have to Ms. Borel…. I failed to understand and truly appreciate the impact of my conduct on Ms. Borel’s work environment.” Ghomeshi also submitted a letter from his therapist, who noted that in their sessions they have “explored dynamics of power and control, and the intersections between gender and social constructions of status and influence.”

Considering the attention given to the last trial, the intimate details dredged up in court, the lengthy investigation at the CBC, the hundreds of opinion pieces and panels about sexual violence, and stacking all of that against the realities of the criminal justice system, it was inevitable that the conclusion to this case would be a let down. Borel, and the three women who were witnesses in the previous trial, became in a way, proxies for all women, and the case became a starting point for bigger conversations about sex, consent and power, and about how women are treated at work and by the justice system. Collectively, we hoped the trials would offer catharsis. Which is why Ghomeshi’s apology with its carefully crafted legalese, feels so wanting. It’s a meagre non-answer to all these larger questions we’ve been discussing and debating. Questions like, what makes a man think it’s okay to hurt and humiliate women? And why don’t we believe women who’ve been mistreated?

Ghomeshi had presented himself an enlightened feminist man — it was why, at first, so many found the allegations against him hard to believe. On his show, he talked a good talk. He interviewed women about internet trolls and rape culture. He opined about sexism in his opening monologues. Borel said she put up with Ghomeshi’s abusive behaviour because she was worried that if she complained, it would ruin her career. She only went public, she said, after seeing the courage of other women who made allegations against him. The evidence against him in her case seemed stronger than in the previous ones — there was a witness prepared to confirm Borel’s account, and the CBC’s own investigation revealed Ghomeshi had bullied a number of staff.

Yet, in the end, Borel felt that withdrawing the charge “seemed like the clearest path to the truth.” In a “perfect world,” she said people would be punished for sexual violence, but in this case she believed a trial would have “maintained his lie, and would have further subjected me to the very same pattern of abuse that I am currently trying to stop.”

In her own statement to the public, Henein said she hopes Ghomeshi can now finally “move forward.” Cynics on Twitter are already predicting how soon it will be before he lands a book contract or some other media gig. Borel, by the way, already had to move on: After being unable to get protection from Ghomeshi at work, she quit her job at Q and moved to the U.S. Yesterday she closed her public statement with this: “I think we all want this to be over. But it won’t be until he admits to everything that he’s done.”

More columns by Rachel Giese:
Here’s why we need gender-neutral washrooms
‘I hope your boyfriend beats you.’ The PSA every man you know should see
Moving away is no solution for the people of Attawapiskat