Everything You Need To Know About The Televised Impeachment Hearings

It’s the biggest show in the U.S. 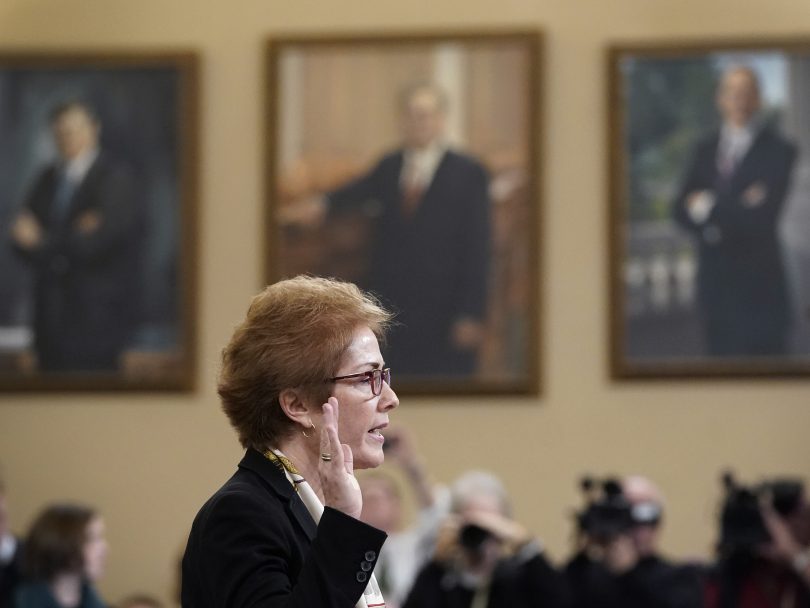 Former U.S. Ambassador to Ukraine Marie Yovanovitch is sworn in prior to providing testimony before the House Intelligence Committee (Photo: Win McNamee/Getty Images)

Get ready for round two. Millions of Americans will again tune in Tuesday as every major U.S. news outlet airs the second week of live impeachment hearings.

The crux of it: Did Donald Trump commit an impeachable offence when he withheld military aid for Ukraine while pressuring Ukraine’s new president to pursue two debunked conspiracy theories alleging corruption by Joe Biden and his son, Hunter, and Ukranian interference in the 2016 presidential elections?

The public impeachment hearings began last Wednesday, continued on Friday, and meanwhile, more closed-door hearings have unleashed new revelations in the scandal that has gripped the nation. Democrats consider the proceedings damning. Republicans dismiss them as a “witch hunt.” Here’s what you need to know.

What are the big takeaways so far?

Last week, the first witnesses of the public impeachment hearings drew the president closer to the centre of the scandal, as 13 million Americans watched.

On Wednesday, William Taylor, the top American diplomat in Ukraine, testified that one of his aides overheard European Union ambassador Gordon Sondland talking to Trump on the phone. During the call, the aide said he heard Trump ask about “the investigations,” and Sondland then told the aide that Trump cares about the “investigations of Biden,” not Ukraine’s key geopolitical role as a democratic defence against widening Russian influence (the two countries remain mired in a military conflict). The testimony of another State Department official in charge of Ukraine policy underlined the potential damage to Ukraine-U.S. relations of “politically motivated investigation.”

Because the White House has claimed executive privilege over most of Trump’s conversations with senior officials (for instance, those with his chief of staff, Mick Mulvaney), the testimony offers a rare glimpse into Trump’s behind-the-scenes comments about Ukraine during the months when his administration was holding back US$400 million in military aid while insisting that Ukraine publicly announce an investigation into former Vice President Joe Biden, then the Democratic frontrunner for the 2020 presidential election and thus Trump’s top political opponent. In the end, Ukraine received the aid without launching the investigation. Mulvaney is among a handful of senior aides refusing to testify. Trump himself tweeted that he’d consider testifying in the “phony Impeachment Witch Hunt.”

….that I testify about the phony Impeachment Witch Hunt. She also said I could do it in writing. Even though I did nothing wrong, and don’t like giving credibility to this No Due Process Hoax, I like the idea & will, in order to get Congress focused again, strongly consider it!

Then on Friday, Marie Yovanovitch, the former U.S. ambassador to Ukraine, detailed a smear campaign against her fuelled by “Ukrainians who preferred to play by the old, corrupt rules” who found allies in the Trump administration, namely his personal lawyer, Rudy Giuliani. Trump abruptly fired Yovanovitch from her post in April. Yovanovitch also said she was “appalled, devastated” to hear the president disparage her in a July phone call with Ukraine’s president, Vladimir Zelensky—the phone call that sparked the impeachment proceedings.

As she was testifying, Trump attacked Yovanovitch on Twitter, declaring that “Everywhere Marie Yovanovitch went turned bad.” Adam Schiff, the top Democrat on the House Intelligence Committee, accused Trump of witness tampering, and many noted that it was the female witness who Trump went after, not the men. (Yovanovitch, asked about the tweets just after they’d been posted, called the president’s comments “intimidating.”)

Later, in a closed-door hearing Friday, the aide who overheard Trump’s conversation with Sondland about “the investigations” confirmed his story to lawmakers.

Sondland, the ambassador to the European Union, will testify on Wednesday.

Before that, on Tuesday, the committee will hear from four witnesses, including Ukraine and Russia experts from the National Security Council, a national security aide to Vice President Mike Pence, and a former special envoy to Ukraine.

Jennifer Williams, Pence’s aide, has already said in a closed-door deposition that Trump appeared to be acting for personal political gain, rather than foreign policy goals.

A total of eight witnesses are scheduled to testify over Tuesday, Wednesday and Thursday.

How did we get here again?

These hearings represent the culmination of weeks of Democratic-led investigations into Trump’s actions toward Ukraine, originating from a whistleblower way back in September (read this for a more in-depth look at the backstory). Impeachment investigators are also looking into whether Trump lied during the Mueller probe into Russian interference in the 2016 election.

The pivotal evidence came in late September, when the White House itself released a summary of a July call between Trump and Zelensky, during which Trump asked Zelensky for “a favour,” that is, an investigation into Biden and his son.

What followed was weeks of private, closed-door hearings by the House Intelligence Committee to gather depositions from potential witnesses—a process that infuriated Republicans, some of whom stormed the proceedings. Those depositions were routinely leaked to the press, and amounted to thousands of pages of testimony.

On October 31, believing that they have the evidence they need to convict, the Democrat-majority House of Representatives voted to officially begin the public impeachment hearings, which Republicans unanimously opposed.

What’s been the political fallout?

It’s been entirely, bitterly partisan. Last week, House Majority Leader Nancy Pelosi accused the president of bribery and Schiff characterized Yovonovich’s testimony as a “story about the President’s efforts to coerce, condition, or bribe Ukraine for political investigations.” Democrats in general have sought to underline the extensive civil service records of the witnesses, painting them as fair and unbiased observers.

Meanwhile, Republicans and Fox News have characterized the testimony as part of an elaborate performance designed by “sore losers” out to remove Trump from office by any means they can. Fox News opinion hosts called the hearings a “Shiff show,” and a “disaster” for Democrats. Trump—who spent the weekend tweeting out favourable coverage from Fox News, praised another Fox host on Sunday morning and called the proceedings “Fake Impeachment.”

Meanwhile, political commentators have been pilloried by late night shows for bemoaning the hearings’ lack of “pizzazz.” Yup: Some American observers believe the impeachment hearings are “dull.”

Saturday Night Live had the best take: In its opening montage, it recast the impeachment hearings as an episode of the penultimate daytime soap opera of the 1990s—the beloved Days of Our Lives, or, ahem, “Days of Our Impeachment… where the only thing at stake is democracy.”

That’s up to House Democrats. The House Intelligence Committee will hold however many hearings it deems necessary to establish its case that Trump should be impeached. The matter will then move to the House Judiciary Committee to write up articles of impeachment, and the House will then hold an impeachment vote, which is likely to pass.

Under the U.S. Constitution, it’s the job of the House to investigate potential presidential crimes, but not to adjudicate them. Thus, the proceedings would then move to the Republican-controlled Senate, which acts as the jury. Only if the Senate were to convict Trump would he would be removed from office, a possibility—however unlikely. As for how long this will all take, that remains an open question. Pelosi told media over the weekend that she has “no idea” if the House will vote on whether to impeach Trump by Christmas.