Women have reached 91 percent of the education levels achieved by men, but their rate of employment is just 70 percent, according to study that looked at data from 150 countries over 20 years. 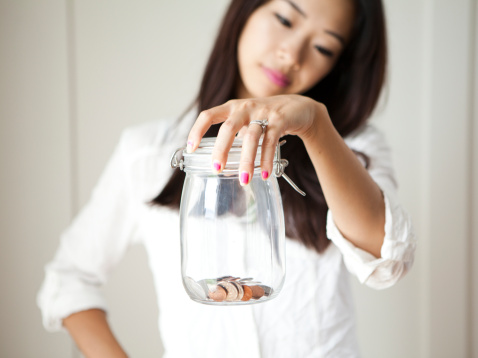 It’s been a major plank in the fight for global gender equality since the beginning: Get girls into school, and the rest will follow — quality jobs, better political representation, the same opportunities for women as for men.

But education just doesn’t do enough to level the playing field, according to a new study out of the University of Vermont’s economics department that looked at gender equality indicators over 20 years in 150 countries.

Researchers found while women have reached 91 percent of the education levels achieved by men in the past two decades, their rate of employment is just 70 percent, and they make up only 25 percent of those in elected office.

The report comes amidst renewed attention on inequality between men and women in the workforce, particularly in how they’re paid: Analyses of Ontario’s “Sunshine List” (which publishes the salaries of public sector employees who rake in more than $100,000 a year) found far fewer women on that list than men — and the women on it tended to make less than their male counterparts. According to Statistics Canada, Canadian women are paid, on the whole, 73.5 cents to every man’s dollar.

“Mainstream economists argue that inequality is due to skills differences between people and therefore gender inequality has often been linked to gender differences in educational attainment,” says study author and economics professor Stephanie Seguino.

The assumption was that the “invisible hand” of the economy would provide the best opportunities to those worthy of them “but that’s not happening.”

Seguino analyzed data from sources such as the World Bank and the International Labor Organization to look at the gains made in gender equality between 1990 and 2010. And there have been huge strides — more than half the world’s education rates are now up roughly 40 percent from the 33 percent level in 1990. But women with as much educational attainment as men — or more, as in the case of Latin America — are working more precarious jobs in a globalized world where low-paying, insecure jobs are more plentiful than the full-time gigs with benefits. 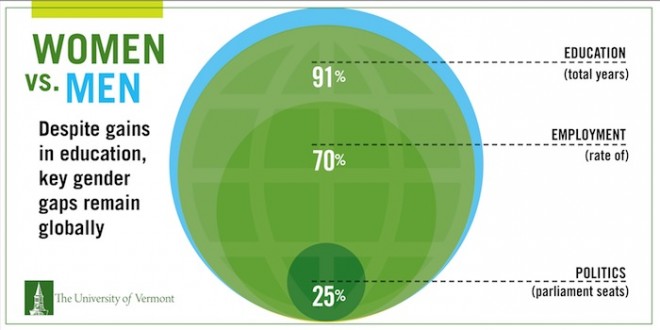 In other words, Seguino says, “women have been educated at the wrong time in history.”

Seguino found two reasons why women worldwide have lower employment levels and lower pay: they’re more likely to be excluded from higher-paying jobs, and they still do a “disproportionate” amount of unpaid household work, which often involves caring for children and elderly parents.

Policy changes to support caregiving (and encourage more men to do the caregiving) would alleviate that burden, she says. So would better childcare supports.

And while many are skeptical of the idea of a gender quota to ensure women are included in high-paying positions, the report highlights Canadian Prime Minister Justin Trudeau’s move to create an equitable federal cabinet as a step in the right direction. Norway, for example, has seen companies be no less profitable since mandating 40 percent of boards be made up of women. Canada’s business boards have celebrated an increase in representation lately too — a 2.4 percent increase in 2015, the largest in a year since 2001, according to the Canadian Board Diversity Council’s latest annual report.

The not-so-awesome news? Women only make up 19.5 percent of members sitting on the boards of the biggest organizations in this country. So there’s some room for improvement.

More: I tried to warn women about Jian Ghomeshi — and it nearly destroyed my life Q&A: Arianna Huffington on the science of sleep Memoir: The baby girl I almost had