The final charge against Ghomeshi was withdrawn today and the former broadcaster delivered an apology for his workplace behaviour. 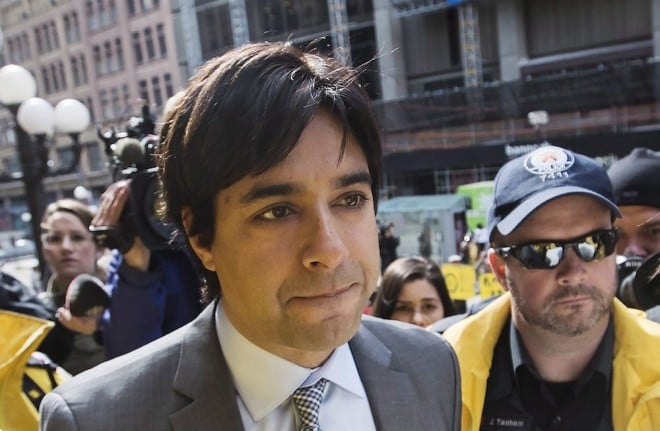 Jian Ghomeshi arrives at court on May 11, 2016. Photo, The Canadian Press/Mark Blinch.

Summary: Jian Ghomeshi agreed to a peace bond in court and delivered a verbal apology to complainant and former Q colleague Kathryn Borel. Justice Timothy Lipson withdrew the charge of sexual assault at the Crown’s request. Crown Michael Callaghan filed a letter from Ghomeshi’s therapist into court, confirming that Ghomeshi is “committed to working on his personal issues which led to the behaviour for which he was charged.” It also provided assurance he wouldn’t engage in similar conduct in the future. Callaghan said the letter, paired with the apology, is sufficient in serving the public interest. All-totaled, the proceeding only lasted about 20 minutes.

Peace bond: Ghomeshi was ordered to keep the peace and be of good behaviour for 12 months, during which time he may not possess weapons or have direct or indirect contact with Borel. If Ghomeshi violates the bond, he could be sentenced to jail time. The surety was set at $500. Click here for a full explainer of the peace bond.

Ghomeshi’s apology: After signing the bond, Ghomeshi walked to the podium in front of Justice Lipson and took a long pause before addressing court for the very first time. He read the apology with a voice unfamiliar to Q listeners — slightly higher, his phrasing more clipped. In a deliberate tone, Ghomeshi apologized to Borel for his behaviour towards her in the workplace. He said he spent the last 18 months reflecting on this incident and had come to terms with his “deep regret and embarrassment.” He admitted his conduct at work was “sexually inappropriate,” especially given his position of power (he was Borel’s boss at the time). “I now recognize that I crossed boundaries inappropriately,” he said, adding that he understands he was “thoughtless and…insensitive” to how his actions impacted her. “I regret my behaviour at work with all of my heart and I hope that I can find forgiveness from those for whom my actions took such a toll.” The apology was backed by the therapist’s letter, which stated that Ghomeshi “continues to take accountability for his choices and actions, and continues to explore and practice skills that support healthier relationships.” Ghomeshi admitted no criminal wrongdoing. 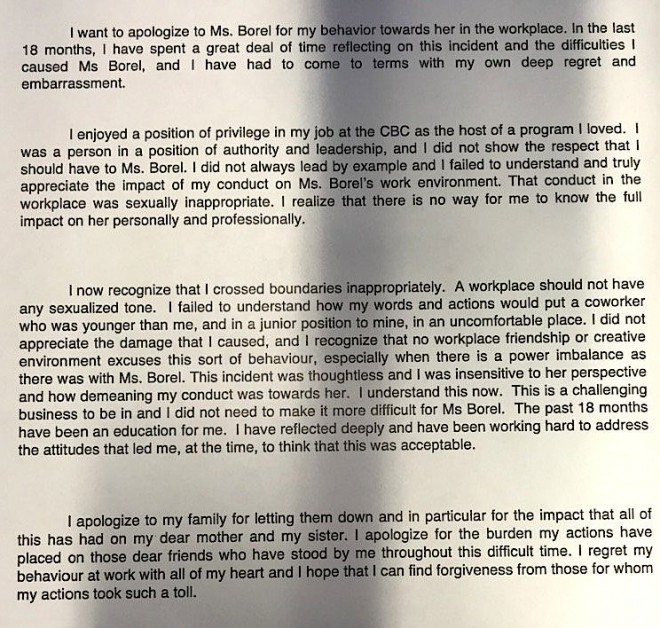 Henein’s statement: After Ghomeshi’s apology, defence attorney Marie Henein rose to thank the Crown for doing the “right thing” in agreeing to a peace bond. “In the last 25 years in the criminal justice system, I have never seen a case like this one,” she said. “I have never had a client be the subject of such an unrelenting public scrutiny and focus.” Henein urged the Canadian public to “move forward” and focus on what she called “equally important matters in this country that the public wants to know about.”

Borel’s statement: After court adjourned, Borel walked down the steps of Old City Hall and provided a statement that damned both Ghomeshi and the CBC. “Up until recently, I didn’t even internalize that what he was doing to my body was sexual assault. Because when I went to the CBC for help, what I received in return was a directive that yes, he could do this, and yes, it was my job to let him,” she said. “The relentless message to me, from my celebrity boss and from the national institution we worked for was that his whims were more important than my humanity or my dignity.”

Borel said she was prepared to forego trial because the defence offered an apology, which she considered to be “the clearest path to the truth.” “A trial would have further subjected me to the very same pattern of abuse that I am currently trying to stop,” she said before thanking other women who came forward with allegations that Ghomeshi had “punched and choked and smothered and silenced them.”

She concluded with a call for Ghomeshi to acknowledge all the allegations against him: “I think we all want this to be over. But it won’t be until he admits to everything he’s done.”

Inside the courtroom: Once Justice Lipson accepted the peace bond and court was adjourned, Ghomeshi and Henein rose, turned to each other and embraced with smiles on their faces. Ghomeshi then hugged his mother, sister and two other supporters in the front row. As the public and media filed out, he stood with his hands clasped in front of him, looked up at the ceiling and let out a long sigh.

Outside the courtroom: A clutch of protesters gathered with signs saying “We Believe Survivors,” they also drew the words on the courthouse steps in chalk and strung white balloons on a nearby fence to honour sexual assault survivors. Witness 1 in the Ghomeshi trial, Linda Redgrave, joined the protest and told reporters she felt Ghomeshi’s apology Wednesday meant very little. “It was that or go to court … he admitted to wrongdoing,” she said. “Where’s my apology? Where’s Lucy [DeCoutere]’s apology, where’s Witness 3’s apology?”

More:
Ghomeshi accuser Kathryn Borel’s message to the public
Ghomeshi to sign peace bond, issue apology. Here’s why
I tried to warn women about Jian Ghomeshi — and it nearly destroyed my life