The first debate between Donald Trump and Joe Biden was uncivil, uninspiring and at times difficult to follow. It was America in 2020. 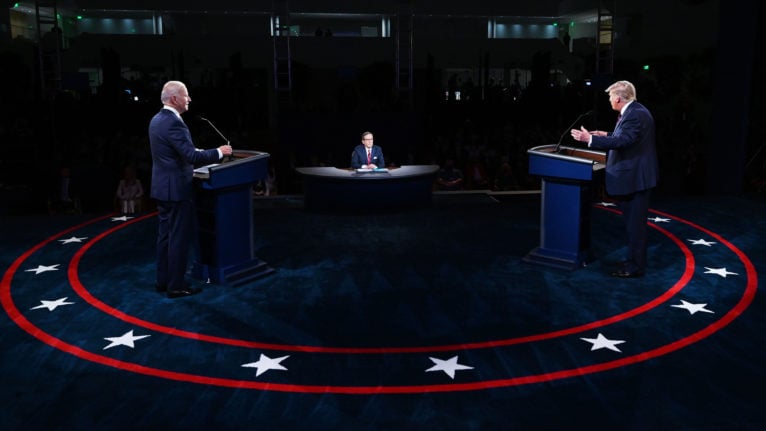 During the first presidential debate of 2020, President Donald Trump was a perfect caricature of himself, speaking in hyperbolic soundbites that couldn’t have sounded more off-the-cuff. Former vice president Joe Biden appeared alternately incredulous, amused, confused and pained by the experience, letting out a “Would you shut up?” within the first 20 minutes of Trump’s incessant interjections.

The event, exactly five weeks before election day, was expected to be the most-watched political event in United States history, including outside the U.S. If you only lasted a few minutes before turning off the TV in frustration, don’t worry—we’ve got you. Here are five takeaways from the pandemic-era spectacle.

Could anyone—especially any Canadian—have come away with any other impression? The void between the two candidates vying to be president is huge, and the two spent more time attacking each other than discussing the myriad catastrophes facing the United States in 2020.

Trump interrupted and disrupted moderator Chris Wallace, of Fox News, enough to make the entire scenario feel outmoded. Enough to make Wallace plead with Trump that “the country would be better served” if he made fewer interruptions. Enough to make Wallace visibly agitated, raising both his hands in frustration, agreeing with Biden near the end of the event that it had been hard to follow the debate.

More than once, Trump launched personal attacks, from Biden’s college record to his son. More than once, Biden insulted the president, calling him a “clown,” a “racist” and a “liar.” More than once, the three-way repartée devolved into yelling matches that were difficult to follow (even for viewers not engaged in a debate-themed drinking game—we see you). After all that, knowing that debate rules prohibited even a hand shake, we could still have imagined the two coming to blows at the end of the event.

It was not an inspiring performance on the issues that have topped the agenda in 2020. Trump downplayed his responsibility for a COVID-19 death toll that has surpassed 200,000, saying “people know what to do” in terms of their health, but took responsibility for the return of football. He flip-flopped on whether masks were helpful. “You would’ve lost far more people,” he told Biden, later pivoting to attendance at his campaign rallies. “He’s been totally irresponsible,” Biden said, attacking the president’s inconsistent approach. “He’s a fool on this.”

On systemic racism, the two traded barbs and argued about statistics without offering much in the way of policy. Trump suggested that those who are raising issues of racism this year want Americans to hate their country. “He’s racist,” Biden said. Trump accused Biden of not being able to utter the words “law and order”; Biden countered, saying: “Law and order—with justice, where people get treated fairly.” Wallace invited Trump to condemn white supremacist groups. “Sure, I’m willing to do that, but I would say almost everything I see is from the left wing, not the right wing,” Trump responded. Biden pushed him to say it. Trump half-heartedly told the Proud Boys to “stand back and stand by,” then brought up the dangers of Antifa.

With orange skies and horrendous air quality setting the backdrop for west coast Americans in the lead-up to the debate, Trump dodged questions on climate science and suggested that “good forest management” would have prevented the annual burning of California.

Amid plenty of attempts by the Trump campaign to portray Biden as old and fragile, pre-debate analysis held that if Biden came across “with it”—relatively sharp, relatively informed and most of all not senile, that would be enough to make the debate a success for him. If Biden exhibited any hint of a senior moment, Trump, despite any flubs of his own, would exploit the hell out of that right up until the election.

This was just the first of three debates but Biden came across reasonably alert, when he came across at all, with Trump taking a majority of the oxygen. There were moments he appeared scattered, inarticulate or flustered by the president’s aggressive approach. But there were also moments where Biden confronted Trump, repeatedly shushing him. He looked straight into the camera and addressed the American people directly, telling them this debate should be about their priorities, and, “He (Trump) doesn’t know what he’s talking about.”

On balance, that Biden didn’t fall asleep at the podium was likely enough for him to exceed expectations.

On Sunday, The New York Times published an extensive report on the president’s tax history, reporting that in 2016 and 2017, Trump only paid $750 in federal taxes—a bizarrely-low bill compared to previous presidents’ regular six-to-seven-figure payments. Trump denied the report but has not released tax documents publicly, despite promising to years ago.

Biden released his own tax returns not long after the story was published. In 2019, he paid some $300,000 in federal tax, having paid bills up to $3.7 million right after leaving office. (It was a hot speaking circuit in 2017.)

Pundits expected Biden to lean heavily on the Times revelations, using Trump’s bill as an example of his disconnect with the government he runs and the American people. But it was Wallace who brought Trump the heat on the question, pushing for a timeline on Trump offering proof of his claim that he in fact paid “millions of dollars” in taxes the years that the Times reported he paid $750. “You’ll see it as soon as it’s finished,” Trump said.

5. Remember, remember, the fifth of November…

…we may still not know the results. The election is Nov. 3 but due to a large number of mail-in ballots it is possible that a final result will be delayed. The final, 100-per-cent-finished vote count for 2016 took a month. This year, we just don’t know how long it will take. Neither candidate is likely to concede on election night. But the question of whether the incumbent will accept the ultimate result—especially if it is at all close—did not really get answered on Tuesday night.

Despite an entire 15-minute segment devoted to the integrity of the 2020 election, during which Wallace pushed him on that question, it is still unclear whether Trump will accept anything other than a victory. Wallace asked if each candidate would urge their supporters to stay calm during the interim, not to engage in any civil unrest and not to declare victory. Biden answered in the affirmative, but Trump made no such pledge. He said he would encourage his supporters to go into polling places and “watch very closely,” because he expected vote-counters to “cheat.”

Instead of pushing Trump on whether he would accept a loss, Biden argued with Trump on minutia about mail-in ballots and their distribution. Trump said the ballots are “a disaster,” that ballots are being “dumped in rivers” and “this is going to be a fraud like you’ve never seen.” Biden ended the debate on almost a plea, saying he would accept the result and Trump would too. “He will too, you know why? Once the winner is declared, after all the ballots are counted, that will be the end of it.” And, for now, that was the end of it.