After charming Will and Kate in B.C. earlier this week, the PM met with another notable Brit in Ottawa to chat about gender inequality. 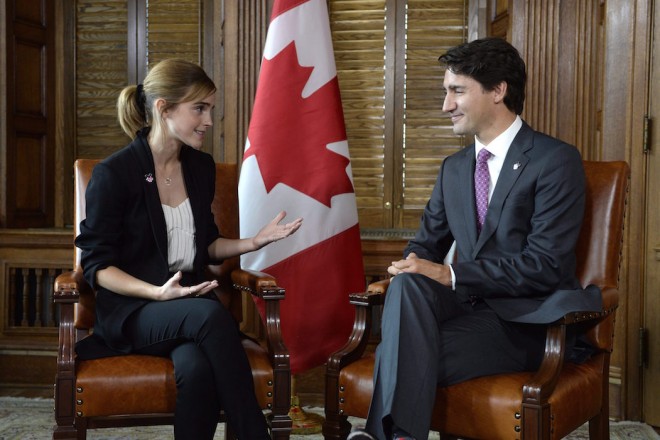 With little advance fanfare (compared to the visit from some other famous Brits) global gender equality activist Emma Watson dropped in to see Prime Minister Justin Trudeau in Parliament this week.

In Ottawa for the One Young World summit, the UN Women Goodwill Ambassador and Harry Potter actress praised the PM for making his cabinet 50 percent women when he took office last fall. It’s for that reason — and for his loud and proud self-declared feminism — that she bestowed him with an honour and responsibility given to a number of other high-profile men: an ambassador for HeforShe.

HeforShe is a UN-run global campaign designed to get more men and boys on board with ending gender inequality. Watson has been the face since it launched in September 2014, and has been bringing men into the conversation ever since. Trudeau joins Japan’s prime minister Shinzo Abe, Canadian actor Kiefer Sutherland and actor Forest Whitaker — among other political, academic corporate leaders — as a HeforShe champion.

Trudeau, more specifically, was given the role of “youth ambassador.” After their meeting Wednesday, the prime minister spoke at the youth summit — dubbed “junior Davos” — which chose Ottawa, in part, because of the PM’s age and his voiced commitment to gender equality and pursuing Truth and Reconciliation for Canada’s indigenous people.

“She’s had an extraordinary impact around the world making men champions of women’s issues which are everyone’s issues,” Trudeau told reporters while seated across Watson on Wednesday.

“I can’t wait to see what you’re going to do with that title,” Watson replied.