"This new deal with the royal family that was announced over the weekend changes everything." 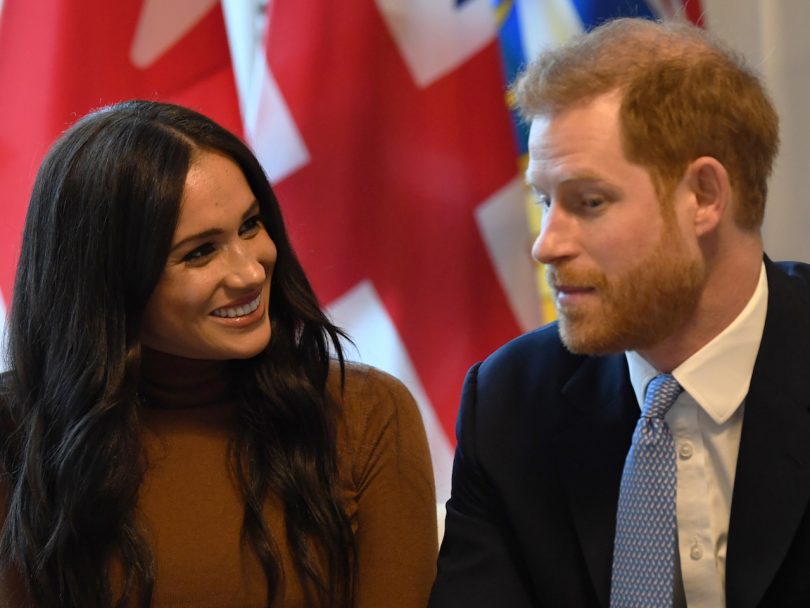 Since announcing their intention to reimagine their royal roles two weeks ago, the Duke and Duchess of Sussex have sparked even more interest and intrigue than usual—which is saying something. As the dust settles on the split heard ’round the world, we chatted with gossip guru Elaine Lui of Lainey Gossip about the most heartbreaking part of Prince Harry’s statement and why—hold onto your toques—Harry and Meghan may not be moving to Canada after all.

The Internet went nuts over the fact that Prince Harry flew Westjet to Vancouver Island on Tuesday morning. Were you surprised?

I think as Canadians we have a tendency to get really jacked up when our stuff makes headlines. It’s a bit of our little sister syndrome where it’s a thrill to see a thing that we consider home splashed around the world.

And maybe a little bit of surprise at the ordinariness of it all? This is the same couple who took heat for travelling by private jet last summer.

Yes, I think for the casual royal watcher this is a shock. There is this idea that there’s a golden throne in the sky that transports royals around the world. But the truth is that Harry and William fly low-cost carriers all the time. Meghan and Harry flew commercial to some of their holidays before they had Archie.

Does the fact that they have spent so much time in B.C. tell us something about which coast they are planning to make a home in?

I don’t think it tips the scales either way in terms of British Columbia vs. Toronto. Canadians are really excited at the possibility of the Sussexes living in our country. I am too. But here’s the thing: This new deal with the royal family that was announced over the weekend changes everything. When Meghan and Harry first went public two weeks ago, they hoped to be part-time working royals [meaning they would still receive some royal funding while also being able to earn their own income] and in that scenario living in a Commonwealth country would have been necessary. Now that they’ve been told they can’t do the half in/half out thing, that opens them up to America. And given that she’s American and given their plans for independent financing… Let’s just say it’s premature to declare Canada their place of residence.

But what about all the talk about how Canada was a good fit because we are quiet and they have friends here and we’re paparazzi free?

Well, they’ve been paparazzied three times in the last 24 hours, so I’m not sure that’s such a selling point after all. It’s ironic—given who they are and their profile, they might have an easier time maintaining a low profile in L.A.

I guess Harry and Meghan could move to a cave in Greenland, and the paps would show up.

Well there are several paparazzi agencies camped outside their place on Vancouver Island right now and they’ve been there for the last two weeks. They might as well be on a red carpet. A lot of people think [someone on Team Sussex] called the paparazzi [to arrange] those dog walking photos, but I think the fact that Harry and Meghan, through their lawyer, released a legal injunction warning media about posting them suggests otherwise.

Meaning they’re not your typical Hollywood celeb who secretly alerts the paparazzi to their whereabouts and then feigns outrage?

Right. I mean if this keeps happening on a weekly basis, we’ll have to revisit. But according to their cease and desist, the photos were taken from a long lens with paparazzi camped out in the woods.  I think [their desire for privacy] seems pretty legit.

Okay, let’s talk about everything that happened last weekend: the statement from the Queen on Saturday, Harry’s speech on Sunday. What are the big takeaways?

My personal biggest takeaway is a line from Harry’s speech, which he gave, not at a press conference, but at a private dinner for a charity that he founded and that he has worked with for a long time. He thanked the audience, saying “Together, you have given me an education about living,” which is very similar to what his mother Princess Diana said when she announced she was stepping back from her royal duties in 1993. I wrote about this on the blog yesterday, but basically it suggests that he’s able to relate to her experience when she said she felt trapped. Clearly he had his mom on his mind when he was making this decision.

What did Harry mean when he said in his speech that he had “no other option”?

I think he was saying that he had hoped to be able to remain a working member of the royal family, representing the Queen and Commonwealth and his military associations without public funding. He clearly wanted to continue to be useful and observant, but to have a little more independence and that proposal didn’t go through. The palace didn’t approve it. It was pretty clear how tough the decision was for him and how tough it has been for both of them over the last couple of years. I think he wanted to convey that #1, it wasn’t like he just woke up one day and thought, ‘okay, time to f-ck off.’ And #2, that these were decisions he made, so stop blaming her.

Because that seems to be the tone of a lot of the reactions we’re seeing in the media and on Twitter.

That is definitely the perception among the haters. It’s gross and it’s sexist and it’s racist: the narrative of the Black woman corrupting the pure white boy. That’s part of the reason all of this has happened, why the Sussexes made this decision

Why wasn’t there room for more of a half measure?

My assumption is that a lot of it had to do with establishing a new precedent. If the Sussexes are allowed to go half in and half out then it has to be consistent across the board. So other working members of the royal family could also go out and sign endorsement deals. Do we want to open that up to everyone in the royal family? To Prince Andrew?

On Lainey Gossip you talk about the way Prince Andrew’s own scandal (read: the accusation that he had sex with an underage sex trafficking victim) has often been overshadowed by the Sussex drama.

I just think it’s curious. Prince Andrew was seen in public for the first time in an official capacity alongside the queen at church the day after she made her announcement about Harry and Meghan’s new life. Harry and Meghan were the big controversy and suddenly her most controversial family member decides to step out. And now we’re hearing stories about how Prince Andrew has been his mother’s rock throughout this whole ordeal and it’s like, oh, are we rehabilitating his image on the backs of Harry and Meghan?

Apparently this new royal arrangement is going to be revisited in a year’s time. You’re pretty good at predicting gossip. Where are we 365 days from now?

I don’t think there’s going to be a revisiting. I think people are exaggerating the importance of that [part of the agreement]. A year from now I think Harry and Meghan are doing just fine, they’re not looking back. If anyone’s looking to go backwards, it would be the royal family.