8 Things Doug Ford Has Been Up To Lately

While Ontarians enjoyed the summer weather, Doug Ford and the PCs have been… busy. 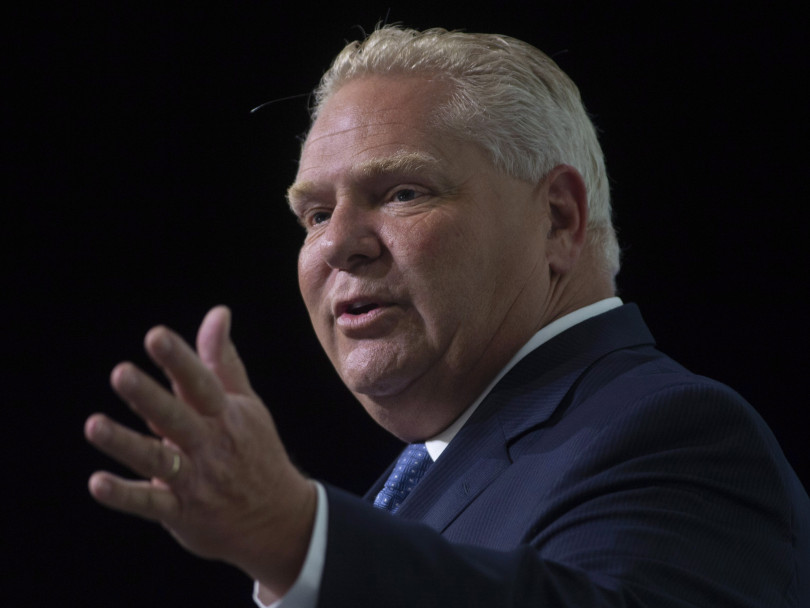 It’s been just over a year since Doug Ford and his majority government was sworn in. Since then, there have been numerous cuts, cancellations and controversies (catch up on what Ford and the Ontario PCs did during their first year in government here). Though Queen’s Park is currently on a controversial 144-day break until after the federal election in October, Premier Ford and his party haven’t taken the summer off. Here are eight recent changes enacted by the Ford government—and what the consequences might be.

On August 22, Ontario’s Education Minister Stephen Lecce announced that high school class sizes will only increase to an average of 22.5 students, according to a report from the Canadian Press. The government had previously announced that class sizes would increase from an average of 22 to 28 over four years. This means 3,475 fewer teachers in the system, but that will be done through not filling positions when teachers quit or retire—the government says there will be no “involuntary job losses.” Teachers have warned that the changes will lead to fewer course offerings and extracurricular activities, and that some classes, specialized ones, in particular, would balloon in size. Though class sizes will stay about the same this year, the size will still grow to 28 over the next four years, as planned by the PCs. Ontario is also currently in the middle of bargaining with teachers and education workers, and Leece says he is open to changing the plan to increase class sizes if teachers and boards can propose other ways to find cost savings.

Prior to this plan, the PCs had introduced a controversial temporary curriculum which was criticized for being a reversion to the 1998 curriculum, and which didn’t include information about same-sex relationships, sexting, consent, or gender identity. Like the scrapped 2015 curriculum, the newly announced one includes instruction on health, cyber safety, consent, sexting, sexual orientation and gender identity. The revised sex ed curriculum also includes an option for parents to have their children opt out of certain lessons.

The 2015 plan also allowed students to be exempted from certain lessons, but some school boards didn’t allow students to miss classes about sexual orientation, gender identity or similar issues as those areas are protected under the Ontario Human Rights Code. The PCs say a policy outlining procedure for parents who wish to exempt their kids from certain lessons in the newly announced curriculum (including human development and sexual health education) will be in place by November.

Writing in the Globe and Mail, Denise Balkissoon weighed in on the “new” plan:

“….public outcry has once again forced the Progressive Conservative government to reconsider its plans. But while this is a win for those – like myself – who believe that modern sex ed will help to keep children healthy and safe, it’s a tenuous victory. These backtracks are often just slowdowns: This week, the PCs went forward with plans to cut municipal public health and childcare programs, slashing that was put on hold after a bout of public indignation just a few months back.”

On August 19, the Ford government unveiled cuts to funding for municipalities that are set to take effect in January 2020. Under the new funding plan, municipalities will pay for 30 percent of public health initiatives such as vaccinations, kids’ breakfast programs, and water quality testing. (Previously, the province covered anywhere from 75 percent to 100 percent of these costs in certain municipalities.)

Toronto Mayor John Tory warned the cuts could affect the delivery of these crucial services. As well, municipalities will now be responsible for 20 percent of the cost of creating new childcare spaces in municipal daycares—which were previously fully funded by the province. Though these cuts are actually less than what had been previously announced—and then cancelled in May— by the Ford government, municipal leaders warned they would still threaten municipalities’ abilities to provide services.

On August 21, the Canadian Press reported that the Ford government will be taking Ontario’s information and privacy commissioner to court to prevent the release of the premier’s mandate letters to his cabinet ministers. In July 2018, CBC News filed a request for copies of Ford’s mandate letters, which outline key priorities for the cabinet ministers and acts like their mission statement. Their request was denied by the cabinet office. However, in an email dated July 31, 2018, obtained by CBC News this week, Greg Harrington, the executive director of policy to the premier wrote, “the intention is to keep them to ourselves as long as possible.” Brian Beamish, Ontario’s information and privacy commissioner, ordered the release of the letters by August 16. Beamish learned on August 14 that the government planned to take his office to court to prevent the release of the letters. Mandate letters are commonly used by provincial governments all over Canada and every other premier who issues them publishes them online to help the public to understand what the government hopes to achieve during its term.

Narrowing the scope of conservation authority programs and services

In response, Conservation Ontario, the umbrella organization that represents all the local conservation authorities, issued a media release on August 19 stating that they are “stunned” by the letter and that it is “confusing and extremely disappointing,” This move comes after the Ontario government cut conservation authorities’ funding for flood management by 50 percent earlier this year. (In case you didn’t know, conservation authorities provide flood warnings, monitor streams and regulate development in flood plains.) The Ford government’s cut has been criticized for irresponsibility in light of this spring’s extreme weather and flooding in parts of Ontario. Other authorities worry the move could further threaten already at-risk animals, and eliminate programs such as a release of endangered turtle hatchlings. “[Twenty-five] years of experience and work and rehabilitation could be at risk,” one biologist told the London Free Press.

In April, the PCs introduced legislation that would require government-mandated stickers attacking the federal carbon tax to be posted in gas stations across the province. Gas stations must display the stickers, which read, “The federal carbon tax will cost you,” by August 30. The province originally planned to fine gas station owners who don’t post the stickers up to $10,000 a day, but the Toronto Star recently reported that stations that don’t post the sticker will get a written warning instead. The Canadian Civil Liberties Association has complained the stickers “constitute compelled political speech and, at the very least […] an unreasonable violation of the Canadian Charter of Rights and Freedoms.” Even the Canadian Independent Petroleum Marketers Association found the PCs’ stickers “a bit partisan” and suggested a pie chart instead showing everything that factors into the price of gas, which the PCs rejected. The stickers cost Ontario taxpayers approximately $5,000 (and the stickers do not mention the cost to Canadian taxpayers of global warming, which has been estimated at $21-$43 billion a year by mid-century if we don’t take action now.)

In February 2019, the Ford government overhauled the province’s autism funding model and gave families a fixed amount of money determined by their income and their child’s age—funding for families would not factor in the individual cost of therapy and treatment that varies for each child, leading families to fear they will be unable to afford intensive and frequent therapy if needed.

On July 29, Social Services Minister Todd Smith reversed the February overhaul after months of backlash from families of autistic children, who said that it failed to address the diverse needs of those with autism.

Smith acknowledged that February’s redesign wasn’t working and that the PCs plan to move towards a “needs-based” system, which would provide funding based on severity, rather than age. As well, Smith announced that annual funding for autism would jump from $321 million to $600 million. And while this should be cause for celebration, it likely won’t quell the frustration that families have—especially since the new plan won’t be ready until April 2020. While some parents are pleased with the reversal, they are “still confused as to what will happen next year.” For now, Smith has promised “no gaps in service.” Children who are still receiving needs-based funding under the original funding model will continue to do so, while those who are already receiving funding under the new program will continue to receive it.

On July 28, Ford promoted Kingsville, Ont.’s Pelee Island Winery in a segment on Ontario News Now, the controversial promotional video service run by the provincial PCs. The video featured Premier Ford and Chatham-Kent-Leamington MPP Rick Nicholls touring the winery, and concludes with Ford telling viewers to “buy a bottle of Pelee Island wine, coming to a convenience store near you.” After the segment aired, Queen’s Park Briefing reported that the president of the winery, Walter Schmoranz, had recently donated $1,000 to the Ontario PCs. Combined with a  February 26 donation of $1,050, the additional $1,000 exceeds the annual $1600 contribution limit. Though the Tories assert that they returned the extra $450, and that the premier was unaware of the donation, the Pelee Winery episode highlights the PCs’ fondness for highlighting businesses on Ontario News Now that have donated to the party.

With files from The Canadian Press.