The anything-could-happen Conservative leadership race is in the home stretch. Catch up with our cheat sheet

There are 13 (yes, 13!) people in the running to be the next leader of the Conservative party. Here's what you need to know leading up to the convention in May. 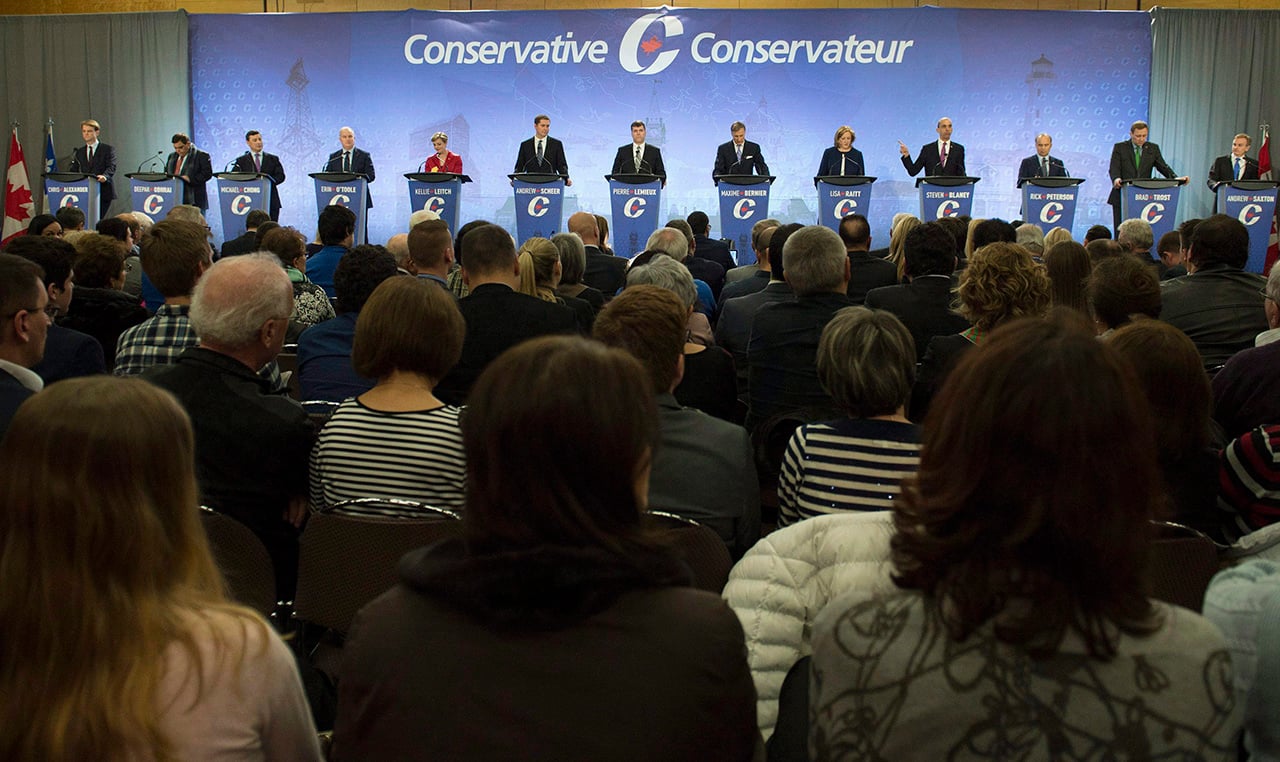 Update: Top Conservative party leadership contender Kevin O’Leary dropped out of the race Wednesday — the day of the final leadership debate in Toronto — and threw his support behind frontrunner Maxime Bernier. O’Leary says he did not have enough support in Quebec to win a general election, and he believes Bernier can win that support and beat Justin Trudeau in 2019.

The federal Conservatives are just weeks away from picking a new leader they hope will beat Justin Trudeau in the next federal election. The party is still regrouping after its crushing loss in 2015, which led to the quick exit of longtime party chief Stephen Harper. The search for his replacement — under the interim leadership of Rona Ambrose — has been filled with candidates (once 14, now 13) controversial campaign pledges (Kellie Leitch’s “Canadian values” test for would-be immigrants), early departures (here’s looking at you, Kevin O’Leary) and no shortage of debates (the final official debate is Wednesday April 26). Here’s our quick catch-up guide to the race.

This is the party’s first chance at a full revamp since Harper’s Canadian Alliance party and the Progressive Conservatives, under Peter MacKay, joined forces in 2003 to create the Conservative Party of Canada. The Tories led the country for almost 10 years until they were roundly defeated in 2015 by the Liberals’ promise of change. The trick will be to pick a leader who appeals to both the Conservatives’ base and the general electorate.

When and where will the leader be chosen?

Conservatives of all stripes will descend on Toronto May 26-27 for a leadership convention, at which the new leader will be chosen and announced. (Only card-carrying Conservatives who joined the party by March 28 can vote.)

How is the voting process going to work? Find out here. #cpcldr #cdnpoli pic.twitter.com/ipEqrvXZaX

How’s this all going to work?

Conservatives from across Canada will mail in their vote by preferential ballot or cast their ballot in person at the leadership convention. This means the victor, through process of elimination, will have to win 50 percent support plus one, calculated based on a points-per-riding system, writes CTV’s Laura Payton in her detailed explanation of the Conservatives’ complicated voting system. The system has members vote with their preferred candidate at the top of the list and then their next best picks in descending order, then the points are tallied up by riding (each of the 338 federal ridings across the country are worth 100 points). That makes it hard to pick a clear front-runner before voting day. It’s also why candidates such as Erin O’Toole have said they’re playing to be members’ second choice — they might win by running up the middle.

Who’s in the running?

Polls, fundraising records, name recognition and the number of endorsements a candidate can claim offer a sense of who the front-runners are (with a heavy warning that anything can happen on May 27th). Until recently, Maxime Bernier and Kevin O’Leary were the favourites. O’Leary’s sudden departure from the race leaves Bernier in the (apparent) lead. A CBC polling analysis by Eric Grenier placed Andrew Scheer and Erin O’Toole just behind the front-runner, thanks to their wealth of political endorsements.

Quebec MP Maxime Bernier is a libertarian (meaning he favours much-smaller government and lower taxes), a francophone (which would help the Conservatives win back some much-needed support in Quebec), and he’s charismatic to boot (a necessary quality in a match-up against Trudeau). Bernier’s a lawyer by trade, and held three cabinet portfolios under Harper, including foreign minister, during which time he gained notoriety for leaving confidential documents at the home of his former girlfriend, Julie Couillard. He recently became the only candidate to agree with Donald Trump knocking Canada for its trade rules protecting the dairy industry. Bernier scored a campaign coup by securing an endorsement from Kevin O’Leary, the departing Dragon’s Den and Shark Tank businessman who courted controversy throughout his short candidacy — but drew plenty of attention and support for pledging to run Canada like a business.

What young Conservatives really think about the candidates, Trudeau and “Canadian values”

Andrew Scheer, a Saskatchewan MP who was Speaker of the House under the Conservatives (and, not yet 32 when appointed, the youngest to hold that position), is well respected and has an impressive amount of support from Conservative MPs and strong fundraising. He’s been touting himself as a “real” conservative with his controversial pledge to deny funding to any university that tries to quash free speech on campus.

Erin O’Toole, former minister of Veterans Affairs and former Air Force captain is winning a ton of endorsements, including an important one from Atlantic Canada — the leader of the Nova Scotia Progressive Conservatives, Jamie Baillie (they worked together to bring the Nova Scotia PCs back to government in 1999).

Kellie Leitch is one of the more divisive candidates in the race, based on her pledge to screen new immigrants, refugees and visitors for “anti-Canadian values,” which she discussed at length in this strange video her team posted in February. This pediatric surgeon and former Harper cabinet minister (she held both the Labour and Status of Women files when the 2015 election was called) has been involved in Conservative party politics since she was a teenager and often rails against “media elites,” which has earned her fans amongst populist conservatives who want to see more nationalism in Ottawa. The most recent data has her in second place for fundraising. You might remember her from the “barbaric cultural practices” tip line announcement during the 2015 race. She’s so far pledged to legalize pepper spray if elected and delivered a speech in February against “politically correct nonsense,” related to the government’s anti-Islamophobia motion M-103.

Lisa Raitt, who was Conservative finance critic before stepping down to run for the leadership, is a successful cabinet minister and has won over members with her relatable personality. She’s banking on the public’s desire to return to a steadier Harper-esque approach to managing the economy, pushing job creation and investments in infrastructure. 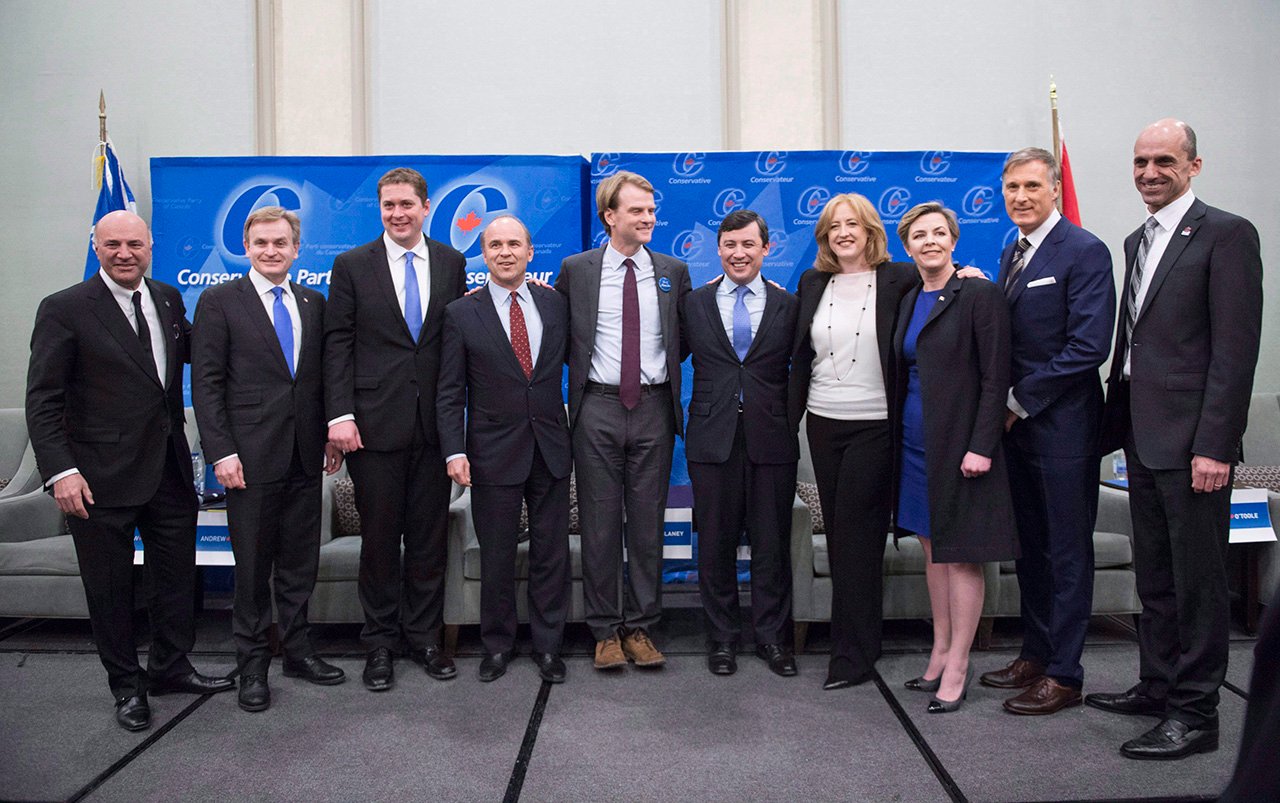 Michael Chong has positioned himself as a “progressive” conservative. He’s one of the only Conservatives to say he would support the Liberals’ anti-Islamophobia motion and is pretty lonely among Conservative party candidates in supporting a carbon tax. He got some interesting attention in March when Globe and Mail columnist Leah McLaren said she once tried to breastfeed his baby (without his knowledge) at a party years ago.

Steven Blaney, a Quebec MP, wants to revive the Harper government’s effort to ban niqabs from citizenship ceremonies. The Trudeau government dropped the government’s Supreme Court of Canada appeal on the issue in November 2015. The former minister of Public Safety and Emergency Preparedness has also promised to strengthen the powers of Canada’s security agencies to “substantially expand their current screening capacity regarding potential national security threats” and has emerged as a staunch defender of the Quebec dairy industry in response to Bernier’s siding with Trump on that issue.

Brad Trost and Pierre Lemieux see the search for a new leader as a chance to get social conservative issues back on the table. Trost, another Saskatchewan MP, is marketing himself as “100% conservative,” voicing support for the “traditional” definition of marriage and hinting at reopening the abortion debate. Lemieux is big on freedom of speech issues and attacking “chronic political correctness” in Ottawa. National anti-abortion group Campaign Life Coalition endorsed Trost and Lemieux on Monday.

Chris Alexander was Canada’s first resident ambassador to Afghanistan and Minister of Citizenship and Immigration under Harper. He took a lot of heat during the last federal election for not immediately responding to the Syrian refugee crisis. He’s pushing job creation, too, and lays blame at the feet of Trudeau for worsening the crisis in Syria.

Deepak Obhrai, a long-serving Calgary MP who served as parliamentary secretary to the Minister of Foreign Affairs, says he wants to build a Conservative party for a more youthful, multicultural Canada. Known for his playful sense of humour, Obhrai grabbed headlines for challenging O’Leary to a one-on-one debate (O’Leary declined).

Rick Peterson and Andrew Saxton are the lower-profile businessmen in the race. Peterson is a venture capitalist focused on appealing to business owners while Saxton is pushing equality-of-opportunity in his vision for Canada’s economic future.

More:
Subscribe to our newsletters
Here’s why it’s only going to get harder to put down your phone
Spring shoe guide: 48 affordable pairs that are perfect now and for summer