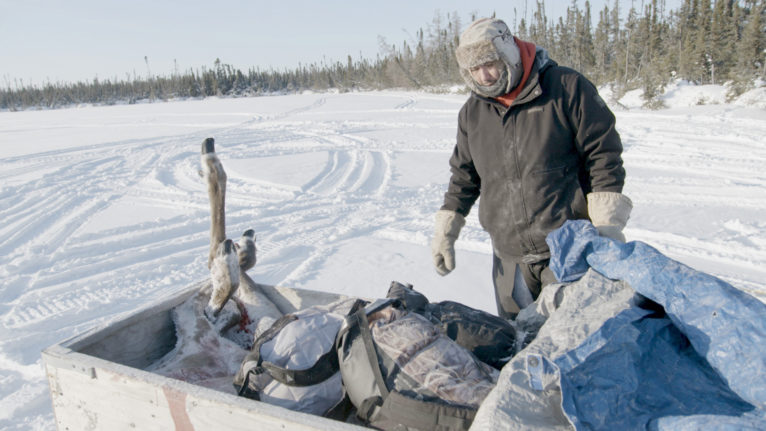 Kyle Linklater packing a hunted caribou onto a sled near Peawanuck, ON, December 16, 2019. (Courtesy of Daron Donahue/ Human Rights Watch)

While the entire country grapples with COVID-19, the international research and advocacy organization Human Rights Watch is shining a spotlight on another crisis being faced by Indigenous people in remote northern communities. Thanks to climate change, there are fewer fish and animals to hunt and it’s more difficult to harvest them, forcing Indigenous peoples to buy expensive and less nutritious food imported from the South. For example, in Peawanuck, a remote community on Hudson Bay in Ontario, fewer animals like caribou and snow geese are migrating to the area, with unstable ice and permafrost making it more difficult to hunt them in the winter.

In a new Human Rights Watch report, authors Katharina Rall and Rachel LaFortune argue Canada is violating the human rights of Indigenous people facing climate-related food insecurity, by failing to live up to emissions reduction targets and obligations to provide communities with the tools they need to continue to access traditional food. Maclean’s writer Claire Brownell asked them about their research, which involved two years of on-the-ground research in B.C., Ontario and the Yukon, including dozens of interviews with Indigenous people living on and off reserve. This interview has been edited for length and clarity.

Q: Why did Human Rights Watch decide this issue warranted such an in-depth examination?

Katharina Rall: We started reaching out to folks in First Nations we had previously worked with on the First Nations water crisis in Canada. There was a concern from several of those communities that they’ve seen more and more climate-change impacts—in relation to water but also in relation to food. Another reason is Canada is among the top 10 global [greenhouse gas] emitters. We think it’s really important the government takes these issues seriously and steps up to meet its promises.

Q: Some people reading this might be wondering why Human Rights Watch is focusing on Canada with this report, rather than a country with no effective rule of law or due process or legal protection for minorities. How would you respond to that?

Rachel LaFortune: I would point, first of all, to what Katharina previously said about Canada’s role as a top 10 global greenhouse gas emitter. I would also note that, when you look at emissions on a per capita basis, Canada moves even higher up the list of top emitters. So, in terms of responsibility for the global climate crisis, Canada has a particular role to play. It’s also worth noting that Canada’s record on Indigenous rights has been raised frequently over the years by U.N. treaty bodies and human rights experts. Canada is very much an important advocacy target.

Q: Can you give me a sense of what the stakes are here? How much is this affecting people’s lives now? How much worse could it get?

KR: We document how climate change impacts First Nations, specifically, looking at their right to food and health and culture. People told us in the interviews that they saw drastic reductions in the quantity of food they are able to harvest from the land. They’re experiencing increased difficulty and danger, because the ice freeze-up is happening later, or it’s less predictable. With less food, households must spend more, and supplement their traditional diets with food they buy at stores, which can be really expensive, especially in remote communities. People were telling us how dependent some families really are on school lunches. If it weren’t for existing school lunch programs, kids would not get enough to eat. Others are cutting back on meals. There’s increased risk, also, for people who are following diets in relation to health conditions such as diabetes.

All very concerning impacts that are obviously not exclusively a result of climate change. A history of colonialism and discrimination in these communities plays a role, here. Climate change is now adding to an existing problem—at a rate that is really concerning. We know that Canada is already warming at twice the global average. In the North, even three times the global average. We’re looking at a scenario that, of course, depends on decisions to cut emissions. But we’re looking at really drastic impacts in the years to come. In First Nations, but also across the country.

Q: You talk about the need for the Canadian government to strengthen its climate change policies to reduce emissions. What is Canada is doing now, and how does it fall short?

RL: Canada does have a commitment to reduce emissions by 30 per cent by 2030, based off of 2005 levels. The federal government has committed to exceeding this target. That said, the consensus is pretty clear that a 30 per cent reduction at this point is inadequate to keep global warming below the 1.5 degrees C needed to avert the worst impacts from the crisis. In any case, Canada’s current emissions show it’s really not on track to meet even the 30 per cent target. There have been some positive steps and commitments and acknowledgements of the harm that is already being experienced and that is likely to increase. That said, the current patchwork of policies and programs does fall short of meeting community needs. 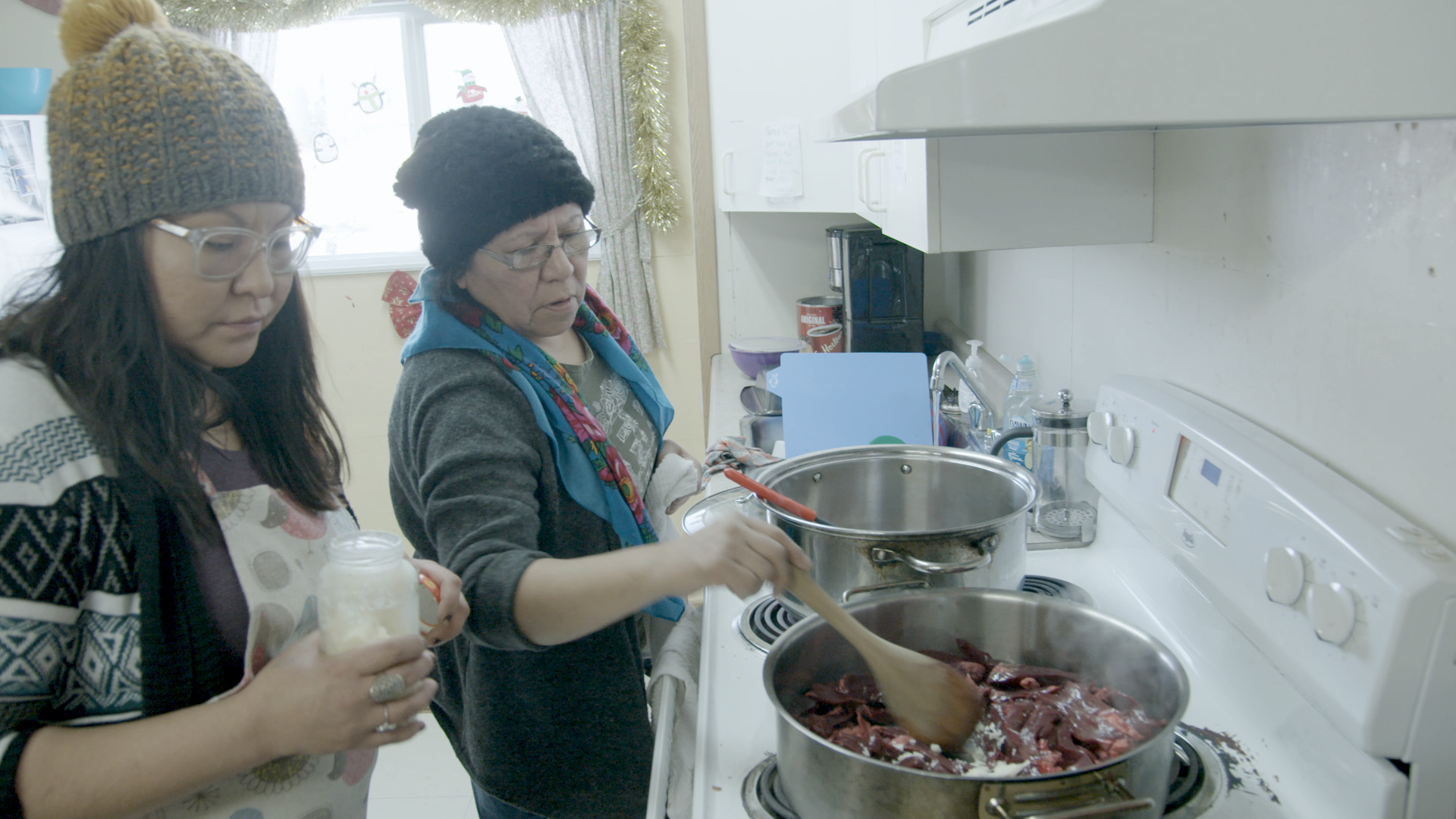 Q: You say the Canadian government should announce it accepts the right to food as a basic human right. What would that look like in practice?

RL: Some of that, on a concrete local level, would be supporting First Nations’ food security efforts. There are a lot of communities leading on efforts to proactively address climate impacts, whether that’s through greenhouse projects, local food production efforts. There isn’t enough funding to actively support the number of communities that are entitled to this assistance and need it. That would be a key step.

KR: This relates back to the question you asked in the beginning: why are we even looking at Canada? What does the realization of the right to food mean in that context? The acknowledgement of the right to food, of course, isn’t enough, but the government needs to take specific steps to implement that right. That entails, to begin with, an assessment and monitoring of the impacts of climate change on food insecurity in these communities. Without knowing what the impacts are, it’s impossible to address them. It’s a very clear obligation Canada has under international human rights law.

Q: You note that Trudeau promised to foster renewed nation-to-nation relationships with First Nations. But if you look at the government’s record in court, it’s quite adversarial. Have things changed much under Trudeau compared to his Conservative predecessors?

RL: While there have been a lot of promises from Prime Minister Trudeau and his government, the follow-through has not necessarily always been there.

KR: We’ve seen some positive first steps. Leading up to this report release, there’s been acknowledgement [by government] of some of these issues we documented. There’s also a commitment to address those. While the commitments are positive, they don’t help the people in the communities unless they’re actually implemented.

Q: This issue is very much in the news right now with the violence against Mi’kmaw fishers trying to exercise their fishing rights. I was wondering if you have been following that issue and what you think about how the government and police have been responding.

RL: The situation with the Mi’kmaw is one example of a larger pattern across Canada, which is that First Nations and Indigenous communities face significant obstacles to maintaining their cultural rights, but also rights to food. Some of that comes through the institutions of the Canadian state, and some is exacerbated by climate-change impacts. Which, of course, highlights the urgency with which the Canadian government should be looking to take concrete action to ensure First Nations across Canada are able to maintain key cultural practices, as they are entitled to both under human rights law and domestic law.

Q: Something you sometimes hear in response to this issue from people who maybe don’t know a lot about it is, if people are experiencing food insecurity in remote Northern communities and climate change is accelerating there at a faster pace, why don’t they just move to the South? What would you say to somebody asking that question?

RL: Communities have a right to maintain their cultural identity. That is tied to a connection to the land and to their traditional territories and resources. Asking First Nations, essentially, to assimilate in order to have access to basic human rights is really not an answer.

KR: We’ve documented that, across the world, the impacts of climate change are experienced most by communities least responsible for it in the first place, yet often not in a position to cope and adapt because of marginalization. Suggesting that First Nations, who have been very good at adapting to many changing situations that have been imposed on them, could just move, is not a response to a global crisis.

Q: Are there any other misunderstandings or misconceptions on this issue from Canadians who aren’t Indigenous or don’t live in Northern communities that you would highlight?

KR: We’re just looking at this from a human rights perspective. I think what we’ve documented makes it clear that the impacts First Nations are experiencing now are about so much more than the question of what food they can put on the table to feed their families. It’s also about their relationships with the land, about culture. In our interviews, we’ve heard how these impacts are really threatening their livelihood and their identity and what that means for physical health and mental health. We think of climate change as this kind of abstract thing that’s happening in the future and will eventually impact all of us. But it’s very concrete, what’s happening in these communities right now.