5 questions you probably have about Brexit

Will this affect you as a Canadian? Does this mean it's a good time to take vacation in London? 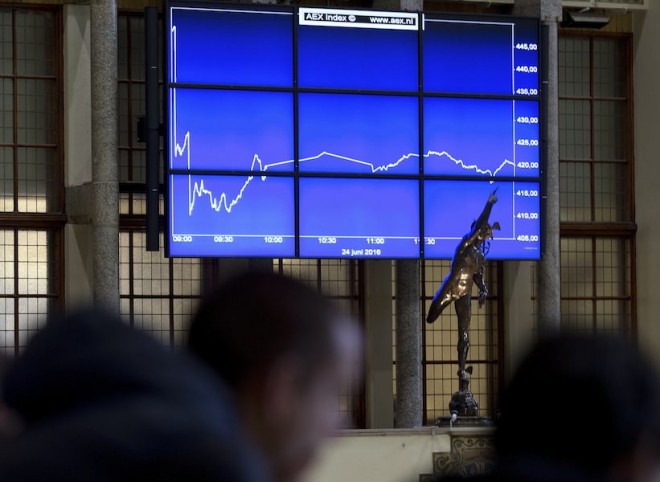 The British vote to leave the EU shook up financial markets around the globe. Peter Dejong/AP.

This article was originally published by MoneySense

Investors are ducking for cover in the wake of Britain’s shocking vote to leave the European Union. Stocks, bonds and currencies are seeing wild swings as traders–most of whom failed to predict the outcome–try to now make sense of the impact and anticipate what will happen next. Amid the predictions of ongoing market chaos and more countries to follow Britain’s exit, others say things will quickly settle down. So what does it all mean for Canadians, their portfolios and their wallets? MoneySense offers five key questions to consider:

OK Brexit is happening. Markets are tumbling. Is it time to start selling?

Short answer: no. The best advice is to ignore your portfolio for now and perhaps even consider making that early run to the cottage. The only exception might be for those investors who have cash and are in the mood to hunt for deals. Unless you’re heavily invested in Europe (and few Canadians are) then you really shouldn’t see much of long-term impact on your portfolio. Markets hate surprises, which is why global markets are almost universally in the red, but the selloff in North America is much more muted versus what’s happening across the Atlantic. Many of the European markets will end the day down between 7 percent and 12 percent (although London is only closed down about 3%). While BMO economist Jennifer Lee feels everyone should be concerned about what’s happening in financial markets, she says this isn’t a catastrophic event for Canadians.

Related: How to be your own investment adviser

As Sherry Cooper, chief economist at Dominion Lending Services points out in a note to clients, only about 4% of Canadian trade is with Europe and only roughly 3 percent with Britain. But that doesn’t mean the effects of Brexit won’t be felt here. The biggest impact on Canadian investors will be on the dollar and commodity prices. While the loonie is up 7 percent on the pound, it’s falling against the U.S. dollar. A big part of that is due to falling commodity prices, particularly oil, which is down more than 4 percent. If that continues, it’s a particular concern to Canada given how skewed our market is toward energy and material stocks. As economists cut their global growth outlooks in the wake of the Brexit vote, don’t expect energy and commodity prices to spring back over night, but they could start to firm up as some of the uncertainty subsides.

Am I going to catch a break on my European vacation this summer?

It may be crass to benefit from another country’s downfall, but Canadians who are Europe-bound are indeed going to have a little more spending power this summer. The pound touched a three-decade low immediately following the results of the vote, before regaining a little ground. In short, Canadians headed to Europe are going to catch a bit of a break on the exchange rate (although given how expensive things are in Europe you may not think so). Over the next few months as the dust clears, the pound is expected to firm up. But that could take months. Until then, relax and bon voyage. But with the U.S. dollar climbing relative to the loonie, that trip to the States just got a little more expensive, at least in the short term.

How else could this affect Canada?

One sector that could get a boost from Brexit could be the already overheated Canadian housing sector. What does the Canadian housing market have to do with Brexit? Well, nothing really, but the vote will likely force the Bank of Canada and U.S. Federal Reserve to hold off on making any interest rate hikes. Before Brexit, BMO anticipated the Fed would raise rates in July. But now they don’t see that happening until the end of the year. Canada, in turn, now isn’t forecast to raise rates until late-2017, which will keep mortgage rates at historic lows and invite more buyers in a frothy market.

So what should I do now?

For most of us, do nothing. If you have extra cash kicking around and have already been eyeing a few overseas stocks then this could be a good buying opportunity; otherwise, you may want to just wait this one out. “Even with all of this, investors should not panic sell this environment,” stresses Cooper in a note to clients. “It is a buying opportunity for longer term investors.”

Investors would do well to remember that it took Greenland three years to extract itself from the European Union. Britain is much bigger and much more divided, which means it’s going to take some time before we fully understand the ramifications of the Brexit vote.

More:
Restrictions on gay men donating blood need to be lifted — immediately
Men who intervened in Stanford sex assault show we can all be heroes
Can the Conservatives appeal to women? Well, they’re trying