6 Takeaways From A Historic Election Weekend

Including the first female, woman of colour vice president in U.S. history. 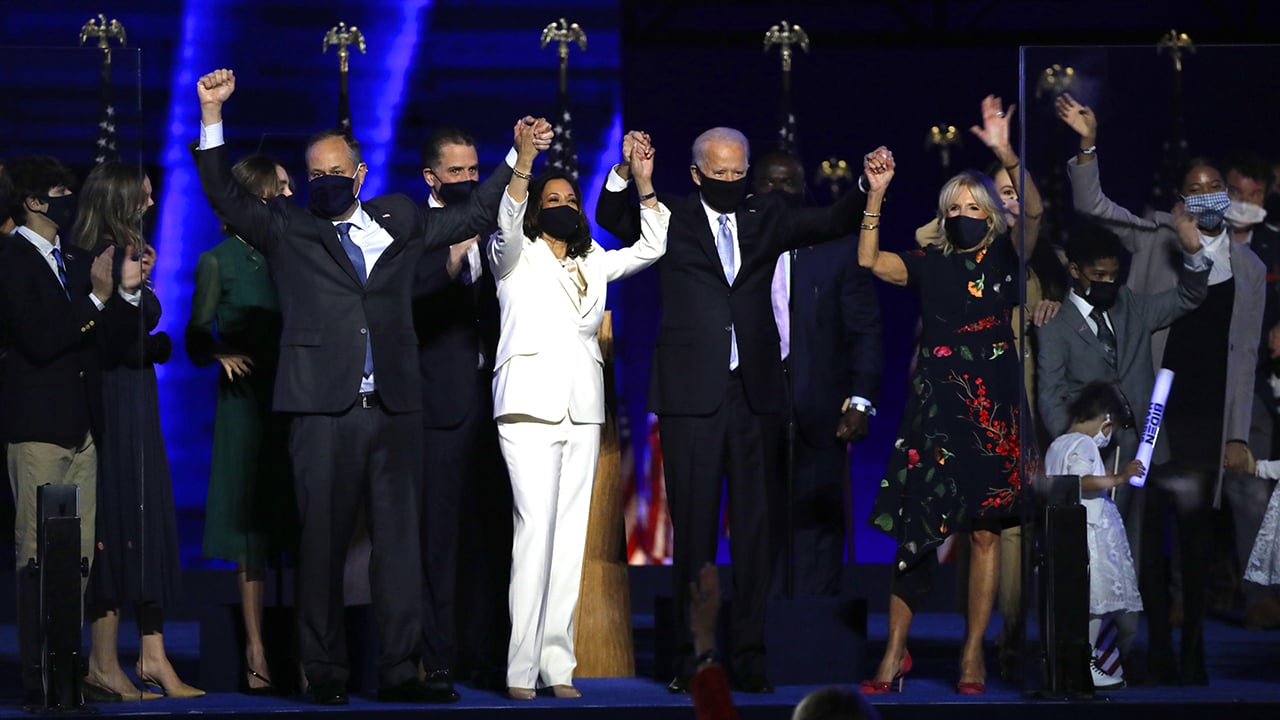 Shortly before noon EST on Saturday, history was made when Pennsylvania—and its 20 electoral college votes—was called for Joe Biden, pushing him over the 270 electoral college votes needed to beat the sitting president, Donald Trump. Celebrations ensued across the United States, and the world, with jubilant Biden supporters dancing, singing and popping bottles of champagne on the streets. (These celebrations occurred alongside ongoing, baseless claims of voter fraud.) The Democratic Party’s win was a salve for many following an incredibly difficult year, and it was also incredibly historic on multiple fronts. Here, six takeaways from this monumental victory.

While I may be the first, I won’t be the last. pic.twitter.com/R5CousWtdx

“While I may be the first woman in this office, I will not be the last, because every little girl watching tonight sees that this is a country of possibilities,” Vice President-elect Kamala Harris said in her victory speech on Saturday night in Wilmington, Delaware. She was dressed in all white—honouring women’s rights activism—and also spoke about her mother, Shyamala Gopalan Harris, who came to the U.S. from India when she was 19, and the generations of Black, brown, Asian, white, Latino and Native American women who “paved the way for this moment tonight.”

We did it, @JoeBiden. pic.twitter.com/oCgeylsjB4

The last presidential candidate to do so was Bill Clinton, who beat Republican President George H.W. Bush in 1992, then held on to the job for two terms.

The Democrats need 50 seats to control the Senate; following the election, the Republican and Democrats each hold 48 senate seats, with no party likely to take control until a runoff election for two seats is held in Georgia on January 5, 2021. (A runoff occurs when no candidate earns enough votes to clear a state-mandated percentage for victory.)

The New York Times has proclaimed the southern state—which typically runs Republican—“a new political battleground” after Biden eked out a narrow lead there that is headed for a recount. The state has not sent a Democrat to Senate in two decades, and much of the Dems’ newfound success there has been credited to Stacey Abrams—who ran for governor in 2018, lost by a narrow margin and became a staunch advocate against voter suppression.

Georgia, thank you. Together, we have changed the course of our state for the better. But our work is not done.

Join me in supporting @ReverendWarnock and @ossoff so we can keep up the fight and win the U.S. Senate➡️https://t.co/JTyH1UVEtd #LetsGetItDoneAgain #gapol pic.twitter.com/qH5ZfmsgI7

Trump has not conceded

To be clear, the current POTUS does not need to concede in order for Biden to become president on January 20, 2021—but doing so is the standard, and not to mention, the decent thing to do. However, as of Sunday afternoon, Trump has made no move to admit defeat, although CNN reports that his son-in-law Jared Kushner has broached the topic. (The White House disputes this report, but if it’s true, what we wouldn’t give to witness that conversation.)

Instead, since the election was called for Biden on Saturday, Trump has issued a series of petulant tweets that allege election fraud—with absolutely zero proof—most of which have been flagged by Twitter for misinformation.

In an official statement following the Biden call, Trump maintains (incorrectly!) that the election has not been won, and says that on Monday his team will “will start prosecuting our case in court to ensure election laws are fully upheld and the rightful winner is seated.”

Rudy Giuliani is here. “I’m here to describe to you the first part of a situation that is very troubling.” pic.twitter.com/3wfRk5Ot64

To that end, on Saturday afternoon, Rudy Giuliani—Trump’s personal lawyer—stood in front of a podium in Philadelphia to discuss alleged examples of voter fraud in the state. The event quickly went viral—though not for reasons that the Trump camp had hoped. Instead, it was the location of Giuliani’s speech—the parking lot of Four Seasons Total Landscaping, a Philly business which is adjacent to an adult bookstore and crematorium—that drew the most attention, as many assumed the event was incorrectly booked, and that the campaign meant to reserve the swanky Four Seasons hotel in downtown Philadelphia. (The New York Times says the landscaping business, “in a friendlier part” of the predominantly Democratic town, was always the intended venue.)

After he takes the oath of office, Biden says that the United States will rejoin the Paris climate accord. (The U.S. officially withdrew from the global agreement on climate change action on November 4.) Christiana Figueres, a key architect of the accord, was shown on Twitter jumping up and down over the news of Biden’s win.

Thank you, United States! The election of @JoeBiden is huge not just for America, but for the world. Here’s how it landed with @CFigueres to see that the US is on it’s way back into the #ParisAgreement #ElectionDay @UNFCCC pic.twitter.com/iaDpELx2mb

Biden also has his work cut out for him on getting COVID-19 under control—the disease is currently surging in the U.S., which saw a record 132,790 new cases on Friday. In his victory speech on Saturday, Biden said that as of Monday, he’ll “name a group of leading scientists and experts as transition advisors to help take the Biden-Harris COVID plan and convert it into an action blueprint that will start on January 20, 2021. That plan will be built on bedrock science. It will be constructed out of compassion, empathy and concern. I will spare no effort—none—or any commitment to turn around this pandemic.”

And, generally, the last part of January is looking pretty packed for Biden: the Washington Post has a rundown of other executive orders the new president reportedly plans to sign shortly after inauguration, including reversing “Trump’s withdrawal from the World Health Organization,” repealing “the ban on almost all travel from some Muslim-majority countries,” and reinstating “the program allowing ‘dreamers,’ who were brought to the United States illegally as children, to remain in the country.”

What Biden and Harris’ victory means for Canada

Congratulations, @JoeBiden and @KamalaHarris. Our two countries are close friends, partners, and allies. We share a relationship that’s unique on the world stage. I’m really looking forward to working together and building on that with you both.

Obviously, Biden will be a more predictable president, and the new administration promises to have a closer, less-fraught relationship with the Canadian government. And, as Edward Keenan points out in the Toronto Star, Biden’s win is a hopeful sign for Canadian politics, as “the nationalism, populism and misinformation tactics of Trump’s campaigns and government will look less attractive to Canadian politicians now that they’ve been defeated—for now, anyway.”

And a very personal congratulations to @KamalaHarris! Your victory is an inspiration to women & girls and to people of colour across our continent. I look forward to working w/ you to help both our countries crush this global pandemic & to crack more glass ceilings along the way.

Biden has also promised to stop the Keystone XL pipeline, which would carry crude oil from Alberta to refineries in the U.S. Gulf Coast. And, while the United States remains Canada’s top trading partner, Biden has vowed to ensure “the future is made in all of America,” which could concern Canadian manufacturers. If Biden is successful at curbing the coronavirus, border restrictions could ease.