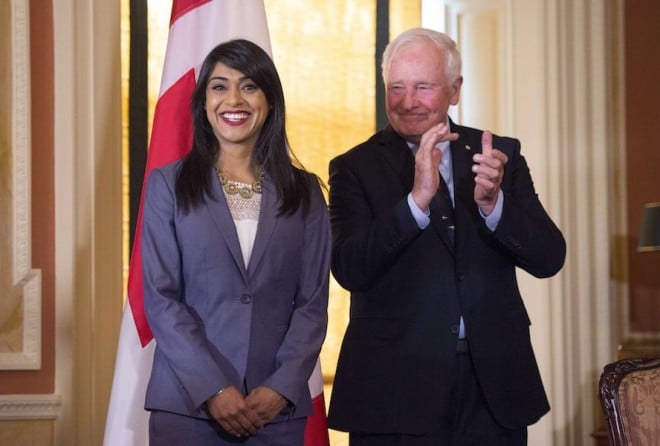 Prime Minister Justin Trudeau‘s government has made what it calls an adjustment to the federal cabinet, tapping Small Business Minister Bardish Chagger to taken on an additional job: government House leader. Chagger, who keeps her small business portfolio, replaces Dominic LeBlanc. She is the first woman to hold the position of House leader.

LeBlanc has been handling double duty as House leader and fisheries minister since Hunter Tootoo stepped down from the latter job. LeBlanc remains fisheries minister. Tootoo resigned from cabinet in May to go into treatment for alcoholism and has since acknowledged he had been involved in a consensual but inappropriate relationship in the workplace.

Chagger’s new job will see her shepherding the government’s agenda through the Commons. It’s a daunting challenge for a rookie MP who only entered the Commons last fall. However, she has some Parliament Hill experience. She was executive assistant to former Kitchener-Waterloo MP Andrew Telegdi.

The change may smooth feathers in the Commons. LeBlanc’s tenure as House leader was marked by some sharp clashes with the opposition. Some insiders say an attempt last spring to ram legislation through the House poisoned relations with opposition parties and created a toxic atmosphere in the Commons.

More:
The Olympic highs and lows that defined the 2016 Games for women
Rona Ambrose is on a mission to give Canadians more Canadian beer
I ate Michael Phelps’s Olympic breakfast so you don’t have to