City realizes there's no such thing as a beach body, bans lame ads

Ads that promote an unhealthy body image are soon to be banned from London, England's transit system. 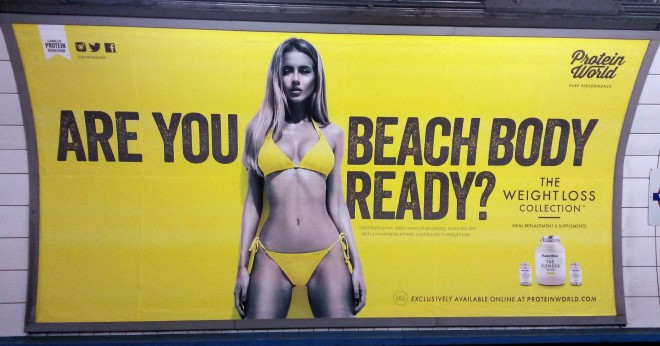 The controversial Protein World ad in the London underground, which was displayed in April 2015. Catherine Wylie/AP.

Last year, an ad in London’s underground for Protein World weight-loss supplements featured a slender woman in a bikini and the question, “Are beach body ready?” It prompted 378 complaints to the country’s Advertising Standards Agency, while a Change.org petition collected over 71,000 signatures calling for the billboard’s removal. The advertising watchdog decided it should be taken down due to concern over “a range of health and weight loss claims.”

Advertisements claiming their products will help you get that “perfect beach body” appear every summer, but London’s new mayor is trying to change that. Sadiq Khan is making good on his campaign promise to get rid of ads that promote an “unhealthy or unrealistic” body image by banning them on public transit beginning in July.

“As the father of two teenage girls, I am extremely concerned about this kind of advertising which can demean people, particularly women, and make them ashamed of their bodies. It is high time it came to an end,” Khan is quoted saying in a press release.

The mayor has also asked the transport agency to establish an Advertising Steering Group to monitor future campaigns. Transport for London’s (TfL) ad space is “the most valuable in the world,” according to the city, and the public, unavoidable nature of the 12,000 images that run on buses, underground and street-level mean they merit special attention, said Graeme Craig from TfL.

“Our customers cannot simply switch off or turn a page if an advertisement offends or upsets them and we have a duty to ensure the copy we carry reflects that unique environment,” said Craig.

Hopefully this common-sense policy will be imported to Canadian cities soon. Besides, there’s only one true way to get a beach body.