These are the faces of workers in Mount Saint Joseph Hospital, who balanced hazardous jobs with anxious and, in some cases, lonely lives away from the hospital. 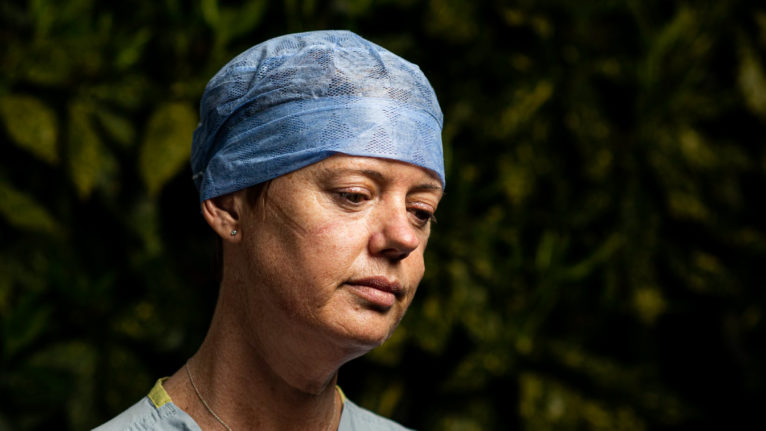 By April, a quiet had fallen over Mount Saint Joseph Hospital. Elective surgeries were suspended. The halls weren’t humming with visitors. And the cafeteria was closed—except to staff who sparsely occupied it to take their socially distanced breaks.
For Robynne Peters, an operating room nurse at the Vancouver community hospital, Mondays, Fridays, and every day in between were bleeding into one another. “I couldn’t tell you the date, most days,” she says from behind a mask. “It’s only on Saturday that you feel kind of normal again.”

That was just over a month after the World Health Organization declared COVID-19 a pandemic and British Columbia, along with the rest of Canada, was still expecting the worst. Since then, the province has had success in controlling the outbreak within its borders. It’s an accomplishment health-care workers, trained to meet the threat on the front line, continue to fight for.

As with many of her colleagues, the donning and doffing of personal protective equipment punctuate Peter’s days. She wears the gear for several hours at a time to shield her from the novel coronavirus, a potentially deadly and terribly infectious pathogen that scientists the world over still struggle to understand.

But the safety measure has a tendency to leave its own mark. “It’s like a suction cup on your face,” she says while unfastening the mask. “When you take it off, it’s kind of embedded in your skin, and you can actually feel it pop off of you.”

For others, such as Scott MacKeigan, the workdays leave their mark on the inside, where anxiety can linger long after a shift ends.

He also works at St. Paul’s Hospital, a downtown referral site that, like Mount Saint Joseph, is operated by Providence Health Care. There, in the intensive care unit, MacKeigan has seen critically ill patients who have been intubated and ventilated in the battle against the disease.

“Some days you’ll go home and think ‘I did something right today,'” he says. “That’s a good thing. But other days,” he adds quietly, choking back tears, “you’ll go home and say, ‘Something got missed.’ That’s the hardest part.”

Charged with watching over the welfare of their patients, many of the health-care workers at Mount Saint Joseph speak of nursing not as a career, but as a calling.

Tina James has been a cook, a prison guard and a member of the Armed Forces. But for the last three years, she has served as a licensed practical nurse at Mount Saint Joseph Hospital. It’s the one career, she says, that she got to choose for herself.

Floating between the hospital’s surgical, acute-medicine and COVID units, James says that these days, more than ever, nursing is about more than just medicine. It’s the impression she leaves on her patients’ lives when close contact with friends and family is generally discouraged.

“It’s heart, it’s understanding, it’s reassurance, it’s—oh my gosh—it’s washing hair and providing everything,” she explains. “You’re everything to your patients right now.”

But it’s also hard, she says. At the end of the day, many of the nurses have families waiting for them at home, some of whom can’t afford to be infected. Hanging heavy over their heads is the risk they pose, as potential vectors for the virus, to loved ones.

As a precaution, MacKeigan says, both he and his wife have a basement suite that they’ve chosen not to rent out while the public health crisis looms large. That’s where he will quarantine himself if he ever faces a particularly risky shift. They’ve both had kidney transplants, he explains, which leaves them immunocompromised and vulnerable to the disease.

Despite taking all the necessary precautions, some at the hospital have still been touched, one way or another, by a virus that doesn’t respect pre-existing conditions—or borders.

Peters adds that her mother, in South Africa, was diagnosed with COVID-19 in early April, and died from complications connected to the disease later that month.

Even if they were in the same city, safety protocols likely would have prevented a final visit. Beneath all the protective gear, Peters carries the weight of that loss too. “I’m living with that as well as doing this,” she says.

All photographs by Jimmy Jeong 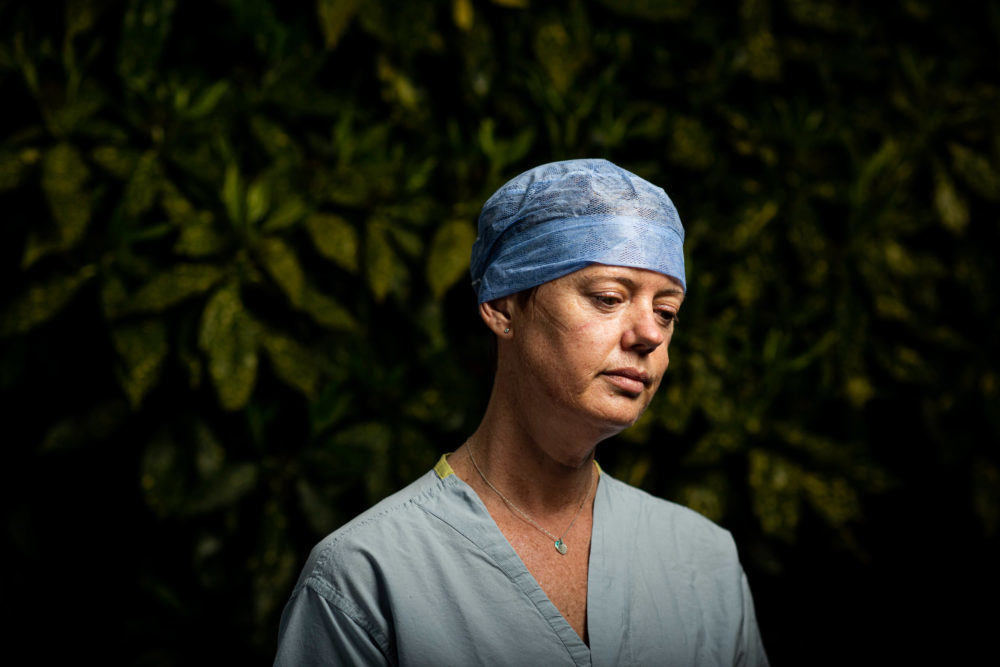 “Everybody is being way more cautious. PPE is being worn all the time. Our surgeries are taking longer because we’re protecting our patients and protecting ourselves, which means we’re doing fewer surgeries during the day.”
—Robynne Peters, 46, registered nurse, operating room