Is this Sports Illustrated swimsuit cover a victory for women?

Plus-size model Ashley Graham on the swimsuit issue cover: an important moment for body acceptance or just another hot woman in a bikini?

“Beauty is not categorically one thing, it should be celebrated in all of its shapes, sizes and colours,” said MJ Day, editor of Sports Illustrated‘s swimsuit issue in an SI podcast. That’s one of the reasons the magazine included Ashley Graham, a size 16 model, as one of three cover girls of the latest swimsuit edition. Graham’s cover is being celebrated as a watershed moment for body positivity in a culture that has preferred waif-like figures for the last half-century. But is it really? Two of our editors discuss. 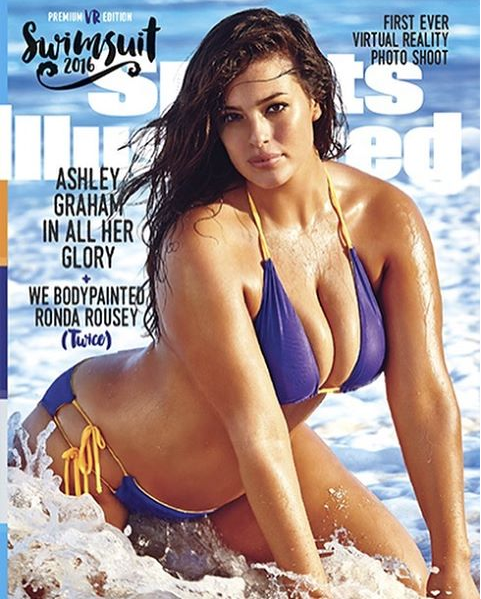 Sadiya’s take: Not so good.

Sports Illustrated editor MJ Day says the magazine went with three covers for the first time to celebrate three very different visions of beauty. But the cynic in me thinks the reason behind multiple covers is risk management — a way to include more traditional pick Hailey Clauson. Sure, SI called upon an actual athlete, UFC’s Ronda Rousey, for the third cover; then again, she’s not exactly a troll. Rousey’s body is so toned that SI didn’t even bother putting clothes on her — just body paint.

Graham is a knock-out — bigger than the average model we’re used to seeing on an SI cover, or if I’m being real, any cover — but she’s not exactly real. She’s absolutely gorgeous and her body is flawless. I recognize the cover is not only good news for Graham’s career but for an industry that Photoshops size four models, but there’s one thing missing from the conversation: Since when is a nearly naked woman (of any size) styled for the male gaze considered progress?

It seems representations of women are so incredibly distorted that we YAS QUEEN everything and anything different from the norm. I respect women, like Day, who have stuck their necks out to make these shifts, but let’s not lose perspective on how small these developments are.

“This cover is for every woman who felt like she wasn’t beautiful enough because of her size. You can do and achieve anything you put your mind to,” Graham posted on Instagram with the photo. I just think we should aspire to be more than naked displays for men.

Raise your hand if you have ever read a magazine. (Ed note: That better be all of you and it had better be this one.) Now raise your hand if you have ever felt insecure after reading a magazine. Men, women, non-Gerber babies — everyone is vulnerable to the “I’m not enough” self-hatred that is kicked up by weeklies and monthlies. In fact, some of the worst offenders tend to be women’s publications. So, you know, yikes.

Magazines are imperfect jumping-off points from which to address our widespread cultural sicknesses — like our nasty habit of shaming women for their inherited physicality, for example. But you know what? Those same male gaze–obsessed glossies are among the most compelling, most-visible tools we currently have at our disposal. We didn’t wake up this morning in a world free of waist trainers and #KylieJennerLipChallenges and cocaine-disguised-as–diet pills. Women’s Health resolved to ban the phrases “bikini body” and “drop two sizes” from its covers less than two months ago. A swimsuit company just decided that women over the age of 50 are sexual beings worth a passing glance. It is 2016, and we are wide-eyed newcomers to this whole one-size-doesn’t-fit-all thing. It sucks, but it’s the truth.

To steal from Batman — because, sure — Ashley Graham is the hero we deserve, if not the one we need. Readers will not find a plus-size, fully clothed female rocket scientist fronting the cover of Sports Illustrated’s swimsuit edition anytime soon. (That is an assignment for Scientific American.) But, according to SI editor MJ Day (a lady), “Graham is a sultry feminine masterpiece” whose “confidence is contagious.” Yes, please, give us more of that.

Graham is not a saviour in a string bikini, but she is an un-retouched size 16 on the cover of a massively circulated men’s magazine. Still, it’s not the men I’m most concerned about. In Graham’s own words, SI took a “risk” in putting her, an endomorph, front and centre. “[But] right now,” she says, “ what [Sports Illustrated is] doing is they are setting the standard for what everybody else — magazines, designers, people in Hollywood, should be doing.”

In the not-sexist utopia that is our future, young, impressionable girls won’t have to flip past bare-breasted, mouths-open models when rifling their way to Bop Magazine on a shelf in Shopper’s Drug Mart. But, for now, by all means, give them big boobs, give them love handles, give them more.

Related:
Of course Serena Williams is Sportsperson of the Year
Why you might actually want the latest Pirelli calendar
Every woman has a real body, even Victoria’s Secret models