Why Reproductive Rights Are On The Line In The U.S. In 2020

A U.S. Supreme Court case could spell the beginning of the end of Roe v. Wade. 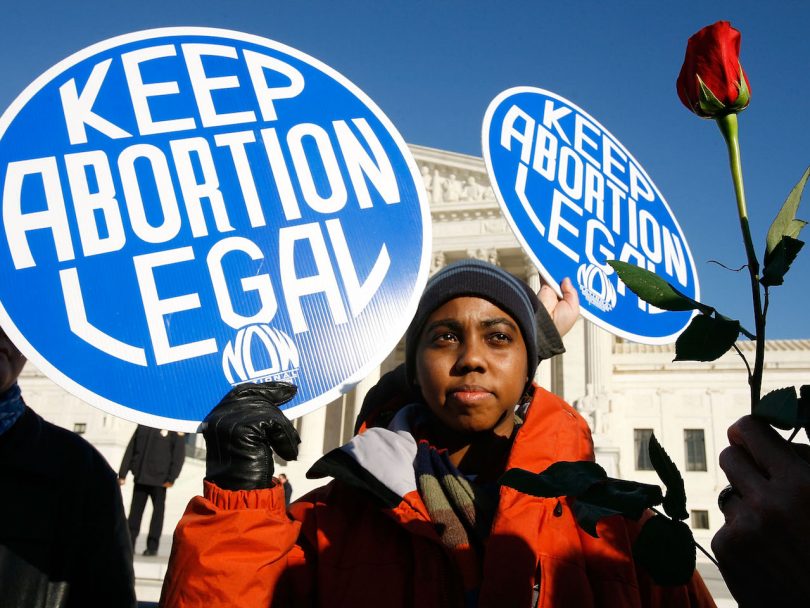 It’s going to be a critical year for abortion rights in America: States are poised for another year of extreme abortion bans. The presidential election could cement the political power of the anti-abortion movement for four more years. And above all else, a U.S. Supreme Court case could spell the beginning of the end of Roe v. Wade. Here’s what’s at stake.

In March, the U.S. Supreme Court will hear a case that threatens the future of abortion rights in America. The case—June Medical Services v. Gee—centres on a Louisiana law that’s nearly identical to a Texas law already struck down by the Supreme Court in 2016.

If the court upholds the law, two or all three of Lousiana’s last abortion clinics could close. Louisiana could become the first state without an abortion clinic since the aftermath of Roe v. Wade, the decades-old Supreme Court decision legalizing abortion.

The law at issue requires abortion doctors to have admitting privileges at a nearby hospital—a requirement that many of Louisiana’s abortion doctors said they could not meet for a variety of reasons, including anti-abortion bias in hospitals, and one that medical groups including the American Medical Association deem unnecessary. In the 2016 Whole Woman’s Health v. Hellersted decision, the Supreme Court ruled that admitting privileges do far more to restrict abortion access by shutting down clinics, compared to the very minimal, if any, medical benefit they provide.

Roe v. Wade has been the law since 1973, when the Supreme Court ruled 7-2 that access to abortion is a right protected by the Constitution. Since then, anti-abortion groups have been gunning to overturn the decision, in part by trying to fill the Supreme Court with conservative, anti-abortion judges. Decades of expansive state anti-abortion laws have followed. Some were struck down. Many were upheld. Six states now have a single abortion clinic.

But this marks perhaps the most critical abortion case of our lifetime, because it is about far more than Louisiana’s clinics. It’s about the fate of a series of subsequent Supreme Court rulings that have upheld abortion as a Constitutional right.

The future of abortion precedents are on the line

The Supreme Court is governed in part by the respect for precedent: the idea that regardless of who makes up the nine justices in black robes on the bench, those justices should rule with respect for the decisions that came before them.

In abortion law, a series of cases after Roe v. Wade have all upheld abortion rights. But that could change with this case.


The Court could uphold Louisiana’s law, and if it does, it will be a serious victory for the anti-abortion movement. Many will view that as a direct affront to the Court’s own decision only four years ago, in the Texas case. It will almost certainly be seen as an attack on abortion precedents writ large, and as a signal that this Court is keen to unwind abortion rights.

Such a ruling would also likely open the floodgates for similar (or identical) anti-abortion laws that states’ claim protect women’s health. The Court is also considering whether abortion clinics can even sue over anti-abortion laws at all—a question that could devastate abortion-rights lawsuits.

But the Court could also uphold Louisiana’s law and directly overturn previous abortion decisions, including Whole Woman’s Health. It could even overturn Roe v. Wade.

If that happens, one estimate finds that roughly half of U.S. states are likely to ban abortion.

Overturning Roe v. Wade is considered the nuclear option—unlikely in the eyes of many Court watchers. But it’s enough of a possibility that 207 U.S. members of Congress took the unprecedented step of writing a letter to the Court this year urging it to do exactly that.

They owe this emboldened moment largely to Donald Trump—who made history this month as the first sitting president to speak at the March for Life, the anti-abortion movement’s largest annual event.

The Supreme Court has a new conservative majority thanks to Trump

If it weren’t for Trump’s appointments to the bench, we likely wouldn’t be facing this Supreme Court case. Through them, Trump has solidified a majority of conservative justices on the Court who are considered hostile to abortion rights.

First, he appointed Neil Gorsuch. Then—as you likely recall—he appointed Brett Kavanaugh, the judge accused of sexual assault. Kavanaugh replaced a justice named Anthony Kennedy, a conservative who had nonetheless been a key vote in upholding abortion rights in the past.

The Court now has five reliably conservative and four liberal justices. As a result, Chief Justice John Roberts is widely seen as the new “swing” vote, a man who believes (as do most conservative legal minds) that Roe v. Wade was wrongly decided, but who could be swayed by arguments that the precedent must be protected.

It was clear at the time that Kavanaugh’s appointment could be devastating for abortion rights. And the Louisiana case will be the first abortion lawsuit argued before this new Court—the first chance to see if Trump kept his promise to appoint judges who will overturn Roe v. Wade.

The presidential election could seal the fate of abortion rights

That’s what makes the 2020 presidential election in November so critical for pro-choice and anti-abortion activists alike—among all the other issues riding on this campaign.

If Trump is re-elected, he may have the chance to appoint a third justice to the Supreme Court—making it even more likely that Roe v. Wade will be overturned. And he’ll be able to continue to fill the lower federal courts with anti-abortion judges.

His administration will also be able to continue to advance other anti-reproductive-rights work, including stripping domestic and international pro-choice groups of federal funding for reproductive health and reducing access to birth control health coverage.

Here’s another reason we know abortion is going to be a driving issue in the presidential and down-ballot elections: Some of the biggest pro-choice and anti-abortion groups are pumping unprecedented funding into 2020 races. Planned Parenthood is spending $45-million. Meanwhile, the anti-abortion Susan B. Anthony List is spending $52 million.

In 2020, Republicans are going to keep gunning for Roe v. Wade—and Democrats are fighting back

U.S. statehouses are gearing up for another year of intensified battles over pro-choice and anti-abortion laws.

Last year marked an unprecedented wave of extreme abortion bans across Republican-controlled states. Alabama banned nearly all abortions, and five other states passed six-week “heartbeat” bans, outlawing abortion after the pulsing of cells that later form the heart can be detected—which can occur before a woman even knows she’s pregnant. None of these laws have taken effect—and they are designed to make their way up to the Supreme Court to overturn Roe v. Wade. This year, more bans and anti-abortion bills are already in the works in states including Kansas, Nebraska and South Carolina. Overall, the pro-choice Guttmacher Institute considers 22 states to be hostile or very hostile to reproductive rights, and seven states to “lean” hostile.”

But a slew of Democratic-controlled states also passed a range of reproductive rights legislation last year, and more are planned.

By one count, progressives passed more reproductive rights laws last year than in the entire previous decade. And Democrats are also pushing to ratify the Equal Rights Amendment, another decades-old battle that could have a big impact on abortion rights— though its future is legally murky because the deadline to ratify the ERA expired in 1982.

States, more than the federal government, have been the battlegrounds for abortion rights for decades. Though abortion has been a Constitutional right for 47 years, states have still had the ability to regulate it. Previous major Supreme Court decisions—especially the 1992 ruling Planned Parenthood v. Casey—have given state lawmakers the ability to pass laws that politicians argue advance women’s health or seek to encourage people to keep their pregnancies.

These laws—and the long-time ban on federal health care coverage of abortion—disproportionately impact the ability of poor women and women of colour to obtain abortions, so much so that some reproductive rights groups refuse to “celebrate” Roe v. Wade.

Cumulatively, these laws have diminished abortion access to such an extent that 90 percent of U.S. counties don’t have an abortion clinic, and about 275 clinics have closed since 2013.

That’s why, even if the Supreme Court sides with Louisiana’s abortion clinics, the right to abortion won’t be seen to be solidified—so much as hanging on.