In his first days as U.S. president, Trump's executive orders, on everything from abortion access abroad to the Mexican border wall, came fast and furious.

To call it a surreal week in U.S. politics would be a bit of an understatement: What began with a (depending on who you ask) sparsely populated inauguration ceremony was followed by an estimated 1.2 million people flooding D.C. to protest the new president. Donald Trump quickly set to work carrying out some of his more astonishing (and, for many, alarming) election campaign promises. There have been enough stories and counter-stories flying around this week to make heads spin. To help you wade through it all, here’s an overview of six dramatic ways in which Trump’s actions in his first week could greatly impact America, Canada and the world.

1. He’s shut down abortion access for women in the developing world
One of the first executive orders Trump signed reinstates the “gag order,” which bans any non-governmental organizations or development agencies who get funding from the U.S. government from providing abortion services abroad (or even sharing any information about abortion). It wasn’t a surprise: Every new administration since 1984 has either reinstated the order, known officially as the Mexico City Policy, or revoked it within the first few days of assuming office.
How this affects Canada and the world:
America is the biggest donor to global healthcare, and unsafe abortions not provided by a trained professional kill tens of thousands of women a year. Planned Parenthood International said it won’t abide by the gag order and could lose up to $100 million in U.S. funding (even though it doesn’t use that funding for abortions), The Guardian reports. Here in Canada, Minister of International Development Marie-Claude Bibeau defended the Trudeau government’s commitment to funding abortion services in the developing world, reinstated by the Prime Minister when he won office. Meanwhile, Canadian anti-abortion groups like Campaign Life Coalition are invigorated by Trump’s decision on Monday. 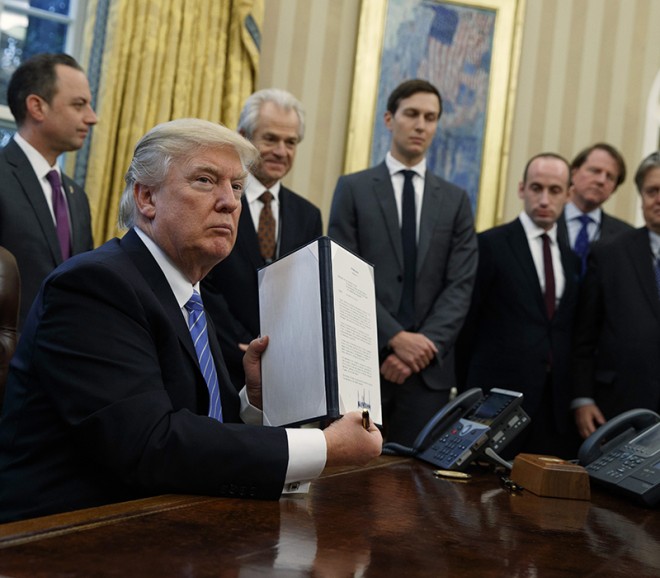 2. He’s trying to build that wall
The construction of a border wall between the U.S. and Mexico was one of Trump’s most bombastic campaign pledges — and one of the biggest promises skeptics were sure he wouldn’t keep. But on Wednesday, Trump signed an executive order green lighting the project.
How this affects Canada and the world:
A wall would obviously have a huge social and economic impact. It’s already increased tensions between the two countries (Mexican President Enrique Peña Nieto on Thursday cancelled a meeting with Trump scheduled for next week). Trump is still trying to figure out a way to get Mexico to foot the bill for the wall, estimated to cost between US$12 and US$15 billion (other estimates put it as high as US$20 to US$40 billion), or for Congress to find the cash. (On Thursday, Trump’s secretary Sean Spicer said a 20 percent tax on Mexican imports is one pay-back option being looked at by the government). The wall fits into Trump’s larger strategy to crack down on undocumented immigrants, fueling xenophobia. Clearly, it will impact families on both sides of the border, and the wall throws into question Mexico’s future place in the North American Free Trade Agreement Trump promised to rip up during his campaign. (Just as it did the day after the election, Mexico’s peso weakened when Trump signed the executive order). The wall order may also be a sign for Canada to be vigilant despite Trump saying he isn’t interested in putting up a wall between Canada and the U.S.

What Donald Trump’s presidency means to me

3. He will order Syrian refugees and other immigrants banned from America
It was one of the more xenophobic promises from Trump’s election campaign: Ban refugees and immigrants from Middle-Eastern countries and what Trump says are “terror-prone” nations, and find and deport illegal immigrants. President Trump signed on Wednesday an executive order giving new life to programs that would let federal governments work with state actors to arrest and detain undocumented immigrants with criminal records, then deport them. Another executive order, which the New York Times reports will be signed imminently, would block Syrian refugees from the U.S. indefinitely and all others from arriving for at least 120 days. The plan would also suspend immigration from Muslim-majority countries such as Iran, Iraq, Libya, Somalia, Sudan, Syria and Yemen for at least 30 days to give the government a chance to institute what Trump has referred to as “extreme vetting” of visa applications.
How this affects Canada and the world:
Internationally, Trump’s plan will make an already very difficult situation worse for some of the world’s most at-risk people: refugees. In Canada, which has brought in nearly 40,000 Syrian refugees since the fall of 2015, this ban should only see demands on our country rise. Trump’s amped-up screening procedures for people from predominantly Muslim countries will also likely fuel the rhetoric of Conservative leadership candidates such as Kellie Leitch — she’s been campaigning on a promise to screen newcomers for “Canadian values.” 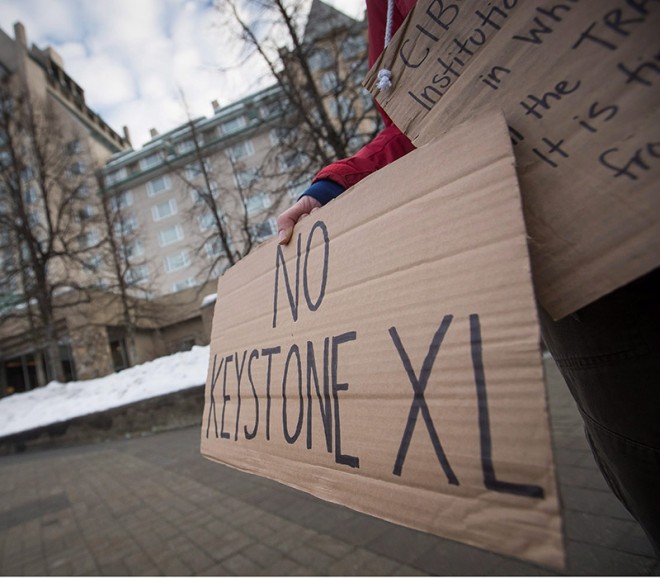 4. He issued a green light for the controversial Keystone XL pipeline
On Tuesday, Trump approved plans to build the Keystone XL pipeline from the Alberta oilsands to Nebraska. Environmental activists have tried to block the pipeline, saying the easy transport of fuel will contribute to climate change and damage the lands of indigenous people. In 2015, Barack Obama rejected the pipeline, and its future has been in limbo ever since. After signing that executive order, Trump said he will want to “renegotiate some of the terms” to make sure Americans get lots of construction jobs from the project.
How this affects Canada and the world:
This is a huge win for the oil and gas industry, and earned cheers from Prime Minister Justin Trudeau and Rachel Notley. They see it as crucial to economic recovery in Alberta, which has bled jobs thanks to the steep drop in oil prices. The Keystone news also made the Canadian dollar surge in the markets Tuesday. But prepare for protests: Environmental and indigenous rights activists will not take this silently. On Wednesday, environmental activist group Greenpeace unfurled a banner on a construction crane positioned behind the White House. Its message: “Resist.” 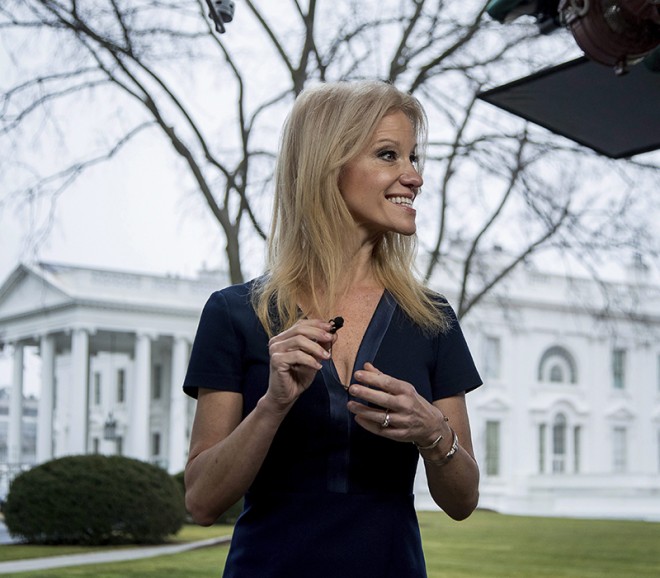 5. “Alternative facts” are now official White House facts — and science is suffering
Trump’s counselor Kellyanne Conway used the phrase (an offshoot of the well-worn “fake news” allegations) while defending the administration’s inflated attendance numbers for the inauguration. But the term quickly become shorthand for lies and spin from the U.S. government designed to promote its agenda. Most affected, so far, are scientists: The Environmental Protection Agency and the United States Department of Agriculture Monday halted the release of all “outward facing” press releases. “We’re taking a look at everything on a case-by-case basis, including the web page and whether climate stuff will be taken down,” a communications director for the EPA’s transition team told the Associated Press on Wednesday. The official National Parks Service Twitter account was temporarily banned from tweeting after questioning Trump’s inauguration turnout. Meantime, at least one National Parks Service Twitter feed “went rogue,” sharing climate facts.
How this affects Canada and the world:
Any attempts to limit what scientists say doesn’t bode well for already-precarious efforts to combat climate change. Plus, the “alternative facts” are leaving everyone pretty confused.

6. He’s already killing trade deals involving Canada
Making good on yet another campaign pledge, Trump has yanked U.S. involvement in the Trans-Pacific Partnership free trade deal, which was meant to limit tariffs on goods sold between 11 countries (Canada is one). “We are going to stop the ridiculous trade deals that have taken everybody out of our country and taking companies out of our country,” Trump said after signing the executive order on Monday. He also plans to renegotiate the NAFTA deal between Canada, the U.S. and Mexico “at the appropriate time” (since it’s a U.S. law, it’ll be harder to kill than the TPP, which was never ratified.)
How this affects Canada and the world:
It puts Canada’s trade relationship with the U.S. (worth US$663 billion a year) at stake, the Globe and Mail reports. But his pledge to renegotiate NAFTA gives Canada hope that strong trade ties can be maintained. “[Trump’s people] actually have emphasized to us that the trade relationship with Canada is a good one, is a balanced one, is one that they value and one that they understand is good for not just the northern states but many states across the United States,” Trudeau said at a news conference in Saskatoon this week. Still, Canada is actively exploring its options, and is already in trade talks with a number of Asian countries now that the TPP is dead.

More:
Chatelaine’s complete coverage of the Women’s March on Washington
Farewell to Mary Tyler Moore, one of TV’s first feminists
Plus-size model Elly Mayday: If I hadn’t trusted my instincts, I’d be dead