There’s always a certain amount of virtue signalling that goes on when Hollywood liberals come together, but at Sundance this year it felt serious. 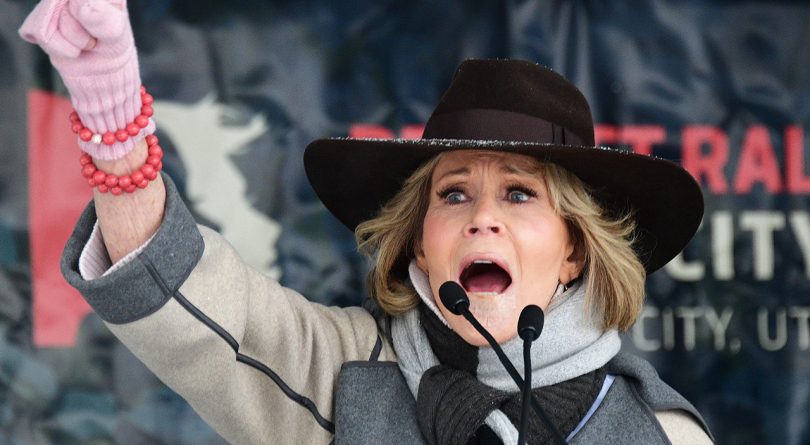 They’re calling it the Sundance Festival’s “Year of Women.” On the streets of Park City, Utah, this past week, you would have been just as likely to bump into Supreme Court Justice Ruth Bader Ginsburg or feminist lawyer Gloria Allred (both in town for events — in Allred’s case a documentary about her life) as the typical barrage of L.A. industry types in false eyelashes and fur boots.

One person no one was bumping into (but everyone was talking about) was Harvey Weinstein. The producer, long-feted as the emperor of quality independent American filmmaking, used to preside over this town as his own personal ice kingdom — and indeed in many ways it was. Dozens of his movies have premiered here since the festival’s inception in 1978, and his company’s annual football-viewing party on the first Sunday was, until this year, the hottest ticket in town.

In Weinstein’s absence, the American independent film world, which gathers at this mountaintop town once a year to celebrate itself, is having a sober moment of self-reflection. There’s always a certain amount of virtue signalling that goes on when Hollywood liberals come together, but at Sundance this year it felt serious. The snowball effect of the #MeToo and #TimesUp movements, combined with allegations against many of the festival’s biggest past players (including but not limited to James Franco, Paul Haggis, Dustin Hoffman, Louis CK, Kevin Spacey, Ben and Casey Affleck), has resulted in a palpable chill over Park City – and it’s not just the mountain blizzards. The nights of drunken hot-tub jumping are over, replaced by a sprawling schedule of progressive, issue-oriented panels, events and films.

This was a festival rebranding itself for the new world order.

Sundance organizers are wise to take this shift seriously — after all, the festival played host to some of the alleged abuse that has shaken the industry as a whole. Weinstein, for instance, is accused of raping actress Rose McGowan and sexually harassing Louisette Geiss during the festival itself.

During my time in Park City I attended countless movies and interviews, many dinners, lunches and events — but hardly a single party. The one “champagne-and-swag-lounge” I ducked into to escape a snow squall was woefully ill-attended. The DJ spinning beats looked mildly embarrassed to be there, and the hangers-on in fur-trimmed hats scanning the room for celebrities would eventually leave disappointed.

Indeed, many of the major agencies and production companies scaled back their parties in favour of teetotal lunches and brunches, and the festival itself updated its code of conduct earlier this month, stating that it intends to “allow attendees to experience [the festival] free of harassment, discrimination, sexism and threatening or disrespectful behaviour.”

The Respect Rally for women on January 20th (honouring the one-year anniversary of the Women’s March) was attended by hundreds of industry professionals, including a fired-up Jane Fonda, and was followed up the next day with a much smaller First Nations protest, keen to draw attention to the many outstanding American land claim disputes.

In an interview late last year with the Salt Lake Tribune, festival director John Cooper did not pull any punches. “Harvey has been a fixture at Sundance for years. Is he still welcome? He is not. What Sundance has done is try to create a culture of inclusion and creativity together. We do not believe that we participate in or condone a culture that would contribute to crime and harassment. In fact, quite the opposite.”

As they say out here in the wild west, “That thar’s some distancing words.”

Speaking to filmmakers and actors over the past few days, I heard the same sentiment voiced over and over again: Let’s hope this moment of reckoning leads to lasting change.

Claire McCarthy, director of Ophelia, a feminist retelling of Hamlet from his much-beleaguered wife’s point of view, said in an interview, “It feels like a great time to be a woman director, but it certainly wasn’t always that way. And it would be nice to get the point where gender really isn’t important or even part of the discussion.”

At this year’s festival, the issue of gender and diversity often seemed to be dominating the discussion entirely. From the Horizon award (hosted by William Morris Endeavour) for up-and-coming female filmmakers to the many panels on the subject of gender diversity and inclusion in film and television hosted by high-profile sponsors like Teen Vogue and Geena Davis’s Bentonville Film Foundation, Sundance was awash in discussions of sexism, inequality and how best to shift the status quo.

I’m Pro-Choice, And Even I’m Uncomfortable With Trudeau’s Hard Line On The Issue

At the Teen Vogue panel, talk of sex positive feminism was in the air. Comedian, actress and social media star Amanda Cerny said she’s sick of women being told they can’t be funny and sexy at the same time. “I was a Playmate when I was at college and I spent years trying to live that down when I moved to L.A.,” she said. “I’d like to live in a world where a woman being confident about her body didn’t give internet haters permission to call her a slut.”

And the following day, on the “Women Breaking Barriers” panel hosted by Sundance TV, producer and president of Women In Film Cathy Schulman offered a long view of the struggle for gender equality in Hollywood. “Seven years ago, I would call the trades and beg them to cover our issues and I couldn’t get a single article published,” said Schulman. “Now there isn’t a minute, a day, week or month that goes by that we don’t talk about women’s issues. The most important thing is that we don’t get all excited and then just brush everything under the rug again.”

Canadian actress Sandra Oh, who was also on the panel, offered a hopeful view of the future. “There is a new generation of women who have less heaviness on them and I’m sure there are lot of women in this room who have a clear creative vision and will put it out there, and they inspire me tremendously,” she said.

But for all the political chat, many industry professionals insist that Sundance will continue to do what it does best: facilitate the business of film. As Sony Pictures Classics co-founder Tom Bernard told the Hollywood Reporter, “The deal-making will be the same. Harvey Weinstein was never a factor in Sundance. And Sundance was bigger than his behaviour. He stood out like a sore thumb. Sundance does not accept those kind of people.”

Or at least not anymore, anyway.