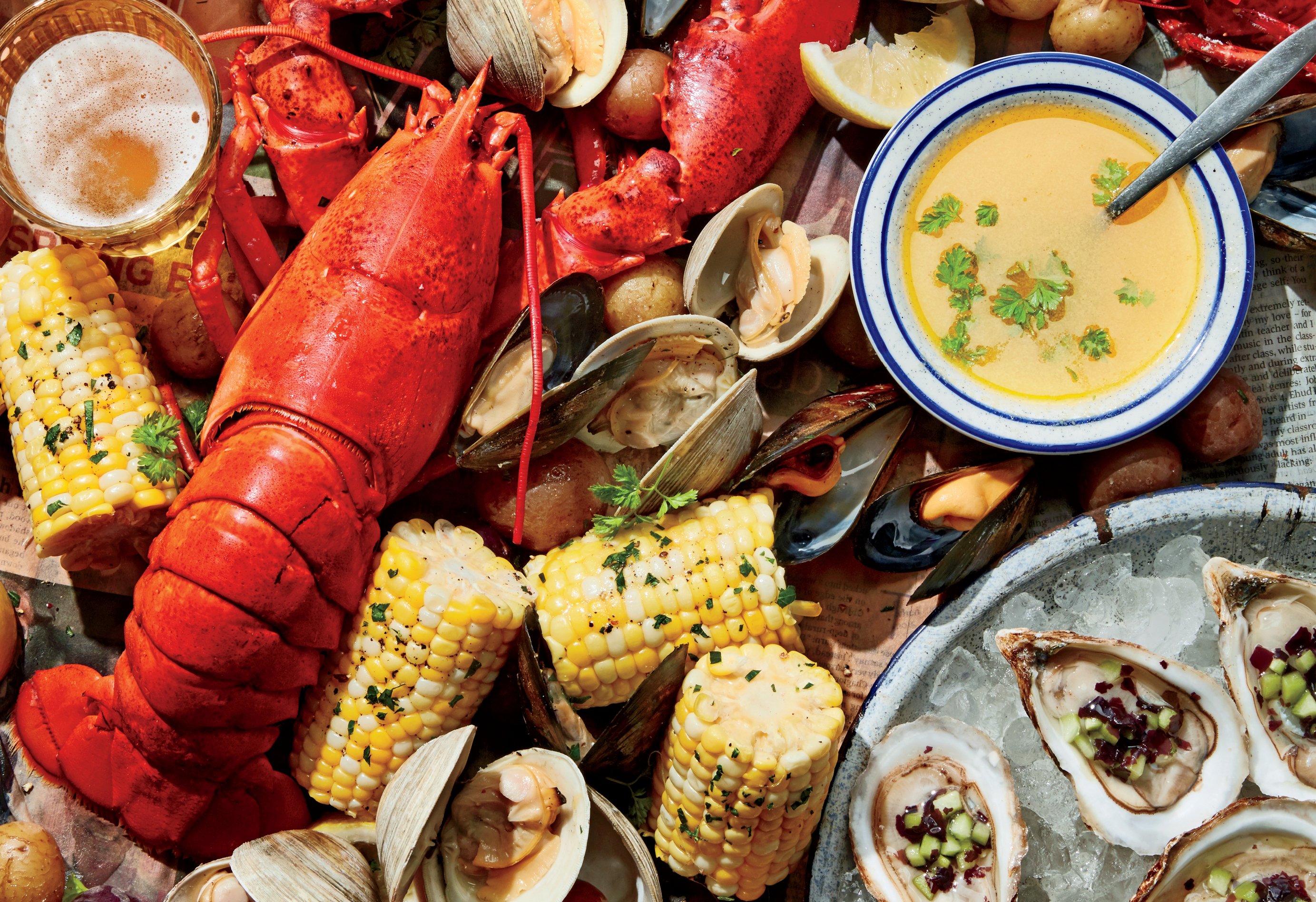 How To Throw An East Coast Seafood Boil

Complete with mouth-watering recipes, cooking tips, shucking how-tos and advice for sustainable sourcing, our comprehensive boil guide is sure to become a summer staple.

Plus, how to sustainably source your seafood.

1 day before
Make raspberry cordial and dulse mignonette. Clarify the butter. Refrigerate all. 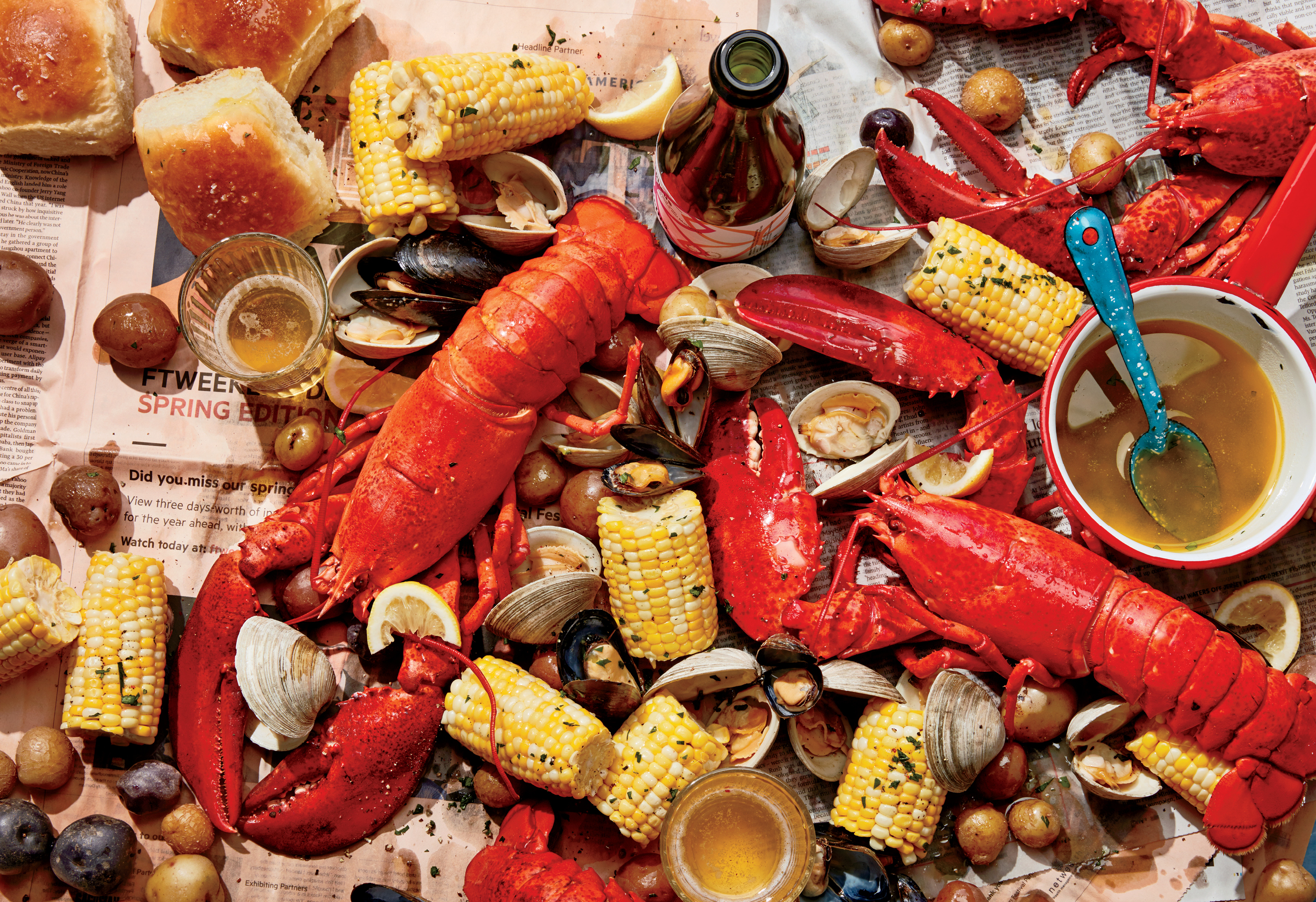 The East Coast’s bounty of seafood and shellfish is often boiled in the salty waters of the Atlantic. If you don’t have access to sea water, add 3/4 tsp sea salt for every 1 cup water—it should taste as salty as the ocean.

Perfectly cooked lobster is one of life’s most delicious pleasures. Here are your keys to lobster success.

Live lobsters should be cooked the same day they’re purchased. Because their flesh begins to deteriorate soon after death, they must be kept alive until they’re cooked. Keep lobsters in the fridge, in the cardboard box you brought them home in. Some experts recommend numbing the lobsters by placing them in the freezer for about 10 minutes before cooking.

If you prefer not to cook live lobsters, some seafood counters will cook them for you. Or substitute eight frozen lobster tails (thaw them in the fridge overnight). Boil in salted water along with clams and mussels until shells turn orange, 6 to 8 minutes.

Use the largest pot you have to cook this boil. If your pot isn’t big enough to fit them all, you may need to cook them in batches. (All lobsters in the pot should be fully submerged in water.) When the shells are bright orange and the antennas pull away easily, they’re cooked.

How to eat lobster

1. Twist the claws and then pull out to remove. 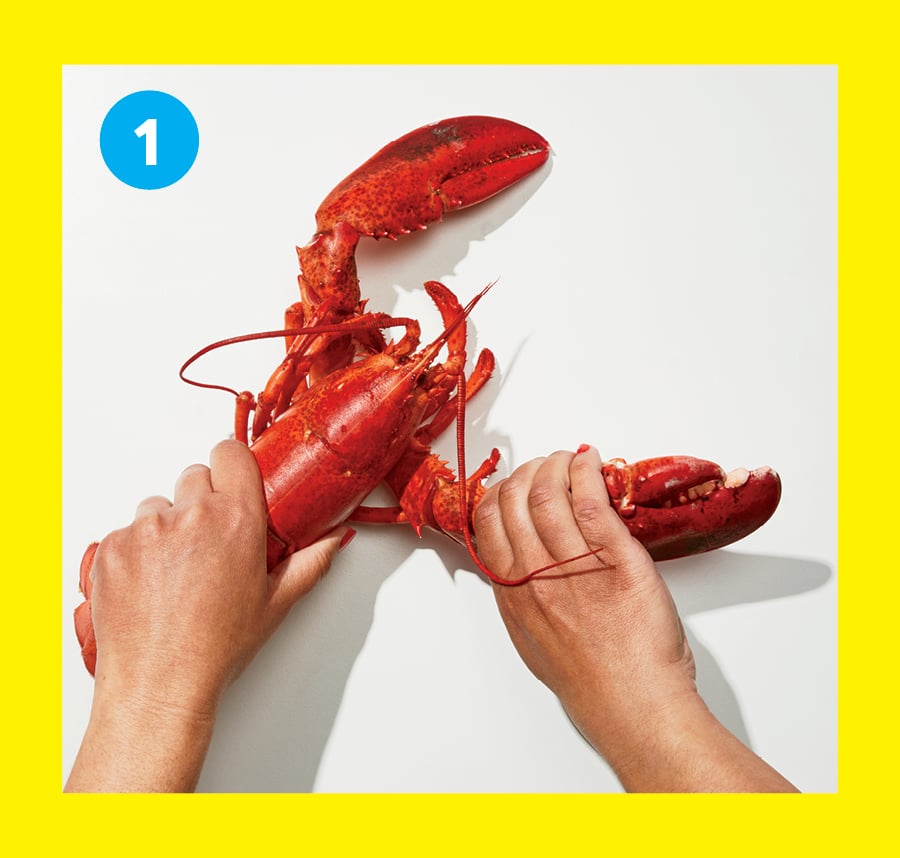 2. Crack each claw with a nutcracker or the dull side of the blade of a chef’s knife. 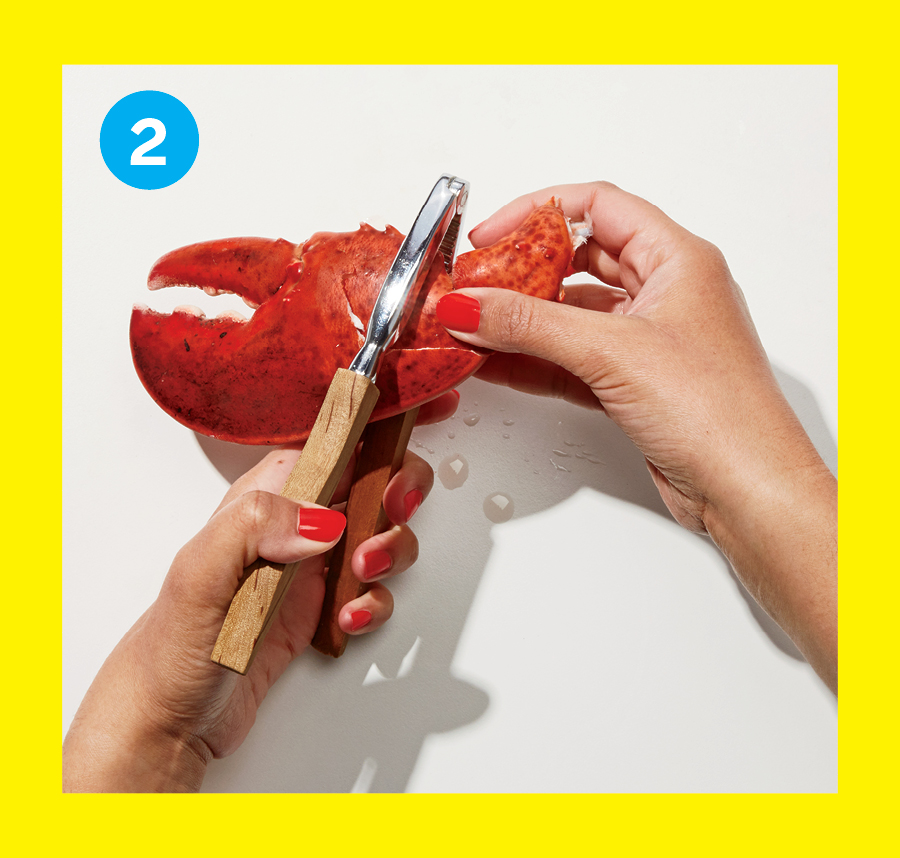 3. Separate the tail from the body by arching the back until it cracks, and then twisting and pulling out the tail.

4. Bend back and break the flippers off the tail.

5. Insert a fork into tail opening and push the meat out the other end.

6. Pull the shell with the head off the body. The body cavity contains the tomalley, or liver, of the lobster, which is edible and turns green when cooked. If you find orange lobster roe (eggs) in here as well, you have a pregnant female. 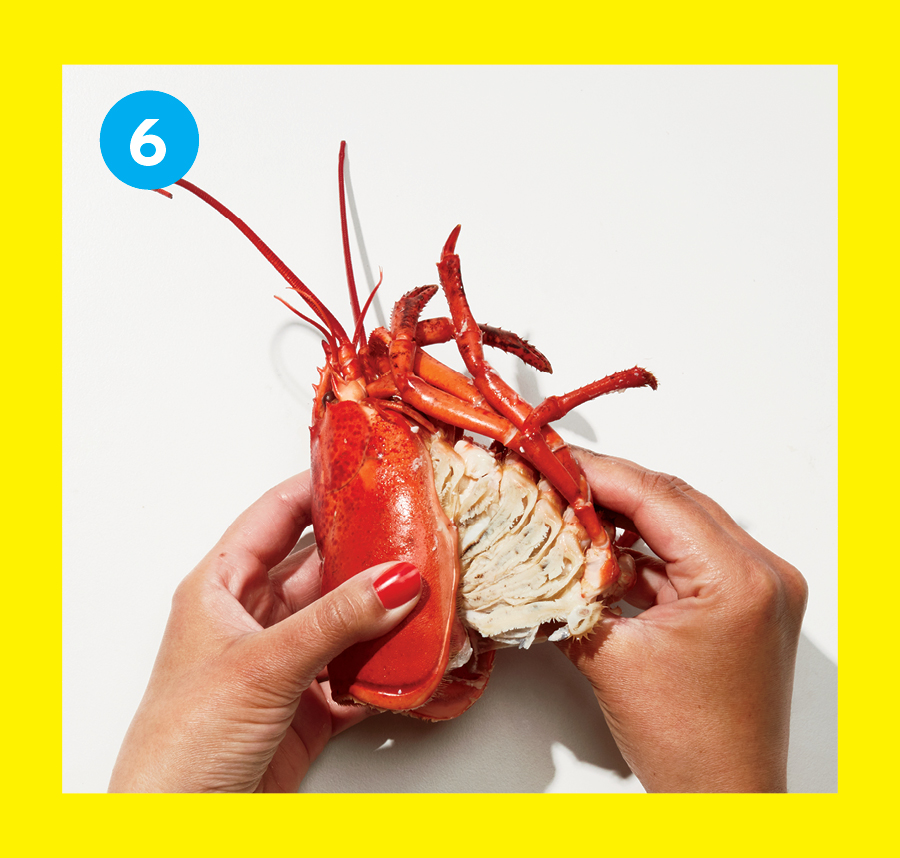 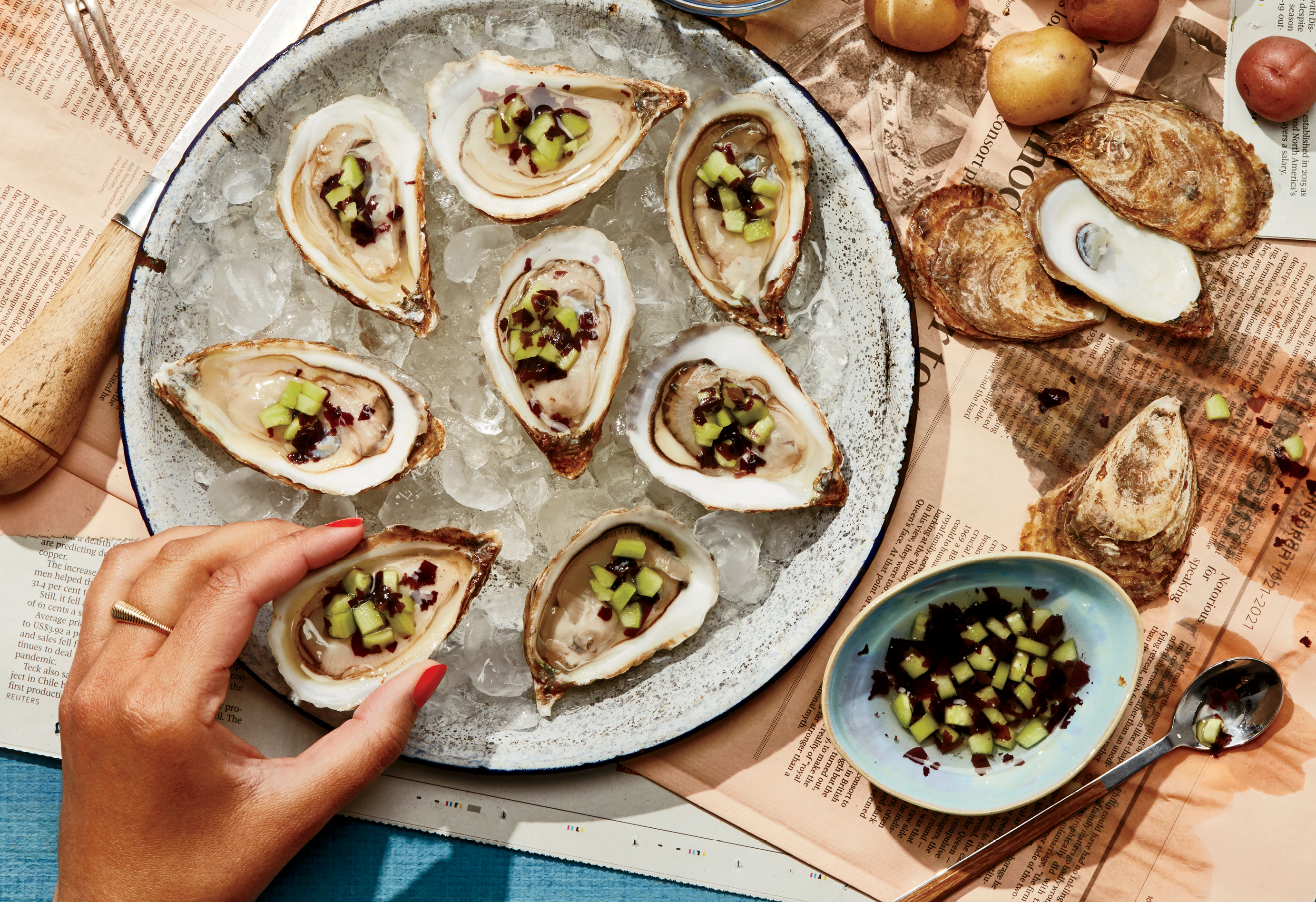 Dulse is a salty and savoury edible seaweed that grows wild in the cold waters off the coasts of New Brunswick and Nova Scotia.

Oysters take on the features of the water they grow in. The presence of algae can affect the look and taste of each variety. Here are some common ones you can find at your local grocery store.

Meaty and sweet, these are P.E.I.’s most famous and affordable oysters.

These slightly smaller oysters are briny and light–a good choice for beginners.

These green, algae-tinged oysters are briny and salty.

1. Set oyster, belly-side down, on a clean tea towel. 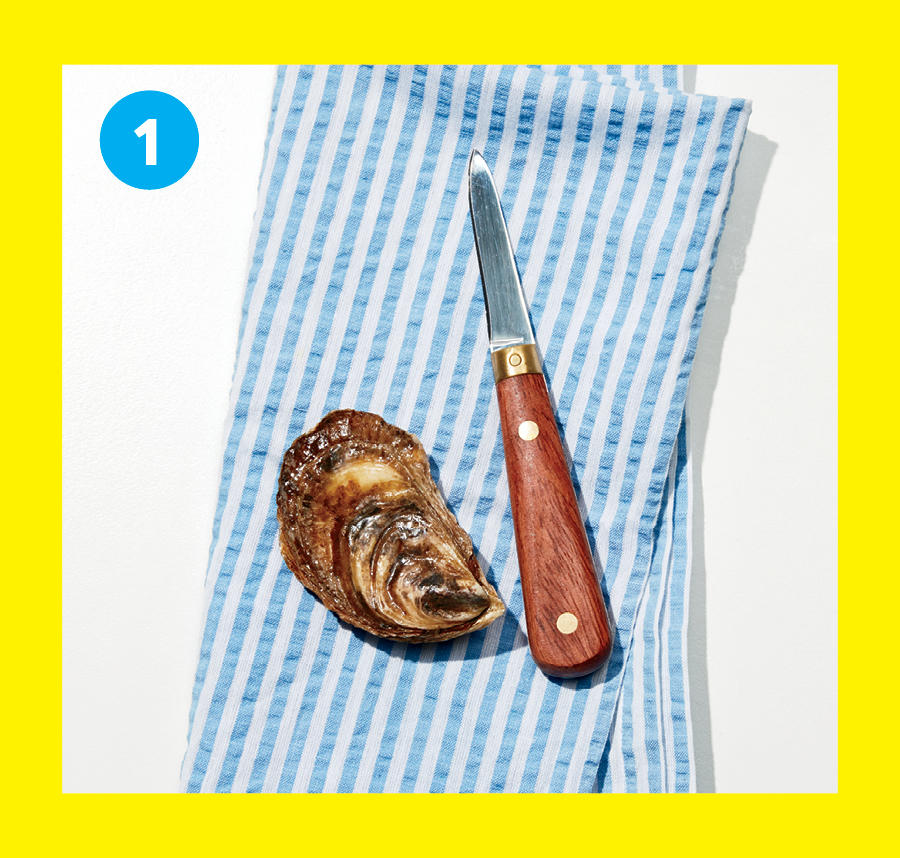 2. Grip large end of oyster with the towel, exposing the hinge on the other end. 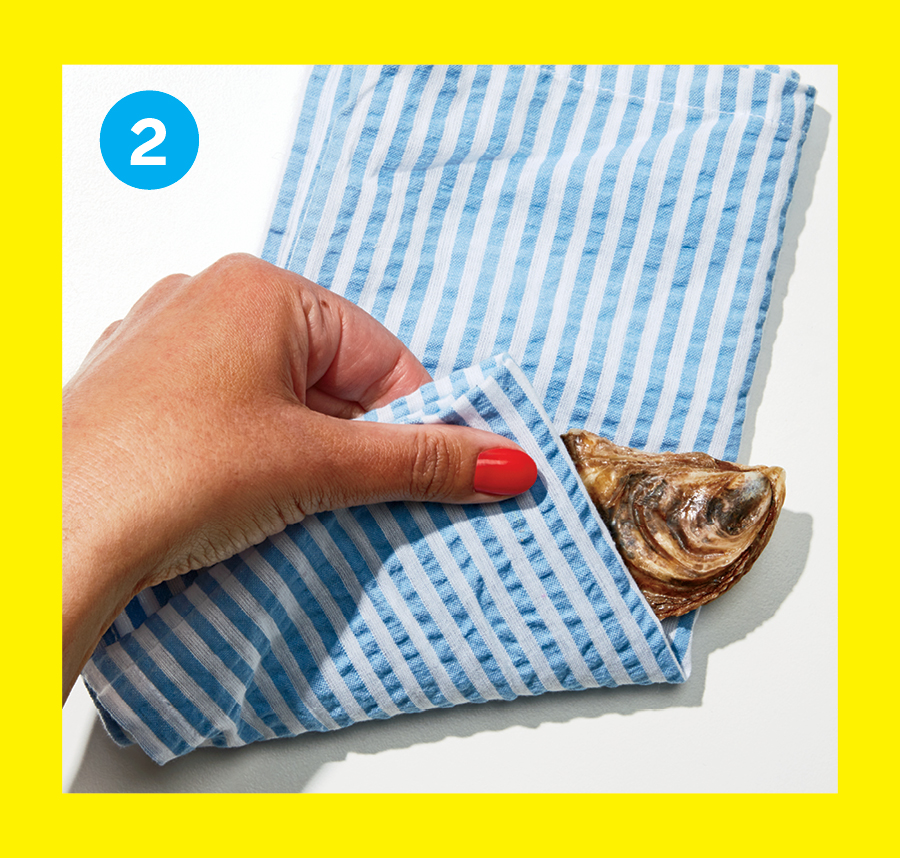 3. Place the tip of an oyster knife in the hinge of the oyster. 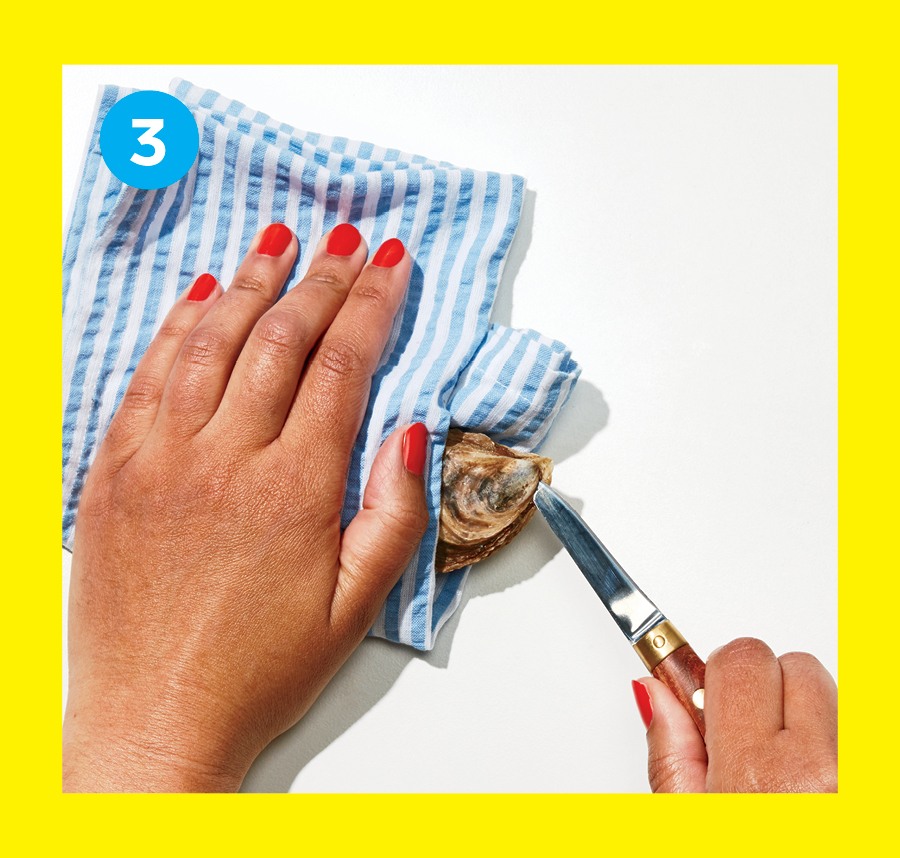 4. Work knife into hinge by wiggling and twisting until you feel oyster “unlock.” Slide blade across shell. 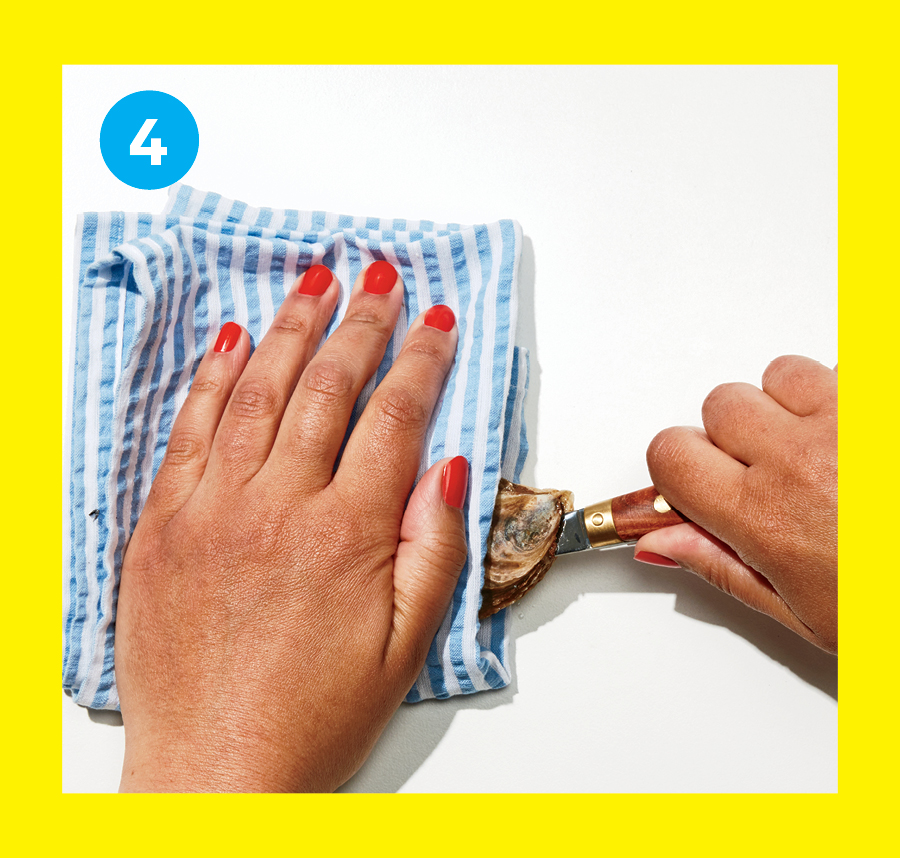 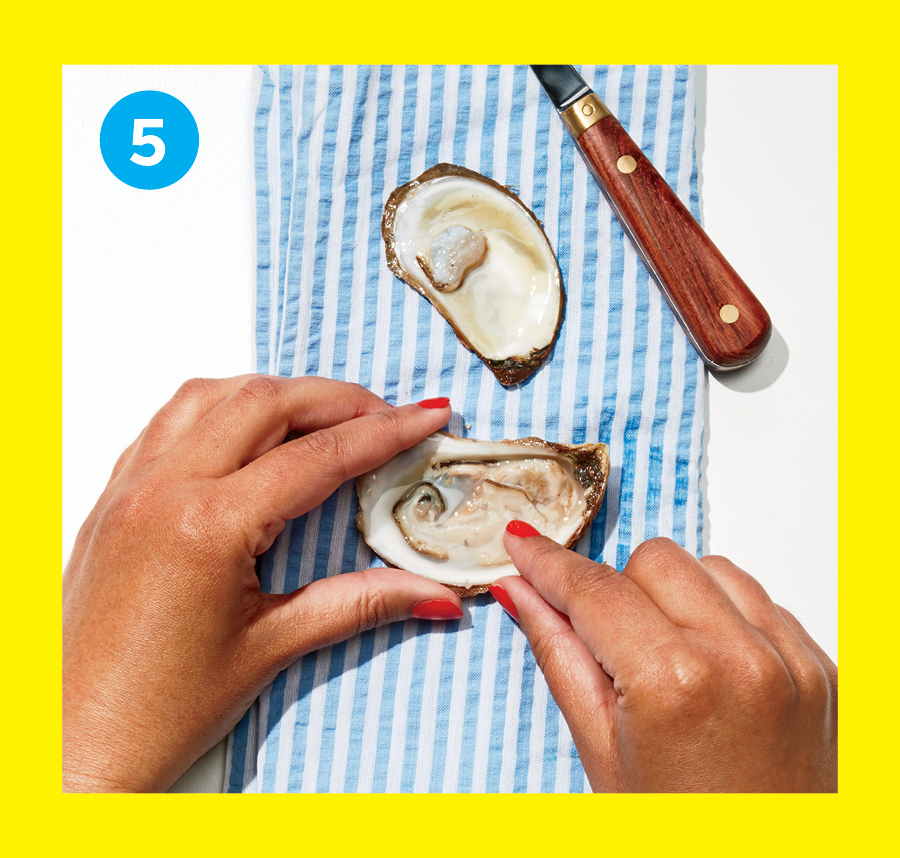 6. Slide knife under oyster to sever muscle. Set oyster on a platter filled with ice. 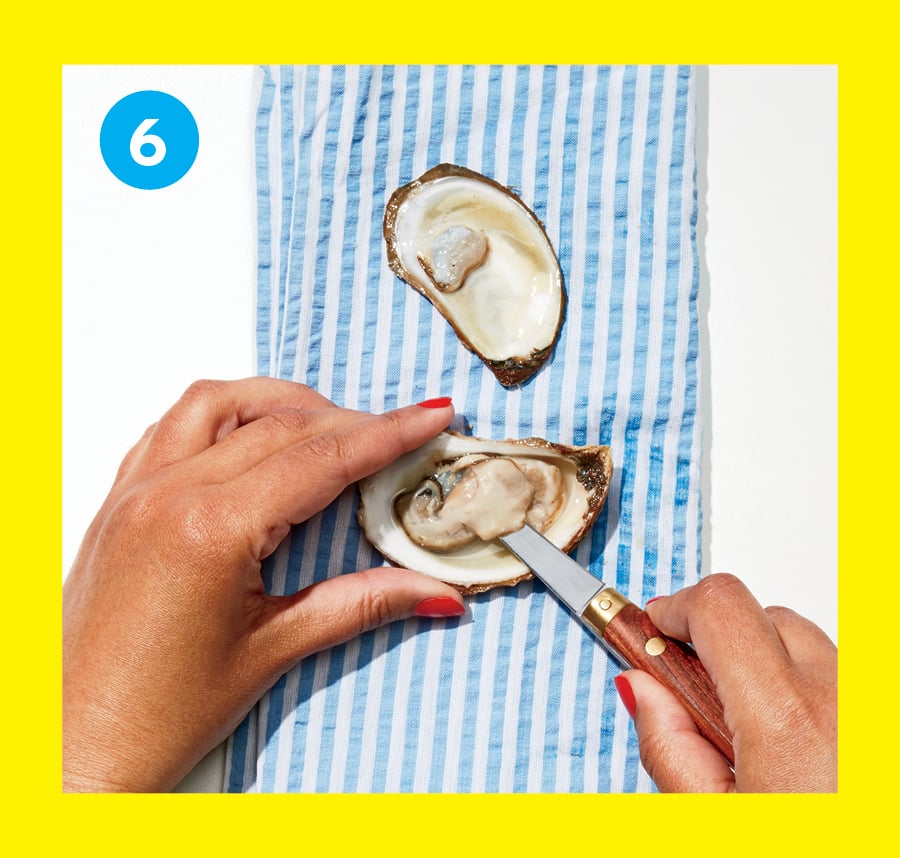 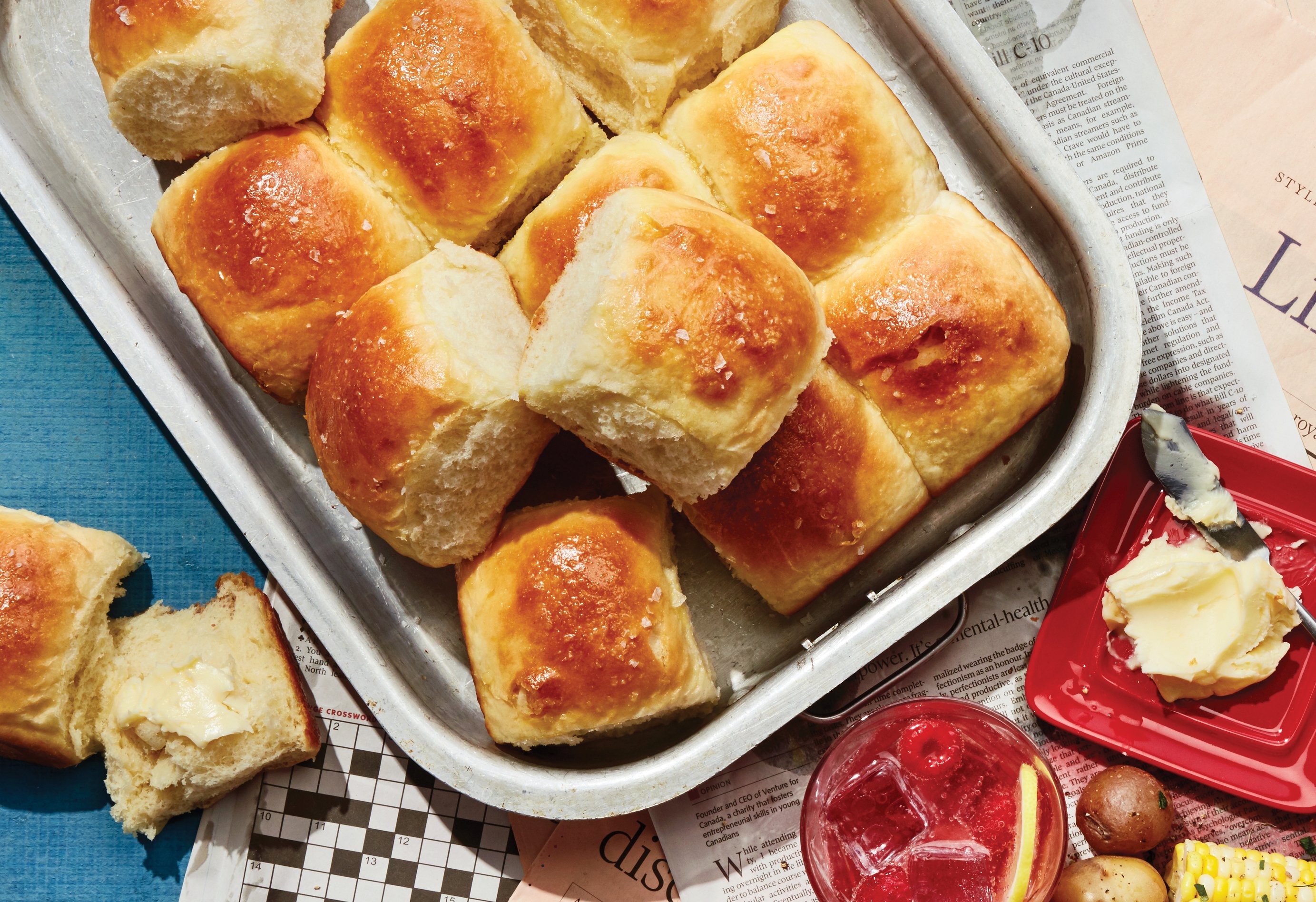 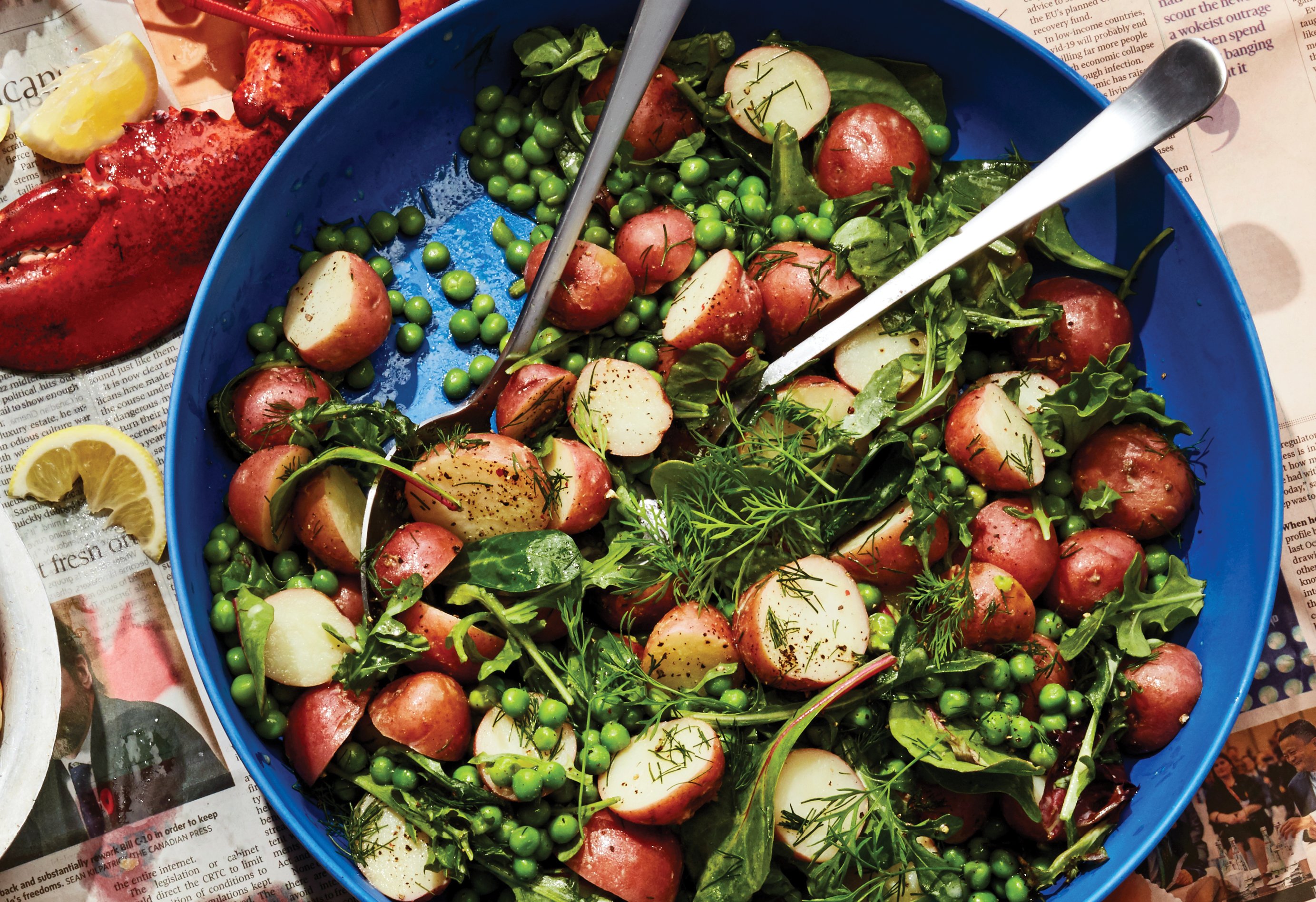 Early, or “new,” potatoes are harvested in July on P.E.I. They’re small, tender and thin-skinned. 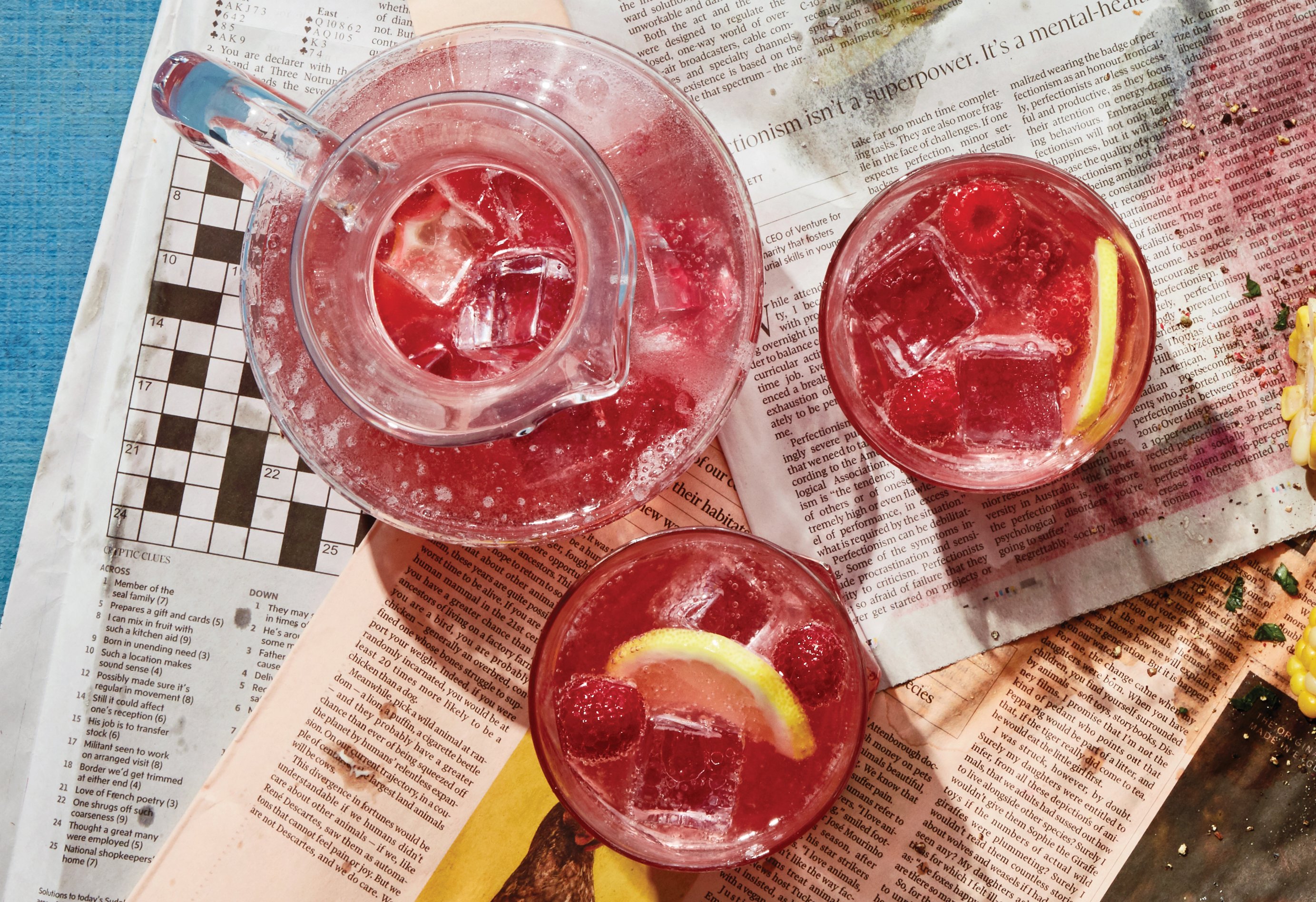 This refreshing summer sipper was a favourite of P.E.I.’s most famous literary heroine, Anne of Green Gables. 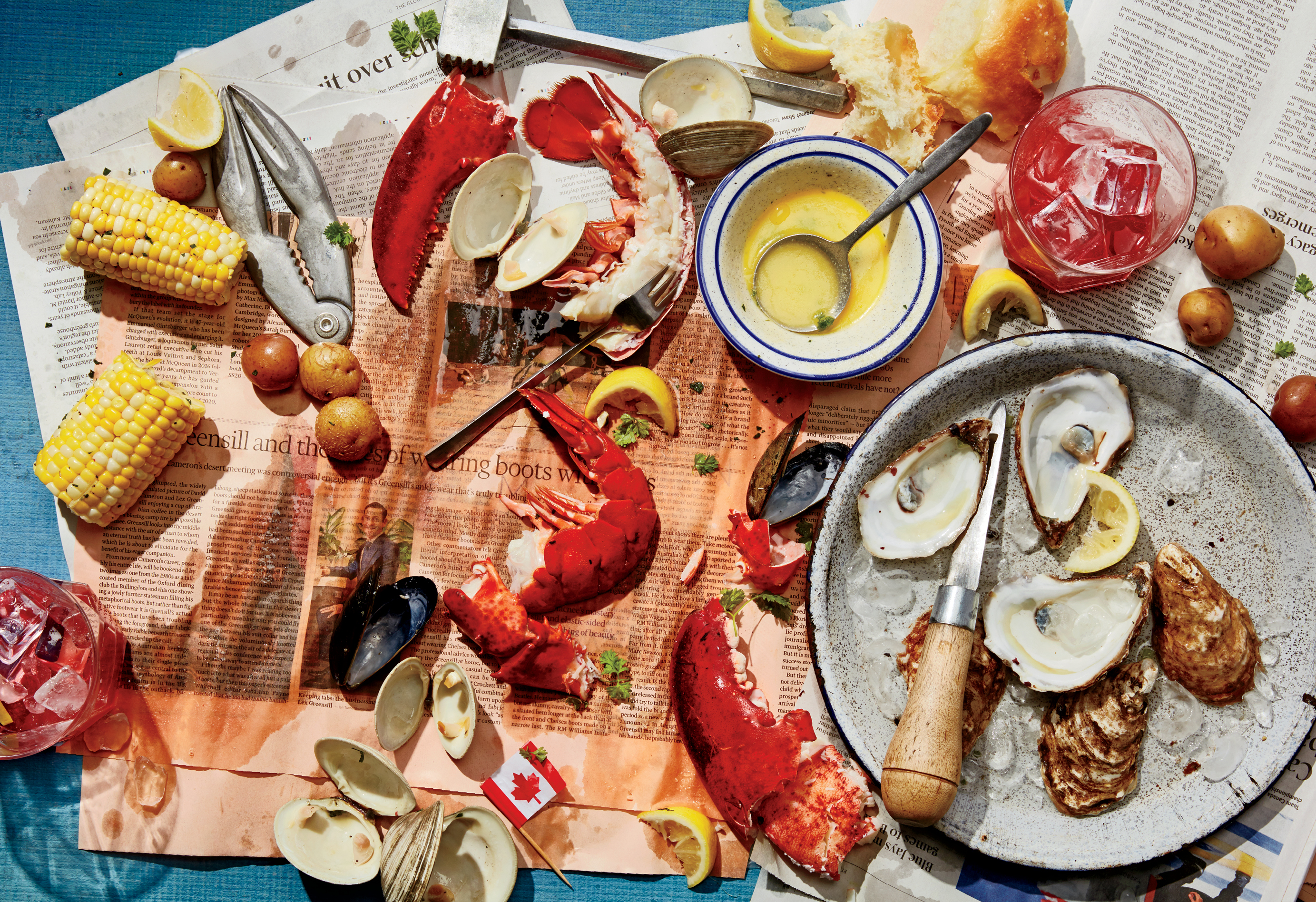 The Art Of Sourcing Responsibly

Bethany McCarthy always wanted her own boat. After more than a decade of working for her now ex-husband, who is a fisherman, the mother of two decided to make the investment in 2015.

Now, as captain of Ms. High Maintenance, McCarthy catches thousands of pounds of lobster every year, including the crustaceans she donates to local fundraisers.

In recent years, her industry has increasingly focused on sustainability, she says, including decreasing trap limits, increasing the size of harvestable lobsters and throwing back large females to keep the population healthy.

Most stores are good at holding this pricey product at the cold temperatures lobsters need to live, but once cooked, lobsters should be eaten or refrigerated quickly for best taste and freshness. For those opting for the experience of picking a lobster from a tank, she has a simple tip: Look for “a lobster that is lively after being taken out of the water.”

The first time Blayne Peters, aquaculture manager at Elsipogtog First Nation, took an oyster-harvesting boat out on the saline Richibucto River, it felt like “driving on balloons.” Now, after a decade managing the Mi’kmaw community’s shellfish program, Peters takes pride in their world-class oysters. And while he might not like eating them—the first and only one he tried was when he took the job—he knows they’re tasty. “There was this older guy who worked for me, and every time we took a break you could hear him slurping away at the oysters,” he says with a laugh. “He liked them too much.”

While sorting oysters, which are sold to the renowned New Brunswick company Beausoleil, Peters puts aside any that haven’t reached full size in the typical four years, to allow another year’s growth. For him, it’s a simple way to respect the creatures, as well as their customers.

Laura Halfyard grew up hauling cod traps and pushing wheelbarrows in a village along northern Newfoundland’s Iceberg Alley. Today, she farms blue mussels alongside her father at Connaigre Fish Farms, a leader in an industry that produces nearly 3,000 tonnes annually in Newfoundland and Labrador.

Halfyard is seeing climate change warm the oceans— quickly. The province’s mussel farmers use biodegradable cotton “socks” to grow mussels instead of plastic mesh, which can become ocean junk. Because mussels filter feed for plankton, they can be grown organically, have a relatively low carbon footprint and are full of vitamins, minerals and fatty acids. “They’ve got the perfect nutrient profile,” she says. “And they’re so easy to cook.”

Halfyard recommends buying at least a pound of mussels per person and steaming them for eight to 10 minutes. Their hairy beards, or byssal threads, are mostly removed during processing—tug stragglers off before or after cooking.

To get round, hard-shelled quahog clams, Nancy Purdy and her husband, Charles, take tiny baby clams they’ve raised in tanks and scatter them across McNabs Bay in Malagash. “They dig into the bottom,” she says. “To get to the littleneck size . . . it probably takes three or four years, so it’s not get-rich-quick.”

Their company, Bay Enterprises, has farmed shellfish using both modern and natural methods for more than 25 years. Their daughter, who makes jewellery out of the species’ striated purple shells, works alongside them, helping sell their oysters and clams locally, as well as in Quebec and Ontario, and overseas.

Littleneck, cherrystone and chowder clams are three different sizes of quahog: small, medium and large, respectively. “If you are going to steam them, the littlenecks or cherrystones are the best,” says Purdy. “The big ones will be good for a chowder.” She suggests looking for a harvest date and remembering that any shellfish that smells bad is likely dead.

In the fall of 2020, decades of uncertainty sparked by one ambiguous Supreme Court phrase exploded into racist violence against Mi’kmaw fishers on Nova Scotia’s south coast.

The 1999 Supreme Court case ruling in R v. Marshall affirmed Mi’kmaq treaty rights that allowed them to earn a “moderate livelihood” by fishing outside of the federally regulated commercial season. But exactly what that means has long been a fierce debate: Mi’kmaq insist their right to self-govern means defining it for themselves, while others want Fisheries and Oceans Canada (DFO) to decide. Many Atlantic Indigenous communities—with around half the median income of non-Indigenous communities—rely on moderate livelihood fisheries in snow crab, oysters, bluefin tuna and lobster.

In September, harvesters from Sipekne’katik First Nation launched their lobster boats outside of the commercial season. They say their smaller boats are less safe alongside larger commercial vessels, but it was also an assertion of treaty rights. Within days, protests by non-Indigenous harvesters and their supporters turned violent: A band member’s van was lit on fire and a lobster pound known to buy Sipekne’katik-caught lobster was looted and torched.

This past spring, Chief Mike Sack announced plans to restart the moderate livelihood lobster fishery, despite assertions from the DFO that harvesting out of the commercial season won’t be allowed, for conservation. The Sipekne’katik reject this argument: Every year, the band catches about the total equivalent of one commercial lobster licence. It has partnered with Dalhousie University researchers to affirm the sustainability of their harvests. “It’s a matter of our community members being able to provide for themselves and their families,” Sack said in a press conference, reiterating that this fishery, which his community has stewarded for thousands of years, is a constitutional right.