That frog isn't a harmless cartoon. 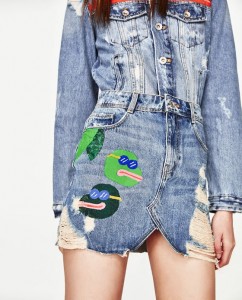 Zara is known for its fast fashion — but sometimes, it seems, they send designs off to production a little too quickly.

The Spanish retailer introduced a denim skirt with a cartoon embellishment that looked a lot like Pepe the Frog — a character that’s taken on anti-Semitic and racist connotations online. It was declared a hate symbol by the Anti-Defamation League last fall.

Zara pulled the skirt from its website after the internet freaked out, with a spokesperson telling the Guardian that there was “absolutely no link” to Pepe, and that the artist who designed the skirt, Mario de Santiago, based the image on a painting he’d done four years ago.

Who (or what), exactly, is Pepe? Cartoonist Matt Furie introduced the frog on Myspace in 2005, and started working with the ADL last fall to try and “reclaim” Pepe. The “chill” cartoon went from being a meme used by celebs like Katy Perry and Nicki Minaj to a symbol of hate when white supremacists and online trolls started using the frog as a mascot, modifying it with a Hitler mustache, Nazi uniforms and KKK robes.

Zara has come under fire for questionable designs before, like a set of pyjamas that resembled Nazi concentration camp uniforms it pulled in 2014, and it’s certainly not alone in making marketing missteps. Urban Outfitters has also been a repeat offender, two years ago Canadian designers D-Squared named an entire line “Dsq–w” (derived from a derogatory word used to refer to indigenous women), and earlier this month Nivea pulled a social media ad campaign with the slogan “White is Purity.”

More:
Subscribe to our newsletters
What young Conservatives really think about the candidates, Trudeau and “Canadian values”
53 gorgeous grey hairstyles that will inspire you to ditch the dye