You're the DJ: How to construct the perfect playlist 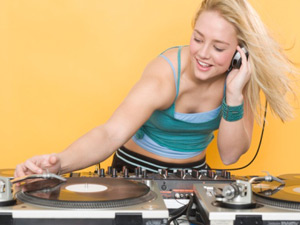 You’ve got the food planned, and the décor arranged. But what about the music? Don’t stress – we asked the experts about their go-to tips for planning a playlist to fit any summer event.

For making sure everyone dances
Getting everyone moving doesn’t have to be complicated, so if you’re planning to get people onto the dance floor, don’t overthink it. “It doesn’t matter how mind-blowing or obscure your record collection is,” says Sofi Papamarko, a Toronto-based music writer who also deejays locally. “The important thing is to give people music that they already know and love. Play hit after hit, and then when the momentum’s going, you can slip in that killer soul track that will be new and welcome.” Just please, skip the ABBA.
Playlist picks: Lady Gaga, Stevie Wonder and Madonna

For a dinner party
“I have a sure-fire playlist tip that always works,” says Mason Wright, who moonlights from his job at The Globe and Mail as a local DJ. “Pick one tune that exemplifies the mood you’re going for, slot it in as track 7, and build around that ‘anchor’ song.” Wright’s advice makes the job much less intimidating: relax, find that one song that’s a perfect fit and fill in the blanks from there. Now you can focus your energy on dinner.
Playlist picks: Norah Jones, Nina Simone and Jakob Dylan

For a kid-friendly event
Having kids over for a backyard barbecue doesn’t mean that you have to suffer through a Justin Bieber-fest. “The simplest tip is to just make sure the music’s catchy,” says Bryan Borzykowski, who frequently writes about music (when he’s not busy taking care of his two-year-old daughter, Molly) “Kids like to sing along, but they don’t have great attention spans, so stick to infectious three- to four-minute pop songs,” he says.
Playlist picks: Beatles, The Beach Boys and Feist

For a car trip
“Classic rock is a staple of any good road trip,” says Amy Cole from the band Rural Alberta Advantage. She should know: the band spends a huge amount of time on the road, touring. “The goal should be to make the mix enjoyable for the majority of the people in the car, otherwise somebody’s going to be making somebody else miserable – not a good vibe for confined spaces.”
Playlist picks: Creedence Clearwater Revival, Bruce Springsteen and the Guess Who

For hitting the gym
Hitting the gym is easier if you have a solid soundtrack. “For me, there’s got to be a slow and steady build in the songs,” says singer-songwriter (and fitness addict) Bunmi Adeoye. “If there’s word and beat repetition in the song, that works well too. Power singers like Gossip’s Beth Ditto are unbelieveable for making you feel like an urban warrior. I could run forever with any one of their songs.”
Playlist picks: Metric, Gossip and Kelly Clarkson