Why you should practise saying no

Does saying no make you feel uncomfortable? Follow this advice to transition from yes-person to standing your ground — politely. 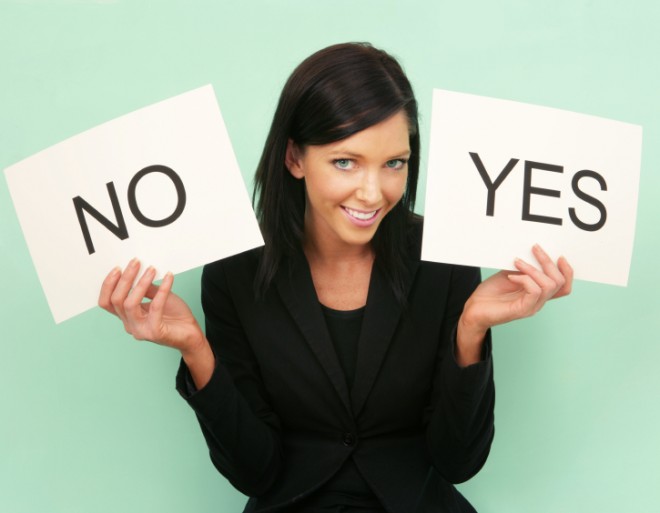 The idea that the word no is a force for good is a hard sell in our yes-centric culture. Saying no is often associated with negativity or closed-mindedness. It’s linked to fear or cautiousness, weakness even. Very few people want to define themselves as a “no-person,” while the increasing numbers of self-described “yes-people” are continually praised for being go-getters and risk-takers.

That should change, though, because the word is not negative; it’s an affirmation of personal belief and responsibility, argues Judith Sills in an article for Psychology Today.

“No is a moment of clear choice,” says Sills. “It announces, however indirectly, something affirmative about you.”

It says, for example, that you may not be able to help a friend with a project because you have other priorities or that you refuse to endorse a policy at work because it doesn’t square with your sense of right and wrong. In these situations, saying no isn’t a cop-out, but rather a way of standing one’s ground.

In relationships, no is of particular value, argues Sills.

“We love others, give to others, cooperate with others and please others, but we are, always and at the core, distinct and separate selves. We need no to carve and support that space,” writes Sills.

Our experiment with the power of no is ongoing, says Sills. It changes as we change, starting out from the toddler’s “No! No! No!” to the adult’s polite but firm “No, thank you.” But that evolution doesn’t make saying no any easier. Many of us shrink from saying it for fear of hurting others or of causing too much fuss.

To combat that negative association, Sills advises people to follow certain guidelines. Start slowly, she says. If it doesn’t sit right yet, start with saying “I’ll think about it.”

“ ‘I’ll think about it’ puts you in control, softens the ground for no, suggests you are actually weighing important factors and, most importantly, allows you the opportunity to think things through,” Sills writes.

Another tip for those who cringe at the idea of having to say no: Rehearse.

“Ongoing situations — a demanding boss who keeps piling on the work, a needy family member who never limits her requests, a mate who badgers until you cave — can benefit from your thoughtful, private rehearsal.”

Practice won’t make perfect, but it just may speed up that ongoing evolution from people-pleaser to self-aware adult. And who could say no to that?

FILED UNDER: confidence self esteem