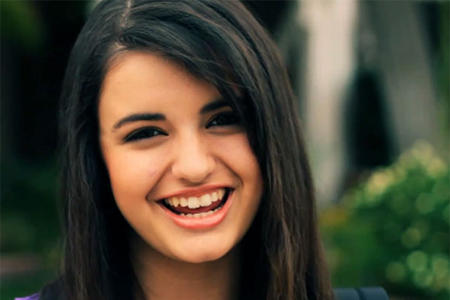 The old cliché has it that “sex sells.” But maybe we need to revise that statement for 21st century audiences because it seems that silly really sells. Just ask 13-year-old Internet sensation Rebecca Black. Since it went up last Monday, Black’s music video, “Friday,” has been viewed more than 30 million times, reports NME. The UK music site goes on to speculate that the teenager’s cheap and cheerful TGIF tribute—she sings about eating cereal and catching the bus to school, among other goofy details — may be on its way to becoming the most viewed clip on YouTube ever (a record currently held by Justin Bieber, with 500,000, 000 hits).

But that’s not all Black has to celebrate this week. The song, which can only be described as painfully catchy (much like pinkeye), has been a popular download on iTunes, with some speculating that it’s been downloaded anywhere from a few hundred thousand to two million times.

Internet fame doesn’t come without a price, however. Black appeared on Good Morning America last week to talk, in part at least, about the harsh reception she’s received from those who claim it’s the “worst song in the world.” (Believe it or not, that’s one of the more diplomatic reactions she’s gotten online.) To silence (or perhaps unintentionally fuel their rage) Black is rumoured to be releasing an acoustic version of “Friday” to prove her singing chops to dissenters once and for all.

Black’s sudden popularity has many wondering whether or not viral video is slowly killing the legitimate pop song once and for all. It’s a good question. But not easily answered, especially given the current state of pop music. I don’t know about you, but I can’t say that “Friday” is any better or worse than Katy Perry’s “California Gurls.” In fact, I think we could probably host a pretty rich debate about what qualifies for “worst song in the world” status.

But the news of Black’s success must be a source of frustration to those artists who are working to gain the public’s notice, without the aid of a heavy kitsch factor in their favour. Even some of the most popular acts are having a hard time competing for audience attention. Today the New York Post’s gossip site, Page Six, claims that Rihanna’s Loud tour is struggling to fill seats.

Maybe the pop star should consider a cover of “Friday” to boost sales?