Working out as a couple: The pros and cons

I know couples are supposed to have different interests but what happens when your interest becomes his as well? In my case, I introduced my boyfriend to yoga and now he can’t get enough. It’s yoga talk all the time (which I actually don’t mind.) 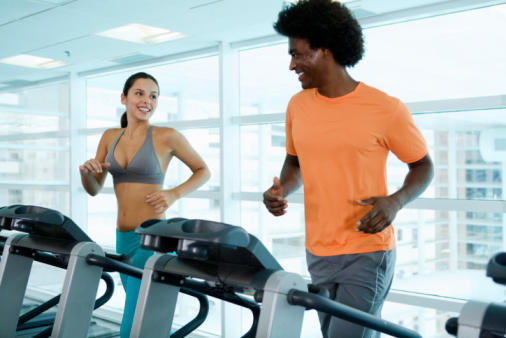 I know couples are supposed to have different interests but what happens when your interest becomes his as well? In my case, I introduced my boyfriend to yoga and now he can’t get enough. It’s yoga talk all the time (which I actually don’t mind.)

But now he wants to go to the gym even more than I do, and his body is looking better than mine. I’m completely jealous — why did I ever introduce him to yoga in the first place?

Is it a good thing or bad thing to work out with your partner? It does get me more motivated to go and it is more fun when he’s in class with me. But then I get jealous when he can go and I can’t and he gets jealous when I go and he can’t.

And, also, there is jealousy that he’s really good at yoga. I should be supportive, I know, but I’m also like, “But I’ve been practicing that move for years!”

Another pro of him working out with me is that we get to spend time together. Because I am a single working mother who likes to exercise, I can now spend time with my boyfriend without feeling like a bad mother, not spending enough time with my child or on my work.

But, then, sometimes in class, like if I’m in a headstand, he’ll poke me in the ribs. Yes, it is funny. But, you know, I’m trying to be all Zen-like and having him in a yoga class with me turns me into a silly school girl laughing with her boyfriend, while others in the class are actually there to Zen out.

I asked Mindy Blackstien, of BodyProud and Fame World Tour and about working out with your husband or partner. Is it a good or bad thing?

1. Blackstien says she works out with her husband “all the time.” She says there are several pros to working out with your boyfriend. “Common excuse and reasons to stray are often eliminated or at least overruled. When one of us is not feeling it, the other generally succeeds in motivating the other,” she says. She adds that it “encourages a deeper connection between two people and adds tremendous beyond the surface level value to the relationship.”

2. If you plan to work out with your partner, she says to discuss your goals, visualise your ideal body physique and know exactly what it is you intend to achieve. Then tailor your workouts accordingly. “When both partners are open and honest with themselves and with each other, new appreciation is garnered, additional trust is earned, mutual respect is enhanced and you tend to become each other’s own personal cheerleader.”

4. She says that since fitness and health are lifelong journeys, and we aren’t with our partners 24/7, working out is a wonderful activity to do together long term. “Doing so is similar to having an in-home private personal coach, nutrition advisor and activity partner whose services are free of charge,” says Blackstien.

5. There is something, she says, very sexy and appealing about spotting for a sweaty man or woman and or being hands on during the workout.

6. She suspects it’s quite common for partners to at least feel a little envious of each other when one can work out and is doing really well, while the other can’t. “But that’s not the only thought you can have. Think, ‘I get to touch his newly fit body!’ and, “He’s all mine!’ and, ‘If he’s accomplished that, then I’m for sure next!’”

What do you think? Do you exercise with your partner? Is it a good idea or bad? And, yes, I do at least get to say, “He’s mine!”