How Pandemic Life Brought These Women To The Skate Park

How women are building community, gaining confidence, and taking up space at the skatepark. 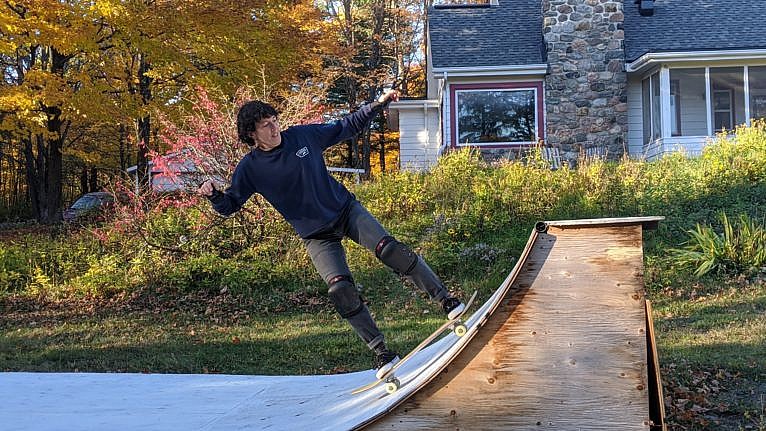 In early October, I started looking for skateparks with good lighting. Fall was well underway, and like everyone who’s gotten used to exercising outdoors, I was conscious that time was ticking on the hobby that has become a bright spot in a fairly small pandemic life. If I was going to pack in extra time with my skating friends—most of whom have day jobs—it would have to be after my son’s bedtime, after dark.

I played roller derby until the pandemic, and got into park skating in the summer thanks to some of my teammates—but it isn’t just displaced derby skaters filling up the skateparks. Across the country, women brand new to skates and skateboards or re-discovering an old hobby have been coming out in droves. In an environment traditionally populated by the young and male, women are building community, gaining confidence and taking up space in a way that likely will continue back when the COVID era wraps up.

These days, I find myself repeatedly checking the forecast, trying to match the rubric of sunny days and clear nights to the free time on my calendar. I’m reminded that this is what being really excited about something new feels like, and I am so thankful to have this feeling back.

I spoke with with five other women who have found their place, and a renewed sense of joy, at the skatepark. 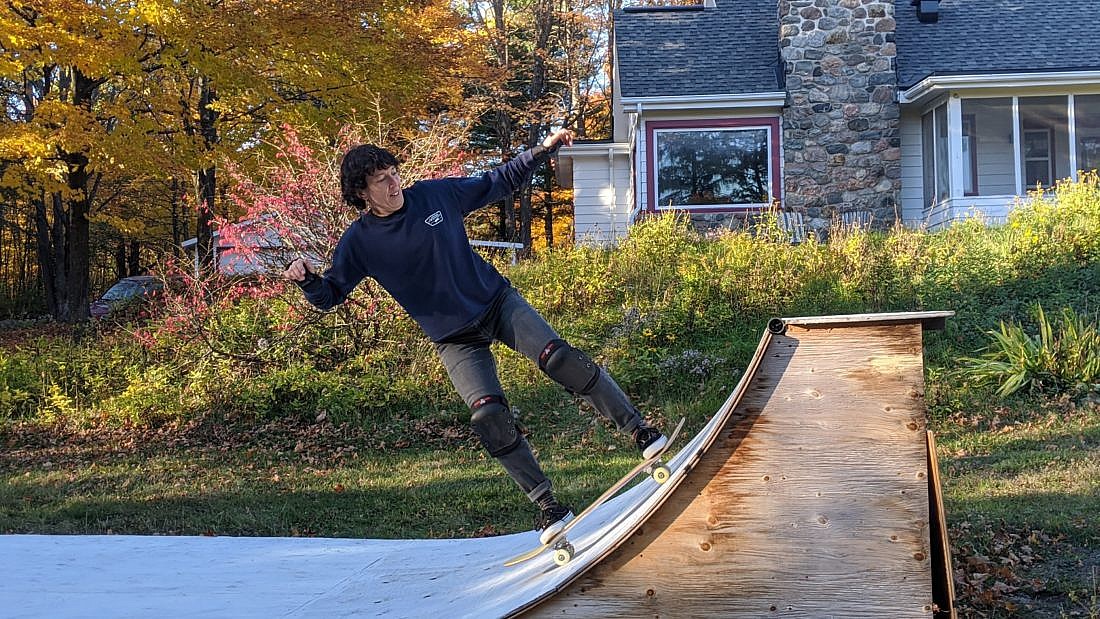 Kim Fera’s three daughters skateboard, so it was just a matter of time before their athletic mom stepped on a board to see what the fuss was about. She says she was awful but enamoured, and soon bought her own board, practicing while waiting at her daughter’s soccer practice last year.

It was in April, however, that things got real at their household: her youngest daughter asked for a skateboard ramp or a puppy for an upcoming birthday, so Fera bought the plywood and got to work. Now, she skateboards almost every day. “I am totally hooked on skateboarding, even though I can’t do any tricks yet.”

She practiced on the ramp every day in September, and now she can pump, a skill that involves rising up and then crouching fast at the top of the ramp to gain speed. She also practices at a local skatepark, sometimes with a 65-year-old friend. “It’s hilarious how nice people are (at the park). They don’t expect you to be able to do anything. It’s sort of freeing.”

Fera, whose family business makes cross-country ski poles, says she likes pushing herself to try new things, both for her body and her brain. “I think it’s really important to do new things, and things that are scary,” she says. “It’s so refreshing to do something with no firm goal in sight and no structure. If I learned how to do a kick flip I’d be over the moon, but if I only roll around in skateparks, I’d be pretty happy with that.” 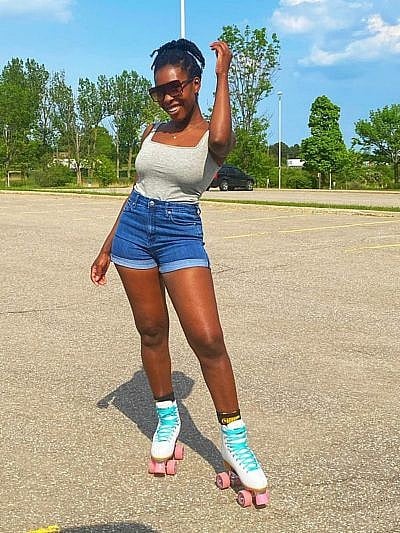 Arefeh Ghane credits the 2005 movie Roll Bounce—which features Bow Wow leading a ’70s-era skate crew — for planting the roller-skating seed in her mind. “It was the first time I saw Black people in skates.” Already an athlete, she took it up casually for a while in grade 10, skating with friends on Friday nights at Oshawa’s now-closed Coachlite roller rink. She hadn’t skated since, until the pandemic hit.

Suddenly, roller skating was invading her Instagram feed. “A friend bought a pair, and another friend bought a pair,” she said. “I was like, ‘this is clearly what everyone’s doing right now.’” She picked up some skates in May, and tried the skatepark for the first time in September. She’s still working on backwards skating and stopping, so the park was a challenge. Fortunately, Ghane found a welcoming community of female skaters eager to share their knowledge: the Durham Region offshoot of Chicks in Bowls Toronto.

“They are just really positive,” said Ghane, a public relations student at Humber College. “The first time I went to the skatepark… I was introduced to everyone and automatically felt welcomed and supported.”

Ghane says she’s encouraged by the diversity she’s seen among people taking up skating, which she credits partially to the low cost of entry — you don’t need an expensive pair of skates to get started. And since it happens in public space, there aren’t any gatekeepers. “There’s nothing stopping anyone from joining in and hanging out with you. There’s no physical barrier.”

Elly Pham has always been into extreme sports—surfing, skateboarding, even competitive muay thai fighting—but as a new mom during quarantine, she found herself losing touch with her community, getting less exercise than she was used to, and spending a lot more time on her phone. “I was looking at Instagram and kept seeing all these cool roller-skaters.”

In August, she drew up her courage and bought a pair of skates. After a few weeks on flat ground, she found herself staring wistfully at the neighbourhood skatepark. “I really had to talk myself into going… I always see younger, teenage skateboarders and even older men skating. It’s just intimidating. They all seem so comfortable.” Those feelings, she says, went away after her third visit.

Now, with mat leave over, Pham gets up early every morning to walk her dog and go to the skatepark before work (she’s a front-end software developer for Shopify). “Now, it’s just, ‘what can I work on, what can I improve on, what new trick can I try?’ I deserve to be there.”

At first, her skating community was mostly on Instagram, and much of what she learned was by watching videos. She’s since met several other women at the parks. “I was missing community during quarantine,” she says. Roller skating gave her stimulating new challenges and has made her feel more carefree. “I’ve learned that after you fall, you just keep going until you get comfortable.” 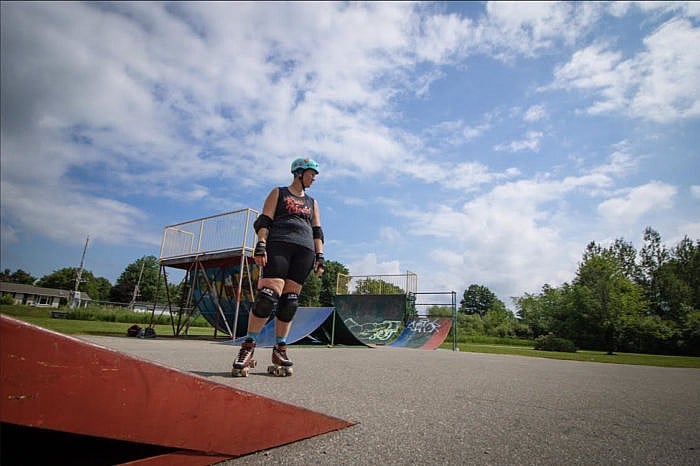 Danielle Cardinal first tried ramp skating at an indoor park in January, but took it seriously this spring as a way to spend time with her niece, nephews and roller-derby friends—whom she’d missed “tremendously” since lockdowns began in March.

Cardinal has skated with Ottawa Roller Derby since 2016; before that, she’d never been on quad skates. Now she hits the skatepark once or twice a week. She’s still working on dropping in (skating down a ramp from the top), but the combination of cardiovascular and mental exercise keeps her motivated to keep trying. “I have tried a few times and the wipeouts are legendary. It didn’t hurt as much as I thought I would. Sometimes your biggest obstacle is your mind.”

Cardinal, who works as a fire services emergency dispatcher, says park skating has taught her how to turn off negative feelings about herself and just play. “I am a very proud person, so sucking at something is not easy… Some of my other friends are progressing extremely quickly but I have to focus on what I can do, what I am proud of.”

Her greatest success, she says, is just taking up space at the park. “I am very tall: on skates about six foot two. I am a full-figured athlete, a plus-sized woman… I know at the park I stand out, but I hope more mature athletes see me at the park and feel like they can go there as well.” 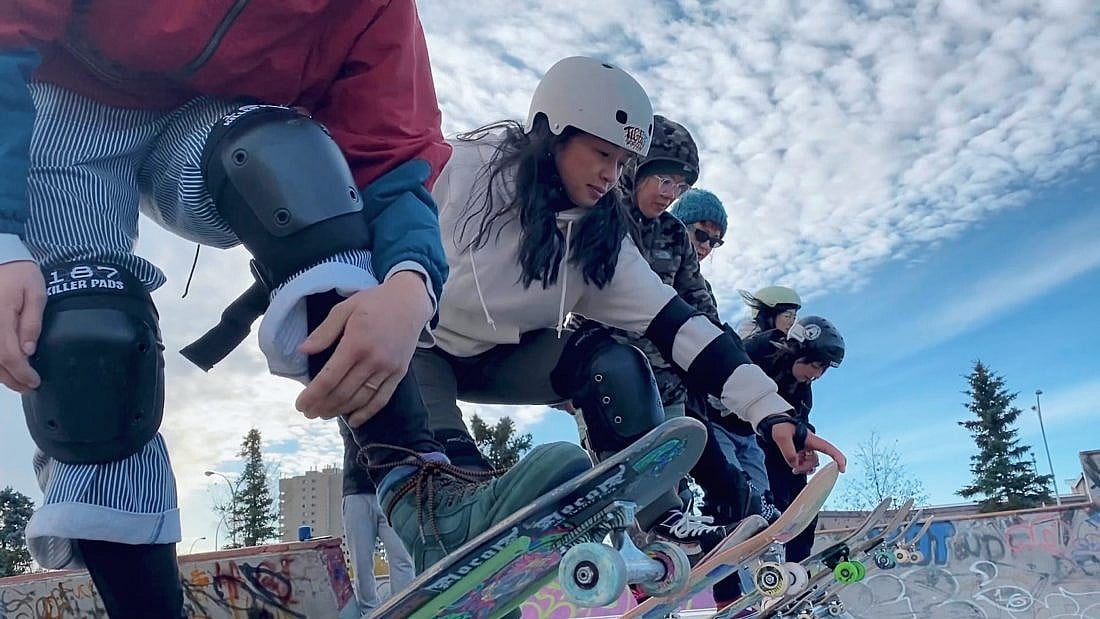 Denise Biziaev has a lot of layers: she’s a university program coordinator, a pastor, the mother of two young sons and now, a proud skateboarder. Her history with skating goes way back: she started at 12 but was bullied about it so much she gave it up.

“When the older grades found out I skateboarded… it was a full year of bullying. It was so bad,” said Biziaev. “I had zero confidence, never mind I had never seen another (woman) of colour who was a skateboarder. How much of an influence would that have had? I was already being made fun of for my stinky lunches; a Filipino girl bringing rice and fish…. I became this closet skateboarder.”

Now she’s back, and is part of a multigenerational skateboard crew where she can be an example for the group’s young girls. The Tigers Skate Club got started last year, but picked up in earnest as the pandemic led droves of new skateboarders to seek out community and guidance.

Biziaev says the Tigers sometimes encounter sexist attitudes about women skateboarders, but it’s easier to counter them when surrounded by support.

“In such a male-dominated sport, some people, sadly little kids included, make it known that they’re of the opinion that we don’t have a place here… Honestly, that’s when it becomes super fun to have a club to skate with. The younger boys are quite astonished when they see 20 girls and women roll in.”

She says skateboarding has made her more physically and mentally tough, but also more humble. “Nothing is more cool, crazy, sad and irritating than some six-year-old who’s killing it. Skateboarding is an amazing challenge because it keeps you humble and is super empowering.”