Whether you're a fan or a hater of the incredibly precocious and disturbingly adorable Pinkett-Smith progeny, this new music video from the narcissistically named Willow Smith will blow your mind. 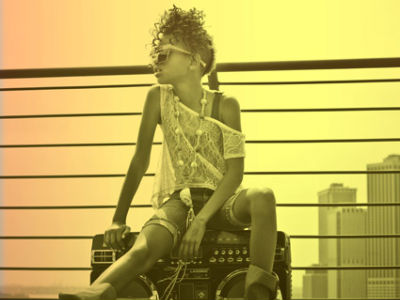 Whether you’re a fan or a hater of the incredibly precocious and disturbingly adorable Pinkett/Smith progeny, this new music video from the narcissistically named Willow Smith will blow your mind. Willow is only nine years old, yet she already has a music video that rivals the coolness of anything M.I.A. or Beyonce have put out in recent years. The video for “I Whip My Hair” does raise a few questions though, namely: is it weird that she’s wearing press-on nails and eye makeup at less than a decade old? Is it bizarre that she’s strutting down a hallway surrounded by hysterical adults while wearing a T-shirt that says “I love me”? Do we have our doubts that this tiny girl had any real creative control over this heavily produced child-star making effort? Yes, yes and yes.

The numbers don’t lie: girls and women are beating boys and men in the classroom and often the workplace, and that gap is only expected to widen. Boys today get lower marks, study less and are more likely to drop out of high school than their female counterparts, and though men still dominate in areas like engineering and computer science, women now outnumber men in fields like law and medicine. Maclean’s has an eye-opening piece on what is causing the gap, the problems it creates, and what can and should be done – if anything.

Celine Dion has checked into a hospital to prevent the early delivery of her twins. The 42-year-old ballad queen is resting at St. Mary’s Medical Centre in West Palm Beach, Florida, to prevent the early delivery of the twin boys she’s carrying. The Quebecois superstar became pregnant with two boys early this year after undergoing in vitro fertilization for the sixth time.

The parents of children attending an elementary school in Meaford, Ont., are requesting that the school shut down their Wi-Fi internet access. The parents are concerned that the Wi-Fi might be damaging their children’s health, despite a lack of evidence to support their claims of health risks. A decision is pending on whether the school will turn off the wireless and plug back in.

Thousands of women in the war-torn Democratic Republic of Congo took to the streets of Bukavu to protest the estimated 15,000 rapes that took place in 2009 alone. Sexual assault is used systematically as a weapon of war in the Congo, according to march organizers. A top United Nations official admitted last month that the UN has failed the thousands of victims of rape who have survived the epidemic of sexual abuse sweeping the country.