News roundup: No, these tampons are not gold-plated; Kelly Preston describes her “silent birth”; an Alberta man wears the same unwashed jeans for 15 months; a study debunks the link between the pill and weight gain; and new MTV program Skins verges on child pornography. 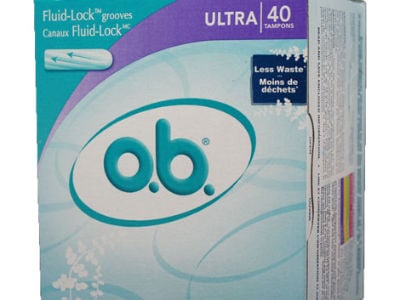 How devoted are you to your tampon brand? Devoted enough to spend $79.99 on a single box? That’s how much a package of the recently discontinued OB Ultra tampons is going for on Amazon. Johnson & Johnson, the company that made the dubious move of discontinuing the high absorbency size, cited business reasons. Apparently not enough women were purchasing the large, applicator-less tampons, but those who once depended on the brand are angry. One woman likened taking away her OB Ultras to “taking my right to breathe.” OB is also making headlines due to a recent supply problem that saw massive shortages of all sizes of OB tampons late last year. Johnson & Johnson says the problem has been rectified, but sadly, the Ultra OBs are gone for good.

Picture this: a pregnant woman is in the hospital maternity ward in the throes of labour. She’s surrounded by doctors, nurses and her husband, and yet everyone in the room is totally silent. Sound weird? Not if you’re a scientologist! John Travolta’s wife, Kelly Preston, took the time to explain on the Today Show why giving birth in complete silence is totally the right way to bring a child into this world and not at all bizarre. Shh!

How often do you need to wash your jeans? According to one student at the University of Alberta, once every 15 months. Josh Le wore his raw denim jeans for more than a year without washing them, for the sake of both fashion and science. Raw denim has none of the chemicals usually used to treat the fabric, and it is recommended that they be worn for months without being washed so that they can form to the shape of your body. Le took it a step further and waited a full 15 months. He then tested the bacteria content of the jeans, washed them, and tested them again. Surprisingly, the critter count was not all that different before and after the wash. Lesson: wash your jeans less, but maybe skip the part where you advertise it to the world.

Is there a link between the birth control pill and weight gain? A new study says no. The Oregon Health and Science University has just published the results of new research that debunks the commonly held belief that the pill causes weight. Scientists studied Rhesus monkeys and found that monkeys of a healthy weight experienced no weight gain due to the pill, while those who started out obese actually lost weight. “We realize that research in nonhuman primates cannot entirely dismiss the connection between contraceptives and weight gain in humans,” said head researcher Dr. Judy Cameron, “but it strongly suggests that women should not be as worried as they previously were.”

You may have already heard about Skins, the controversial new MTV television show that depicts teens in some pretty hardcore scenarios: doing drugs, having sex and breaking the law. Parenting organizations were up in arms well before the show hit airwaves earlier this week, and now MTV itself is considering dialing it back a bit. The network announced that they are concerned some of the content in the coming episodes may violate federal child pornography statutes. The show features actors aged 15-19, many of whom have never acted before, in scenes that include simulated masturbation, implied sexual assault, and teenagers taking off their clothes and getting into bed together.