Why he loves your flaws

One man explains why women's quirks are what really knocks a guy’s socks off. 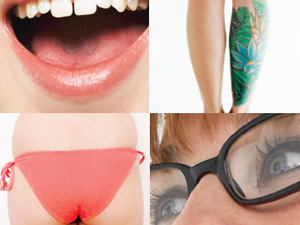 Contrary to popular belief, men (at least those worth dealing with) don’t fall in love with perfection. We may chase Venus down the street, but it is, in fact, the quirk the crooked mouth, the tiny bald patch, the hiccup, the broken tooth that makes us fall madly. Several years ago, I became re-acquainted with a young lady I’d known in high school. She’d been lovely then, and now she was gorgeous. I was attentive, more than I’d ever been when we were teenagers, and, eventually, my attention got around to her feet cupping a heel in my palm, lifting it. “Oh,” she said. I lifted the other. “My feet,” she said, withdrawing both of them and suddenly I was back in grade 10, with her saying, “My feet are square! Don’t look at them!”.

This time, though, I did look. And at that moment, 15 years after we’d first met, I fell for her, completely her and her remarkably square feet. Granted, she has since been married (to someone else) and had kids, but my point remains: It was the thing she’d always seen as a flaw that finally got me.

Plenty of men talk about scars and crooked noses with more adoration than I’ve ever heard them express for tits or ass. And it’s not always physical.

As my friend Ian told me, “I’d slept with this girl a few times, but we hadn’t really woken up properly together. Anyway, we went out for breakfast, and it was the way she said that word breakfast weird, like we were really breaking a fast. She drew out all the vowels. Some words she just says weird. That’s the thing that got me.”

Then there’s Kevin, who told me about making up with his girlfriend: “We’d got in our first big fight. So I suggested we go for a walk to talk about things. But the madder she got, the faster she walked, until her arms stopped swinging normally. The rhythm changed, and they were moving in unison both arms swinging at the same time. It was the strangest, sweetest thing, and suddenly I wasn’t angry anymore. She does it all the time. That’s how she walks fast.”

Perhaps most telling is the story of my friend Josh, told to me by a mutual acquaintance: “Josh was friends with a girl who was really beautiful. He thought she was awesome, and sexy as hell. They didn’t see each other for a few days, and then they were going to a play. He picks her up, and suddenly there’s…nothing. He doesn’t feel what he did before. He has no idea what it is. But then, in the theatre, just before the lights go down, she says, I got my teeth capped, Josh. Didn’t you notice?'”

These faults need not be apparent to everyone. My friend Paul recalls a woman who seemed physically perfect. “She really was the most beautiful woman I’d ever met. I was clearly playing out of my league. But at some point she made me feel the back of her head, and there was this very pronounced dent. It’s not that I moved up a division or she moved down. It just made her more real to me.” Paul went on to marry this lovely, dented woman.

Consider yourselves warned, ladies. We adore the things you might think flawed. Cap your teeth, paint your bald spot, swallow your lisp, clear-cut your brow, fake your nails, hide your outie, and we might never get the chance to fall for you to pull back your hair, see your ridiculous ears and collapse with love and longing.