Why Bridesmaids will have you laughing at burping

The trailer for Bridesmaids looks chuckleable; NASA finds 1000 new planets; Punxsutawney Phil sees his shadow; Torrontes may be the next big white wine; and finally, that collection of Sarah Palin quotes you’ve been waiting for. 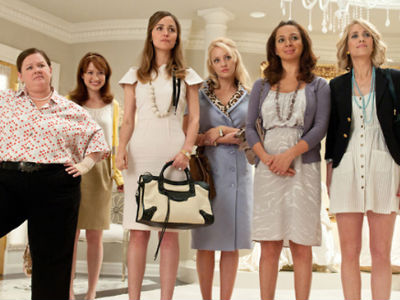 Finally, an all female ensemble comedy that includes women who actually burp! The trailer for the upcoming film Bridesmaids has just been released, and it is hee-larious. Starring the very funny Kirstin Wiig as the maid of honour to Maya Rudolph’s blushing bride, the flick is the latest from the team that brought you Knocked Up and 40-Year-Old Virgin. We’re not expecting a mature and thoughtful assessment of what it means to get married, but we do intend to laugh as Wiig thrashes around in the chocolate fountain. Bonus points: John Hamm shirtless in bed. Yum.

Relief is on the way! Punxsutawney Phil popped out of the ground as he does every year, and didn’t see his shadow. If we are to believe whatever superstitious rodents tell us, this means that spring is coming early this year! For those of you who don’t believe in Phil, but did love the 1992 Bill Murray classic Groundhog Day, here is a fun list of little known facts about the film.

Is there life on other planets? While that question is still up in the air, a recent discovery appears to up the chances, as NASA announced their Kepler telescope has identified at least 1000 possible new planets beyond our solar system. Their research has found that there are many more small planets than previously believed, and though many have yet to be verified, NASA is confident that around 90 percent will eventually be confirmed as actual planets. Whether they’re home to intelligent alien life, or even, you know, bacteria, has yet to be discovered.

Ready for the next big thing in white wine? According to an article in yesterday’s New York Times, it’s a vino from Argentina known as Torrontés, and it could be the next pinot grigio. It’s aromatic and floral with rich hints of citrus, and its recent surge in popularity prompted the paper’s wine panel to taste 20 bottles. Their verdict: while they range wildly in terms of style – from dry and crisp to heavy and rich – the ones that had enough acidity all seemed to hit the mark. Their number one choice? The 2009 Cuma, from Michel Torino.

Sarah Palin says some pretty outrageous things, and now fans and haters alike can rejoice in the first lady of Alaska’s witticisms and blunders in the silly little book Palinisms: The Accidental Wit and Wisdom of Sarah Palin. Here’s a fun example to get you hooked: “”If a caribou needs to be sacrificed for the sake of energy independence, I say, ‘Mr. Caribou, maybe you need to take one for the team.’ ”