Why are teenage girls the butt of so many TV jokes?

A new study from the PTC calls out TV shows that make offensive jokes at the expense of young girls. 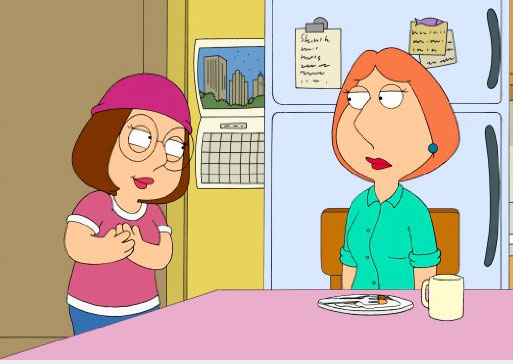 The Griffin’s teenage daughter Meg (left) on Family Guy is voiced by Mila Kunis, but constantly made the punchline to show jokes (Photo courtesy of Fox).

Do TV writers have some explaining to do when it comes to how they represent young women? A recent study that surveyed more than 230 contemporary TV series’ certainly suggests that may be the case.

According to the Parents Television Council, nearly a third of the TV shows they observed revealed a troubling tendency toward making young women the butt of offensive sexual humour.

To the U.S.-based advocacy group, which campaigns for more family-friendly entertainment, these jokes aren’t just a harmless bit of fun but rather rise to the level of “sexual exploitation”.

Some of the jokes or scenarios that made the offensive list include those that centered on keeping a young woman as a sex slave and a joke about killing prostitutes.

Laughing yet? Me either. But maybe you just have to be a fan of the TV series Whitney or Family Guy to really get it.

The survey uncovered another, creepier fact that the culture may want to linger over for a while, however. Not only are young women made the butt of demeaning sexual jokes and clichés, but they’re TV writers’ preferred targets, with many series choosing to apply adolescent ideas about sex to underage girls about 10 percent more than their usual targets of — you guessed it, gals — adult women.

While the study only confirms that there really is nothing harder to be than a teenage girl, here’s hoping it may also prompt the adults who are both making and watching TV to get a little more vocal in their opposition to seeing young women act as both punchline and punching bag.

Because while TV writers and networks may ignore the criticism and hide behind the argument that dead hooker quips are simply a joke, viewers might well wonder why they don’t spread their humour more equitably, and make hay out of young men being used similarly. That absence of fairness when it comes to being creepy indicates that TV writers just don’t find jokes that degrade or exploit young men as funny as those that target girls. And audiences should really wonder why that’s the case, if not for themselves, for the young women who deserve an answer, not just another punchline.

Do you think shows have taken it too far with these jokes? Or should TV watchers be less sensitive? Tell us what you think in the comment section below.