Who does Thanksgiving better: Yanks or Canucks? 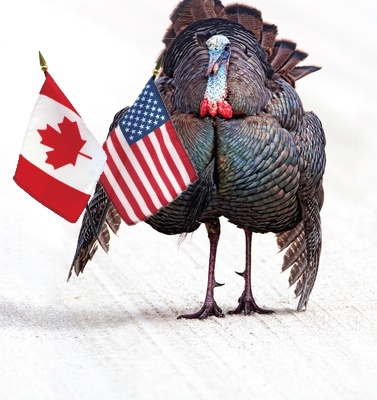 Thanksgiving, Canadian Thanksgiving, is fast approaching, and yes, I need to be specific here. you see, as a Canadian living in the States, I’m frequently asked which of the Thanksgivings I prefer to celebrate. And on both sides of the border, though the question may start in the spirit of a lighthearted chuckle, one wrong move can drastically turn the whole conversation into a record-scratching, earth-shudders-to-a-halt, DefCon One situation involving national pride.

People take their Thanksgivings very seriously, and I don’t blame them: Thanksgiving is the best. Who wouldn’t want to lay claim to that? One thing’s for sure, though: It’s not a competition. I mean these are two distinct holidays, in two different countries — why must they compete? Wait a minute, is this a competition? Okay, fine: Let’s compete.

Well, for starters, Canadian Thanksgiving was the first one out of the gate. Check. It has infinitely more long weekend appeal, falling, as it does, on a Monday rather than a Thursday (ha ha — so weird). And okay, we didn’t really have Pilgrims or anything, but we celebrate all the same, and Give Thanks and have Family Feasts, and all of those good things. Plus, there’s football.

American Thanksgiving, on the other hand, has the Macy’s Thanksgiving Day Parade (good idea!) and crazy door-crasher sales on electronics that start at midnight (bad idea!). It involves a lot of casseroles with broiled marshmallows on top, an idea that I don’t think anyone can argue against. Sure, it was the original Thanksgiving or anything, but they celebrate all the same, and Give Thanks, and have Family Feasts, and all of those good things. Plus, there’s football. Okay, fine: Maybe they’re not that distinct.

And I love them both. To me, it doesn’t matter which one you celebrate as long as you celebrate, haul that whole family together and break bread in some way, whatever that means to you. Both Thanksgivings win for having all the warmth and appeal of a Great Big Sparkly Holiday (I’m looking at you, Christmas) but in a non-denominational, human being, super-inclusive way.

And seriously, let’s not even talk about Thanksgiving at all if we’re not going to talk about the food: nothing goes better with family fun than my stepmother’s rosemary-potato dinner rolls. Nothing. (This rule applies on both sides of the border.)

Thanksgiving also marks the commencement of eating season (another rule that applies on both sides of the border). I like to think of it as the time of year when I bake myself into a woman-sized shortbread cocoon and spend two and a half months eating my way out. Related: It’s also the time of year when I move the more ‘forgiving’ clothing to the position of front and centre in my closet. (“No, I’m not wearing yoga pants to dinner — ha ha, that would be ridiculous. These are simply my yoga-inspired comfort pants. There’s a difference.”)

I love to cook. I always start my thanksgiving meal planning well in advance and do special things like order a heritage bird from some lady at my local farmers’ market who very clearly just goes into her backyard and shoots at wild turkeys until she hits one and then charges $75.

I read all the magazines and try to assemble a meal that offers the classics with just a little nod to something contemporary. “Maybe this year, we’ll have chestnut purée instead of plain old mashed potatoes,” I’ll say to myself, marvelling at my own cleverness. When it comes to actual meal day, I’ll have everything ready to go. A lovely dessert, usually a homemade pie. That super-athletic wild turkey with its long, muscular legs sticking out of the roaster like it’s about to kick the oven door down.

Then we gather. And we dine. And make a huge mess. But mostly we hang out and talk over each other and laugh and argue and fall asleep on the couch zoned out on tryptophan.

So, please, no more questions about the two Thanksgivings. Can’t a person cook an entire meal for 12 people one month and then turn around and recreate the experience for 12 other people six weeks later? Only with more marshmallows? As though a girl couldn’t find two days out of the whole year to eat turkey and gorge herself on pie. It’s called a piehole, people. There’s a reason for that.