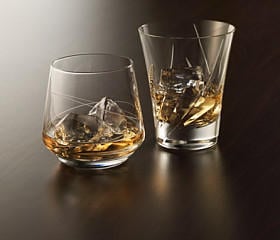 Jack Daniels has launched “Spike the Cookies,” a new marketing campaign aimed at encouraging women to drink whiskey. The ads feature happy ladies hanging out in the kitchen baking cookies, just like good women should. The only thing that differentiates these spots from a classic 1950s Tupperware ad is that in the women in the whiskey ads have a huge bottle of JD to keep them company. While it’s nice to see a whiskey company create a marketing campaign that acknowledges that ladies like whiskey too, it’s unfortunate that Jack Daniels felt the need to resort to such tired stereotypes to do so. And honestly, whiskey cookies?

Silver screen beauty Natalie Portman made headlines yesterday with a double-whammy of an announcement: she’s engaged and pregnant. The 29-year-old actress announced she will marry dancer and choreographer Benjamin Millepied, whom she met on the set of her latest film, Black Swan. She also announced that she is pregnant with his child, but refrained from revealing either the due date or the wedding date.

Google senior executive Marissa Mayer is proud to be a computer geek, and she thinks more women should consider careers in the technology industry. In a recent interview with Newsweek, Mayer said the stigma that math and science are somehow unfeminine still prevails, and she’s working to put an end to the notion. Mayer explained that Google makes a concerted effort to hire women, but that the percentage of females in technical positions at the company is still only around 20 percent, evidence that the stigma she speaks of does indeed still exist.

As the excitement over the impending royal wedding grows, we can expect a steady torrent of Kate and William-related merchandise to flood the market. The latest item available is a Royal Engagement five-pound coin, emblazoned with the happy couple’s visages. There’s only one problem: the face next to William’s bears absolutely no resemblance to his darling fiancée. Whoever designed the coin must have caught poor Kate Middleton on a rather uncoinworthy day.