Is there a serious lack of 'real men' in Hollywood these days?

Is our idea of 'adult masculinity' that different than it was decades ago? A recent essay in Time calls out some of Hollywood's highest paid leading men. 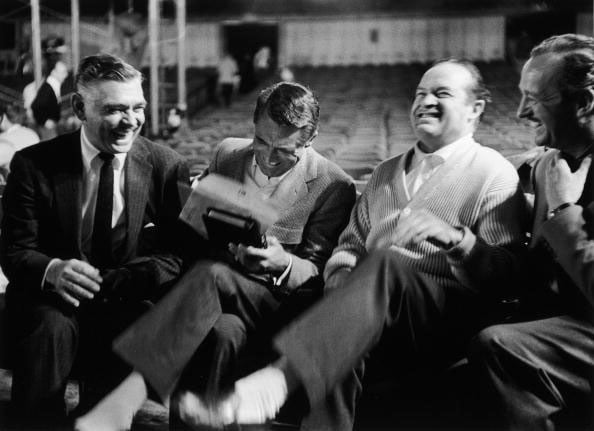 In the sad aftermath of James Gandolfini’s June passing, I was surprised to learn that he was only 36 when he first appeared in The Sopranos as the larger-than-life Tony Soprano.

Young though he was, Gandolfini was a commanding, darkly magisterial presence who exuded a powerful and masculine heftiness, both physical and psychological, on-screen and off.

Attractive, compelling and even slightly intimidating, he radiated confidence. A trait real or imagined, Gandolfini, in all of his flawed humanity, was never less than an adult — even his vulnerabilities seemed honed over a lifetime.

Leading men such as Gandolfini are in short supply — with his death they become practically an extinct species.

Time/Life recently published the wonderful photo of Cary Grant, Clark Gable, Bob Hope and David Niven (above) — the four, late, leading men sharing a big laugh at a rehearsal for The Academy Awards.

The black-and-white photo, a casual and careless Hollywood time capsule, is accompanied by a short essay lamenting the current crop of leading men, citing them for their callowness.

Tom Cruise, Brad Pitt, Robert Downey Jr., Leonardo DiCaprio, Tom Hanks and George Clooney are variously called out for being adolescent, sophomoric and laddish. “These guys are all at points in their careers when they can pick and choose their roles and command obscene sums of money for their work. But they all possess a kind of post-adolescent quality that, while marginally engaging, never quite feels fully adult,” the essay says.

Hard to argue the point — regardless of their appeal or talent, high school doesn’t seem like a distant memory for any of them.

The picture of Gable, Hope et al may benefit from nostalgia; still, it’s an image that percolates with grown-up sophistication and glamour, uncontrived, effortless, and mysterious — theirs is an exclusive club, with limited membership — an imagined specialness maybe, but that’s part of the fun.

They wear the mantle of adult masculinity easily.

The essay cites youth culture as being part of the problem besetting contemporary leading men but greater blame belongs to the cult of self-consciousness that has seeped into our everyday lives — there is something precious about all of us so why wouldn’t our movie idols look as if they’re always in costume?

Try to imagine David Niven on his wedding day getting matching blonde highlights with his bride as Brad Pitt reportedly did when he married Jennifer Aniston.

Tell us in the comment section below: Who do you think is the most masculine male actor?