What’s the point of a genderless baby?

A Toronto couple has announced that they’re raising their four-month-old in a unique manner: they’re keeping the baby’s sex a secret and raising him or her minus the (in)convenience of gender. 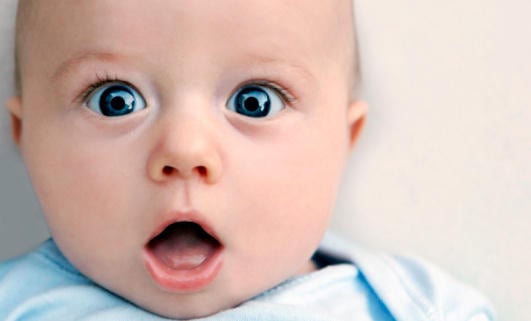 British poet Philip Larkin famously wrote that our parents “f—k” us up. Sadly, Larkin died in the early 80s, an era when parenting was still tethered to more commonplace disasters in judgment, and never got to see how steadily common sense would decline in the 21st century.

This story is for you, PL.

A Toronto couple has announced that they’re raising their four-month-old in a unique manner: they’re keeping the baby’s sex a secret and raising him or her minus the (in)convenience of gender.

The child, named Storm, has been living “genderless” since he or she was born. The only people who know what’s between Storm’s Huggies are Witterick, her husband and their two children, Jazz and Kio, who are both identified as boys. Even Storm’s grandparents are in the dark about whether or not they’ve got a grandson or a granddaughter bouncing on their lap.

Why are Storm’s parents so reluctant to clarify the baby’s sex? It’s a good question. Unfortunately, Kathy Witterick, the baby’s mother, doesn’t really come up with a very satisfying answer. In an interview with the Toronto Star’s parenting site, Witterick says via email, “in not telling the gender of my precious baby, I am saying to the world, ‘Please can you just let Storm discover for him/herself what s (he) wants to be!?”

The mother of three goes on to express her belief that in not sharing Storm’s sex with the world, she’s striking both a blow for freedom and against the limitations society imposes on children based on sex. More importantly, she’s empowering Storm by giving him or her the chance to decide, which would be fine if Storm were an adult and not a four-month-old baby who currently needs help sitting upright.

Here’s the problem with Witterick’s logic. By obscuring the baby’s sex she’s actually creating the problem of gender identity. She’s handing her baby a problem that doesn’t actually exist in the extreme way she’s presenting it, particularly now when most parents are highly attuned to a child’s need to express themselves. Also, I have to say Witterick’s idea seems like a really silly solution to the issue of sexual stereotyping.

The reality of life is that we don’t get to decide our sex when we’re born. We have to work with what we’re given and make hard choices that best suit our sense of self as we grow and develop. To pretend otherwise is a convenient illusion, kind of like the idea that all girls love tutus and every boy loves trucks.