Not since Monica Lewinsky, has an ordinary dress, worn by an ordinary girl, attracted so much attention. 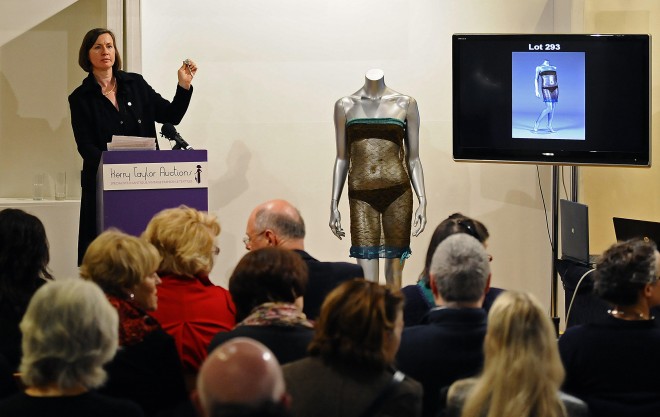 Not since Monica Lewinsky, has an ordinary dress, worn by an ordinary girl, attracted so much attention.

Thursday, at an auction held in central London, the increasingly famous “see through” dress Kate Middleton wore at a 2002 fashion show, while she was attending St. Andrew’s University, was sold for an eye-popping £78,000. It was at this charity fashion show, that Prince William reportedly first “noticed” Kate – wearing the black and turquoise, knitted lace dress – and the Royal romance was sparked.

After fierce bidding at Kerry Taylor Auctions the (apparently, unstained) dress went to a mystery man bidding on behalf of another mystery referred to only as “Nick” from Jersey – as, in the Channel Islands, not The Sopranos.

“I am delighted that the dress made a princely sum,” said auctioneer Kerry Taylor who added, they had expected the transparent frock to fetch between 8,000 and 10,000 pounds – not the £65,000 (plus a buyer’s premium) it went for.

The dress was intended to be worn as a skirt, but fashion forward Kate hiked that thing up and, with nothing but black lingerie underneath, went fishing for a prince.

The garment’s sale came as a surprise to most. Designer Charlotte Todd had, reportedly, once said she would hold onto the piece forever and, is said, to have turned down an offer of £1000 shortly after Kate and Wills became engaged.

It seems, however, Ms. Todd’s sentimental attachment to her most famous design was swayed by cold hard cash. “I am totally speechless, and feel very emotional,” said Ms. Todd, who has left the fashion business and is, now, working at an aquarium.

The auction included other royal dresses, including one worn by William’s mother, Diana, which sold for a mere £36,000 pounds. Clearly there’s a new princess in town.