What's a healthy argument between parent and child?

Mothers weary of nightly dinner table dustups with stubborn offspring may want to read this recent study (via Time.com)—if only for the brief ray of hope it bestows for future harmony. 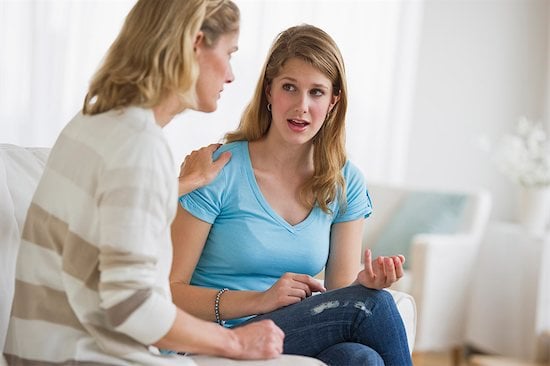 Mothers weary of nightly dinner table dustups with stubborn offspring may want to read this recent study (via Time.com)—if only for the brief ray of hope it bestows for future harmony.

Clinical psychologists at the University of Virginia found that teens that stood their ground in an argument with their mothers—lucky dads were left out of the experiment—were more likely to resist pressure from their peers to use alcohol and drugs than teens that gave up too easily in conflicts with mom.

Arguing, it seems, is a positive life skill for kids to learn early. And there’s no one better for kids to polish their debating skills with than poor old mom.

For the study, which was recently published in the Journal of Child Development, the researchers observed both conversations and disputes between 175 teens and their mothers. The study began when the kids were 13 and followed up later when they were between 15 and 16. Ultimately, the study revealed that those teens that held their ground in a dispute with their mother at age 13 were later shown to be less susceptible to peer pressure at 15 and 16.

Teens take note: the most successful of the teen debaters argued their points calmly and without losing their cool. They didn’t resort to whining, yelling, crying or other forms of brat-like behaviour.

But the researchers also discovered another critical component in encouraging the development of a teenager’s rational faculties—parental support when kids come for advice. Teens whose mothers were supportive, positive and warm when asked for advice also showed decreased susceptibility to peer pressure.

Giving a teenager the right to argue their case doesn’t mean parents have to accept behaviour they disagree with, however. Rather it only underlines the value of finding a balance between parental guidance and parental control as kids mature.

“What you want is to shift the conversation away from control toward exploration about how they can become self-reliant human beings.”