Why do Maritime moms feel like they're doing a great job at parenting, while the rest of the country is less kid-confident? 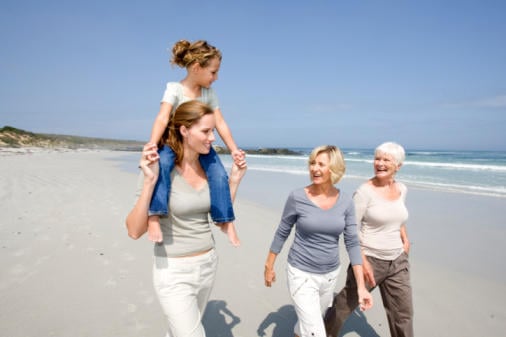 Last year, Chatelaine surveyed 1,000 women, ages 35 to 45, about pretty much everything — love, money, health, career, kids, sex — and found that results often varied drastically from province to province, leaving us with a lot of burning questions: Why do B.C. women report greater levels of happiness? Why do Quebeckers cook more often than everyone else? Why do Albertans have more sex?

To better understand our fellow Canadians — and steal their best practices — we asked experts to explain our differences in a series of posts. First, we discovered Alberta’s once-booming economy may have translated into booming sex lives. Next, we look at Atlantic Canada’s parenting prowess. Eighty percent of respondents across Prince Edward Island, New Brunswick, Nova Scotia, Newfoundland and Labrador have children (compared to an average of 73 percent across other provinces), and 40 percent of that bunch thought they were doing a very good job of raising them. That number may seem low, but consider that only 29 percent of moms elsewhere in Canada thought they were killing it. By comparison, the Atlantic provinces are positively chuffed. Here, five experts speculate why.

Related: The Canadian woman at 40(ish)

Michael Ungar, Canada Research Chair in Child, Family and Community Resilience and Professor of Social Work at Dalhousie University
“We judge ourselves in perspective to others, so if you ask someone how confident they are in their parenting, what you’re essentially saying: What is the community standard and how do you measure up? In Toronto, Ottawa or Vancouver, there’s a significant drive for overachievement in performance, whereas in the Maritimes, we tend to have a more proportional sense of success. There’s a culture here that says you don’t really celebrate the tall poppy in the field. There’s less differentiation in class as well, so you’re not getting people striving to put their children in the very best cello lessons or the most elite gymnastics classes. Our kids all go to the same daycares and almost all children go to public schools, so you don’t have the same pressures. There’s less obsessive worrying about the child every single minute, and less of a push to make the child the very best — as if that’s going to make them happier long-term.”

Heather Bartlett, the executive director of Daybreak Parent Child Centre in St. John’s, Newfoundland
“Smaller communities let moms to be more connected and, when moms have more social support, they feel greater self-confidence and that translates to parenting. Newfoundlanders are also known for having great senses of humour, and that’s a very important aspect of parenting — you have to allow yourself to sit back, enjoy and have a giggle.”

Related: What Canadian parents can learn from one Parisian Dad

Dr. Heather Morrison, physician, mother of four and Prince Edward Island’s Deputy Minister of Health
“Many parents in Atlantic Canada have inter-generational support from extended family, and that really does help create the sense you’re not taking care of you’re children alone. My mother lives down the street, and she helps look after our children. You also develop trust beyond family in these communities in P.E.I., which helps us feel like we’re able to communicate, share looking after all our kids and support each other in the good times and some of the frustrating times, too.”

Kate Inglis, children’s book author and mother of two living in Mahone Bay, Nova Scotia
“I don’t know that women in the Atlantic provinces are necessarily more confident, but maybe their context is a little bit more relaxed. If you live in a small village, like I do, your kids can walk or ride their bikes to school safely along the shore. You don’t have to deal with the subway or 16-lane highways on your commute, or childcare or housing that pretty much costs your salary. Those things, I think, are pressures that would certainly make me a heck of a lot more anxious about doing everything in the best possible way.”

Jennifer McGinn, owner of Lollipops and Gumdrops children’s store in Riverview, New Brunswick
“My son went to university in Toronto, and I went with him to look for an apartment. One of the land lords there told us she could tell we were from New Brunswick because we were so easy to talk to. People come into my store and start chatting about cloth diapers, and then they become friends. It makes you feel less anxious when you have that kind of community.”

More:
What the rest of Canada can learn about sex from Alberta
The pinking of pot: Canada’s weed revolution, for women by women
9 women share mortifying moments from the gynecologist’s office

FILED UNDER: Canada Day parenting This Is 40(ish)