Don’t worry so much about whether you're being witty or charming. And don’t sweat the fact that you’re not looking your best before you meet your boyfriend’s grandmother or your sister’s boss for the first time. 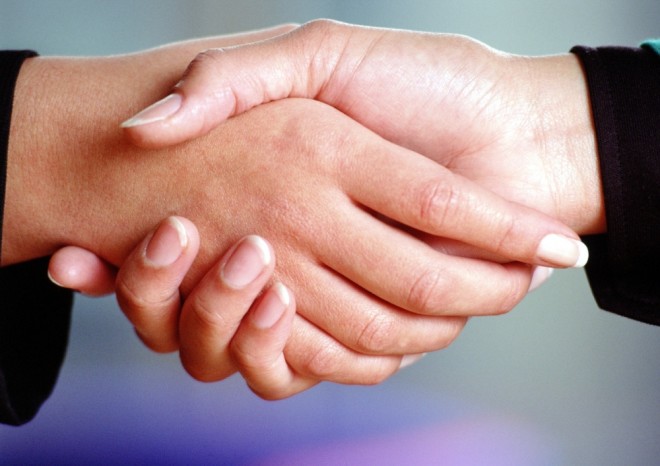 Don’t worry so much about whether you’re being witty or charming. And don’t sweat the fact that you’re not looking your best before you meet your boyfriend’s grandmother or your sister’s boss for the first time.

If your goal is to make a good first impression just be polite and extend your hand in greeting. A study discussed on Science Daily suggests the simple, old-fashioned handshake is the foolproof technique for winning you positive points with a stranger.

As the article points out, the handshake has long been considered the cornerstone of good business etiquette. And it’s not just a tool of salesmen and bank managers. Parents, too, have traditionally schooled their offspring on how, and when, to perform the social greeting as part of general etiquette training. Neurologists at the Beckman Institute, however, wanted to see if the greeting triggered any kind of brain response that might support all of the anecdotal evidence surrounding the power of the handshake.

For the study, researchers used functional magnetic resonance imaging (fMRI) technology to observe the brain activity of a small group. Then they had them observe animated images of social interactions. The results indicated that a handshake triggered regions of the brain that fall under the umbrella of the ‘social cognition network.’ Moreover, areas of this region that are linked to reward lit up, indicating that handshakes are experienced positively by the recipient, an experience that can only serve their interpretation of the stranger.

Based on the findings, lead researcher Florin Dolcos offered advice to those who are interested in how to make a favourable first impression. “I would tell them to be aware of the power of a handshake. We found that it not only increases the positive effect toward a favorable interaction, but it also diminishes the impact of a negative impression. Many of our social interactions may go wrong for a reason or another, and a simple handshake preceding them can give us a boost and attenuate the negative impact of possible misunderstandings.”

What makes a great first impression with you?