What Is Toxic Positivity? How Avoiding Negative Emotions Can Make Things Worse

Looking on the bright side is an understandable way to cope with difficult situations. But unrealistic optimism can actually make you unhappy, unhealthy, or just kind of a jerk. 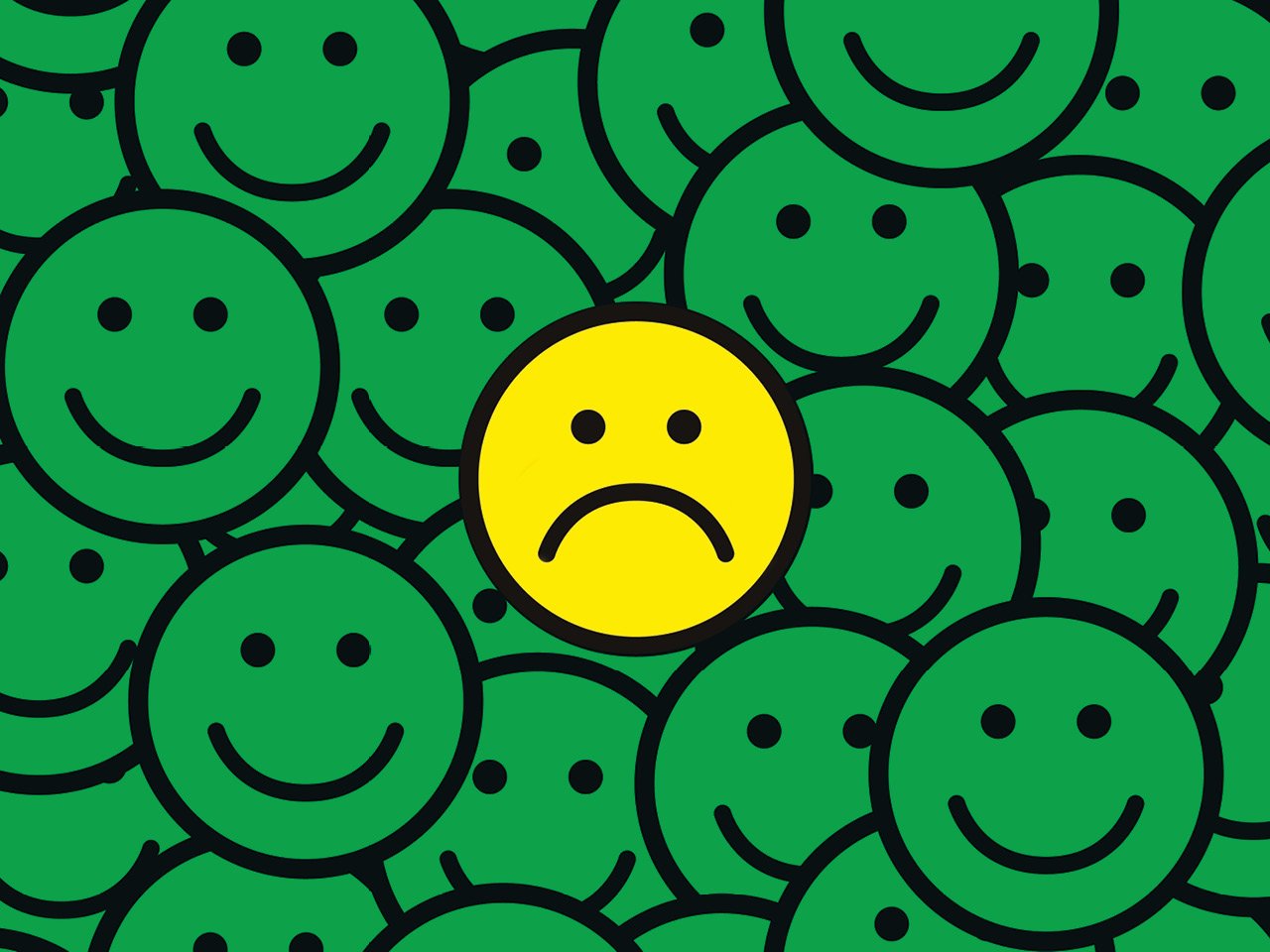 “You look just like normal!” someone said to me the other day. “You must be so happy that the worst is over.” The answer is yes . . . and no. I had breast cancer surgery a few months ago, and I am incredibly relieved to be recovering fairly well. But I still avert my eyes when I pass by the bathroom mirror en route to the shower, not wanting to see a patchy, pieced-together Bride of Frankenstein. I am sad. I am sore. I am worried the cancer will come back. Above all, I am tired.

There are days when it feels like The Lego Movie theme “Everything Is Awesome!!!” is jingling merrily away on repeat in my head. Except everything isn’t awesome. Not for me. Not for many people in our current, undeniably dark global reality. And not even for the songwriter, who came up with it during a horrible divorce. So why is there so much pressure to pretend otherwise?

Toxic positivity is a term bouncing around the internet lately, and it’s one that resonated when I first encountered it. Loosely defined, it’s a forced optimism, an intrinsic desire—nay, need—to shut down negative emotions as soon as they show up.

It feels counterintuitive at first: How can all of these good vibes be bad? I asked Brett Ford, an assistant professor of psychology at the University of Toronto, who devotes much of her research to weighing the costs and benefits of striving to feel good. “It’s usually not the positivity itself that’s toxic,” she says. “It’s the incessant need to feel happiness, or to appear happy, that can be counterproductive.”

It’s understandable to look for a silver lining, but, as a coping strategy, it can backfire. “The feeling that ‘if I’m not happy, something’s wrong with me’ is associated with decreased well-being and an increase in symptoms of depression,” says Ford. “People who judge their emotions as being somehow bad and strive to avoid them just end up experiencing more of them.”

Last fall, Ford released early research on how people have been managing emotions during the pandemic. She discovered that many of us are using a cognitive strategy called “reappraisal,” which involves re-thinking or reframing a situation to help change your emotional reaction.

In the face of COVID-19, “saying it will ‘blow over’ or ‘it’s just a blip’ helps some people feel better,” says Ford. “But when people use reappraisal to reduce fear, they’re less likely to engage in recommended healthy behaviours, like mask wearing and social distancing.”

Social media is full of people documenting attempts to put a positive spin on the pandemic, celebrating that they’ve had time to learn a new language, take up string art or perfect a sourdough starter. (I personally have spent hours making my Instagram grid appear lighter, brighter, happier.) Unfortunately, if you’re not into string art, imposing an unrealistically positive spin on a difficult experience can result in cop-ing with excess carbs, cannabis or alcohol—the Canadian Centre on Substance Use and Addiction noted increased alcohol consumption since the pandemic began. 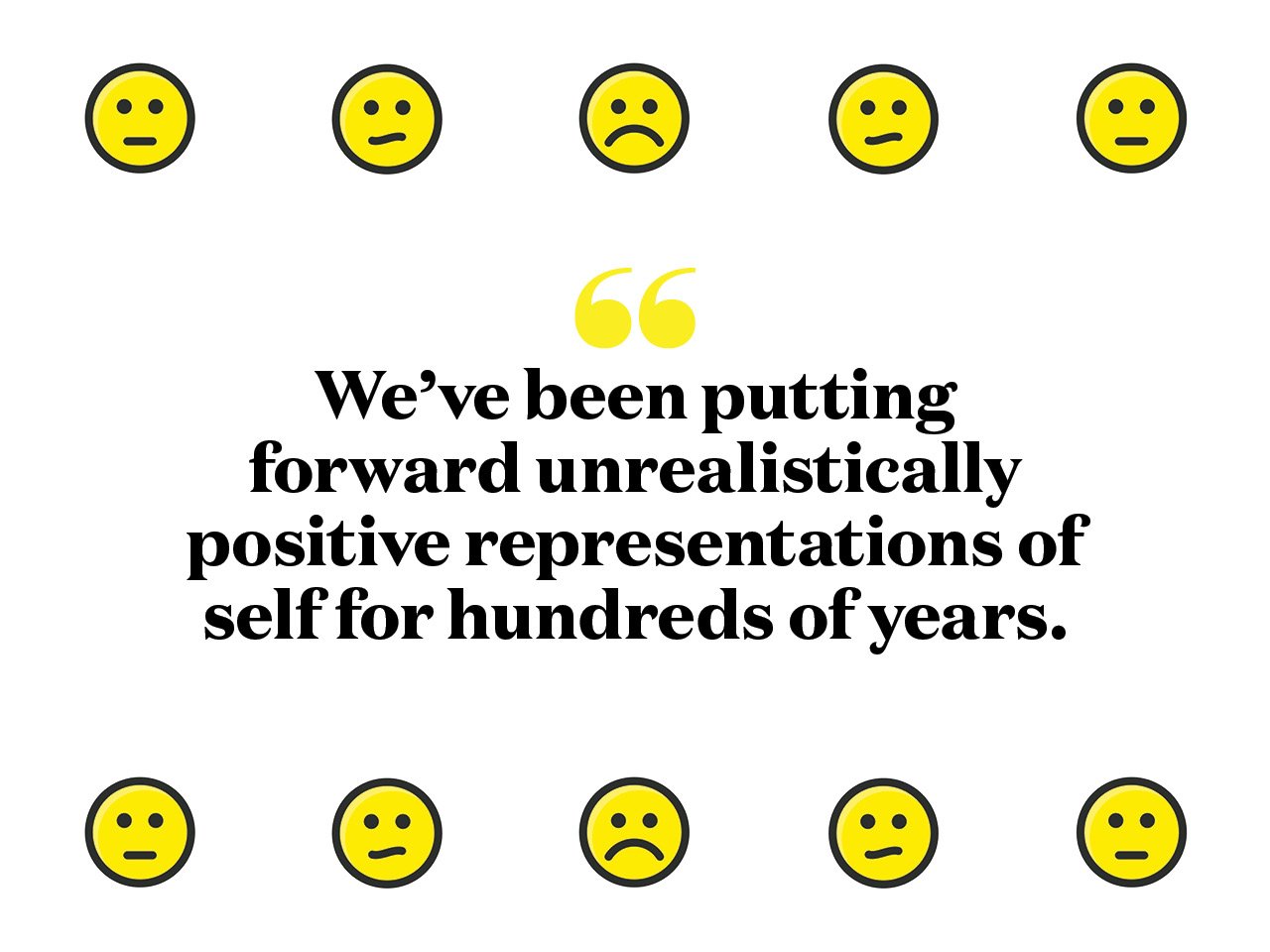 “If you’re insistent on only feeling happy or positive, you’re going to do what you need to do to escape negative feelings,” says Simon Sherry, a professor in the department of psychology and neuroscience at Dalhousie University in Halifax. He says that our compulsion to create a positive public image can be traced back to 18th-century portraits, where you might see a wealthy man depicted in his fine clothes with his pheasants, his dog, his wife and his children. (Not pictured: smallpox scars and outdoor plumbing.)

“We’ve been putting forward unrealistically positive representations of self for hundreds of years,” he says. And maintaining an elaborately constructed perfect self inevitably causes anxiety about concealing the gap between facade and reality.

The term toxic positivity isn’t bandied about much in academic circles, but there are other names for it, like unrealistic optimism. While a positive mindset can be a helpful way of coping in some cases, Sherry says, “excessive positivity or optimism or even happiness has a definite dark side.”

Unrealistic optimism isn’t just an individual problem—as a society, we collectively like to pretend things are fine, which can invalidate the severity and complexity of serious situations. It’s like celebrating a cold snap to pretend that global warming isn’t so bad.

If you’re suffering from mental illness, dealing with poverty or struggling under the weight of racism—these are not blessings in disguise,” says Sherry. “When we insist on telling [people] to look on the bright side . . . all we’re doing is invalidating their experiences.”

There’s plenty of invalidating going on amid the pandemic. The “we’re all in this together” mantra that surfaced early on during the global crisis is both misleading and harmful. Existing inequalities have only become more obvious, and hundreds of thousands of unemployed Canadians aren’t celebrating their extra leisure time.

“It’s difficult to reframe a pandemic as a wonderful experience,” says Sherry. “There’s a lot wrong with this world that we should be upset about and fight to transform, but if everything is great all the time, why would you want to change it?”

Kendahl Servino, a medical student at the University of Nevada, never really thought about the nuances of positivity—or that it could be negative—until she was diagnosed with breast cancer in late 2019. Then, she says, she overdosed on it.

“Sometimes, positive thoughts and words of encouragement are not what’s needed at the moment,” she wrote last June on her blog, Bits and Pieces. “In fact, sometimes positivity may be the last thing a cancer patient needs.”

In her post, Servino wrote that many of the comments she received from well-wishers didn’t make her feel better, especially the ones that brushed away the negative. There were a lot of “I’m sorry that this happened, but . . . ” statements—for example, “ but at least you’re feeling a lot better today!” or “but at least you caught it early.” Such comments made Servino feel like suppressing her true emotions, and as though people didn’t really want to hear about her struggles. The one that bothered her most was, “I’m sorry that this happened, but at least you’re done with everything now.”

“It implies that I can ‘move on’ from cancer, that things will return to normal,” she told me over email. “And I’m learning that there is no ‘normal’ to return to; when you’ve had a shattering experience like cancer, your life is changed indefinitely.” 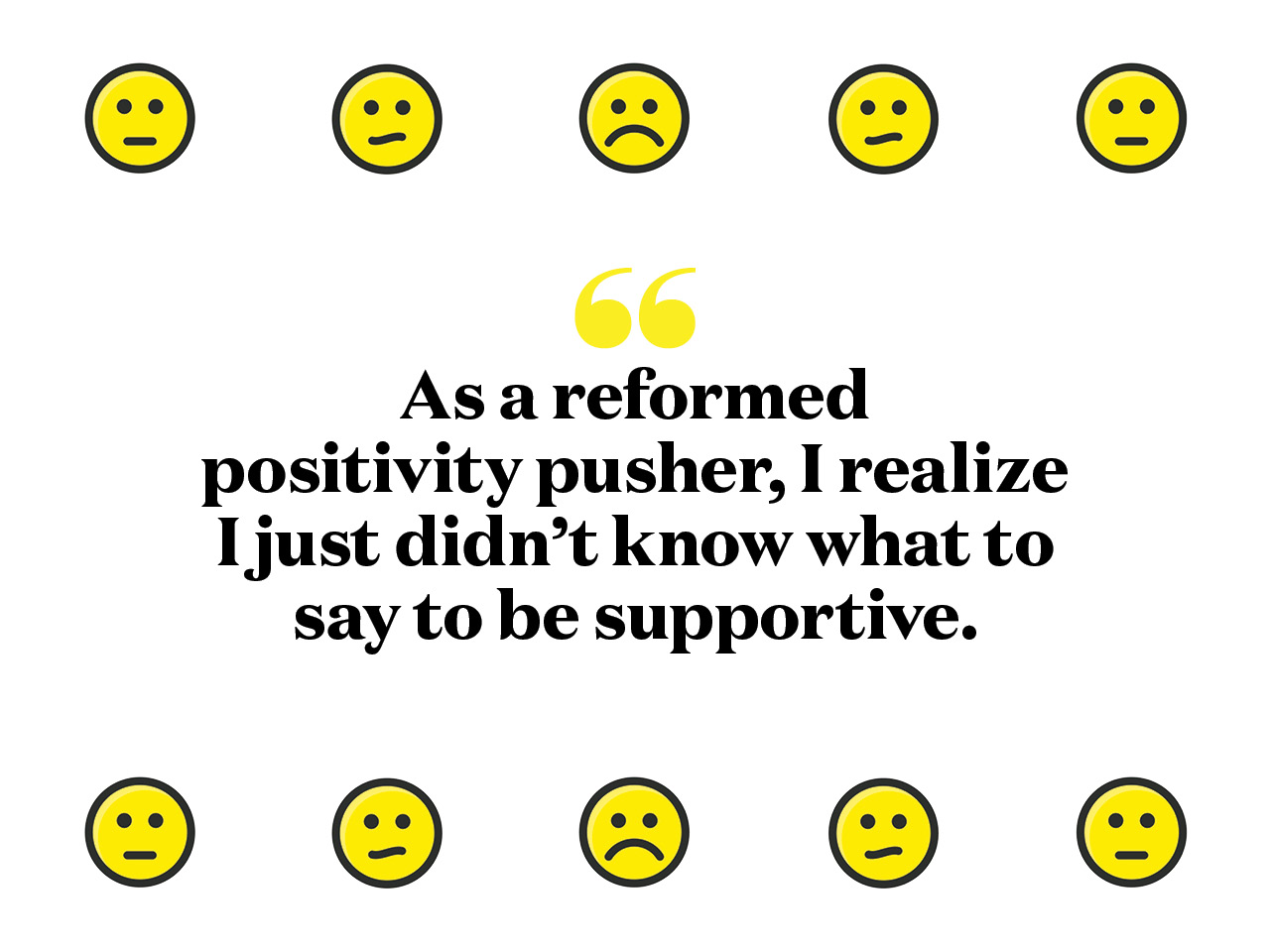 I can relate to everything Servino’s saying. Worse, I can recall saying very similar things to others before my own diagnosis. As a reformed positivity pusher, I realize now that my misguided attempts at being supportive arose from the fact that I simply didn’t know what to say to help.

Trying to make people feel better isn’t always the best approach, says Joti Samra, a clinical psychologist in Vancouver. “There’s a fine line between giving someone support to help them feel optimistic, and offering a level of positivity that is mismatched to the situation someone is in.” People dealing with something difficult don’t necessarily want to be told what to do. “What we want is for someone to be there, to listen to us and to not be afraid to hear some of our more intense emotions,” says Samra. “When you’re trying to support someone, the best thing is to tone down the advice-giving, the telling, the encouraging and the reassuring; step back and think about asking more questions, echoing what they’re saying and validating what they’re going through.”

Overcoming emotional avoidance goes both ways. When you’re the one having a tough time, it often makes sense to be neutral or upbeat when answering questions from someone who isn’t in your inner circle. But, Samra recommends doing an audit of the people you’re truly close to and determining whether you’re having honest conversations. “It’s a self-awareness moment: If you’re telling people things are fine and you feel like you’re wearing a mask, it’s a sign that you’re being overly positive, and inauthentic as a result.”

One way to tackle toxic positivity is to recognize the value of the full emotional spectrum. It’s hard to do, says Ford, “but when you can just notice your emotions and view them as normal responses instead of trying to do everything you can to avoid them, it can be very beneficial.”

She finds it interesting that not all cultures value positive emotions over negative ones. “There’s research looking at people from Japanese, Russian, Taiwanese and Chinese backgrounds that shows [they] don’t necessarily feel the need to get rid of their negative emotions or to increase their positive ones to the same degree that [people from] most Western countries do,” she says.

Sherry recommends first trying to see negative emotions as instructive experiences. He uses romantic breakups as an example: They can be enormously distressing, but there may be something that you did in that relationship that you don’t want to carry forward into the next one.

“It’s better to listen to your pain and to sit with it so you can learn from it,” he says. “We can’t expect our lives to be an endless stream of positivity—we need to learn how to accept our negative emotions.”

“Respect the negatives,” Servino wrote in her blog post, a phrase that really stuck with me. Accept that it really is okay not to be okay. Now, when faced with an “I’m sorry, but . . . ” Servino thanks the speaker for their well wishes but also tries to offer an honest perspective on how things are really going.

The question Servino appreciates most is simply, “How are you doing now?” The next time someone asks me, I am going to do my best to actually tell them.