What is a hangover exactly?

The holidays should come with a Ministry of Health warning. Not only do many of us eat too much, but we also ramp up our alcohol consumption. Unless you’re teetotal, there’s a chance you did or will continue to drink more than usual over the next few weeks. In fact, one U.S. researcher found a link between the holidays and an increase in alcohol consumption generally. 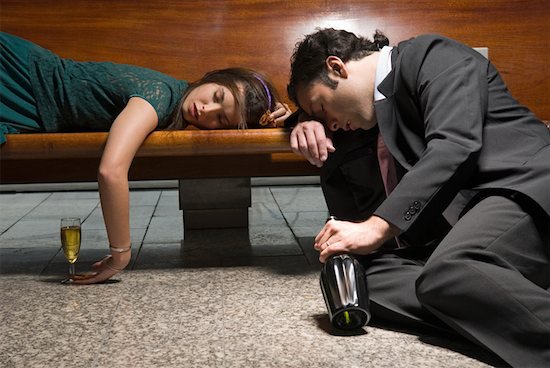 The holidays should come with a warning from the Ministry of Health. Not only do many of us eat too much, but we also ramp up our alcohol consumption at this time of year. And unless you’re teetotal, there’s a chance you did or will continue to drink more than usual over the next few weeks. In fact, one U.S. researcher found a link between the holidays and an increase in alcohol consumption generally.

And with more than usual amounts of alcohol comes a greater chance of experiencing the dreaded hangover.

A hangover is a catchall term that describes all of the side effects that result from drinking too much alcohol. Just how much is too much varies from person to person. As a guideline for “low-risk” imbibing, however, the Centre for Addiction and Mental Health (CAMH) advises women drink no more than two drinks daily and no more than 10 alcoholic beverages a week in total.

A hangover occurs as blood alcohol levels decrease. Symptoms include pounding headache, sensitivity to light and sound, feeling nauseated, dizziness, shakiness, irritability and overall fatigue. But while many of us get the gist, i.e. a hangover is 24 hours of horrible, we may not be aware of how alcohol affects the systems of the body, a chain of reactions that culminate in that spectrum of feel-bad symptoms hours later.

Here are some symptoms explained:

Fuzzy memory. Alcohol slows the brain’s communication system down hence the drowsy feeling that comes with being tipsy. This disruption in communication results in a whole host of effects, from an inability to move quickly and steadily to poor memory recall.

You feel sad. Alcohol lowers blood sugar, which may cause you to feel glum, anxious or emotional both before and after a big night. It may also account for your dizziness and shakiness.

Fatigue. Boozing may make you feel sleepy, but when you do finally turn in for the night it will rob you of the deep dreaming portion of rest known as REM sleep. It’s missing this aspect of slumber that can result in the sluggish, irritable feeling the morning after.

Nausea. Talking to Ralph on the big white phone? Well, tell him that drinking to excess increases the production of stomach acid and delays digestion, a combination that can result in—you got it—drunk dialing your old pal Ralph.

Unfortunately, there is no cure for a hangover. And while many swear by the old ‘drink water before bed’ advice, there’s no evidence to suggest it or any other herbal remedy has any merit. There is no proven method for preventing a hangover—nothing except sticking to a one-drink minimum or abstaining altogether.