What drove the Boston bombers to do what they did?

Flannery Dean reflects on the the tragedy in Boston and tries to make sense of the devastation caused by two young brothers. 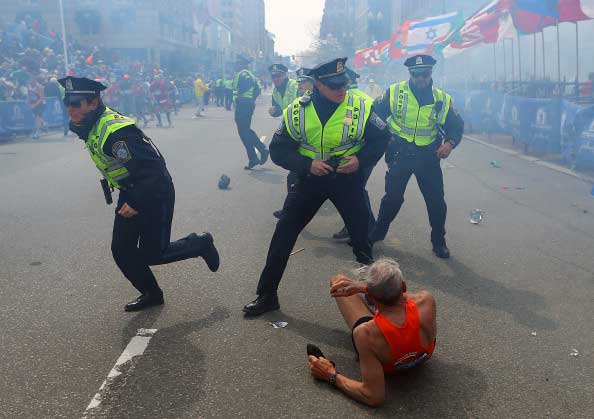 Police officers with their guns drawn hear the second explosion down the street. The first explosion knocked down 78-year-old US marathon runner Bill Iffrig at the finish line of the 117th Boston Marathon. (Photo by John Tlumacki/The Boston Globe via Getty Images)

What drove Tamerlan Tsarnaev, 26, and his younger brother Dzhokhar, 19, to do what they did during last week’s Boston Marathon?

Why would the young men leave two homemade bombs on the ground, in a sea of excited spectators that included children, bombs that were designed to spray bystanders with deadly, maiming shrapnel that included nails, ball bearings and metal?

Who are these men and why did they do what they did? Answering those questions has become the primary focus of investigators, police, and the public since the bombing took place last Monday.

Theories abound as to why the brothers, who are of Chechen heritage, would do something so horrible. And perhaps it’s a tribute to humanity’s eternal optimism that we think there is a way to explain, and therefore understand, the awful acts of bad people.

There are ties to radical Islam, it seems. In the months preceding the bombing, The New York Times reports that Tamerlan had indicated his admiration of jihadi videos on Youtube.

The Boston Globe reports that two years ago, the Russian government informed the FBI that Tamerlan should be considered a person of interest.

The FBI reportedly met with Tamerlan and various family members then but didn’t appear to be sufficiently concerned to pursue it further.

But now that four people are dead, including an eight-year-old boy who was waiting for his father to finish the race, and a 26-year-old police officer who was unfortunate enough to encounter the Tsarnaev brothers as they fled pursuit days after the attack, and now that countless people have been left maimed or injured, the FBI is definitely reconsidering their view of Tamerlan, now dead, and his little brother Dzhokhar, who is gravely injured and in hospital.

In the coming weeks and months, we’ll no doubt learn a lot more about the brothers and the thinking that motivated their actions. None of the information will ever render their behaviour comprehensible, however. Explanations will be plentiful, no doubt, and there will probably even be some who will be sympathetic to their cause. And yet, for all of the impending noise, the answers to the questions — who are the bombers and why did they do what they did — are already clear, blasted into the concrete on Boylston Street in downtown Boston.

The Tsarnaev’s are the kinds of people who believe that their anger is so meaningful — so infinitely worthy of attention — that it must find external expression. Selfishly they chose to make others feel the weight of their rage by inflicting pain and sorrow. That is who they are and that is why they did what they did. Call them terrorists, criminals, bad people, extremists, radicalized, or simply corrupt — it doesn’t really matter. Human beings prove themselves by their actions. The names we give them just help us to organize the excuses we come up with to try and understand them.