What did InStyle do to Tina Fey?

What did InStyle magazine do to Tina Fey? If you found yourself wondering just that while you were sailing through the grocery checkout line this weekend, you’re not alone. 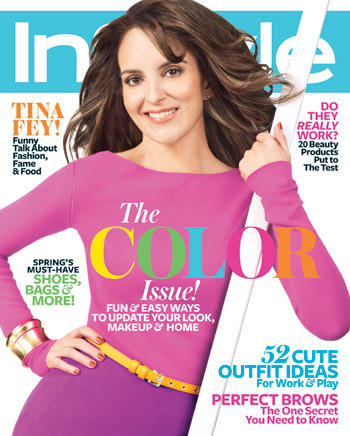 What did InStyle magazine do to Tina Fey? If you found yourself wondering just that while you were sailing through the grocery checkout line this weekend, you’re not alone. The New York Daily News calls the shot a “Photoshop disaster,” while others claim the magazine makes her look like a “stranger.”

While I can’t say Fey looks like a stranger on the cover—she’s recognizable, sort of — there’s obviously no denying that the magazine has made Fey’s familiar (and beloved) face look downright strange.

On the cover of the April issue, Fey is dressed in a bright pink sweater and skirt and leaning against a pole. But it’s not her colour choice that’s got people scratching their heads (though, to be petty, Fey doesn’t exactly seem like the pink type) it’s her teeny midsection and the creepy porcelain mask they’ve made of her face that baffles most people with even a passing familiarity of the 30 Rock creator and star.

While there’s no disputing that Fey is slim and attractive, at no point has she ever resembled the vacant, doll-like creature on the cover of the magazine. In fact, she’s made a career (and endless jokes) out of her flat-out rejection of anything smacking of phony glamour. Her 30 Rock character Liz Lemon wrinkles her nose at women who view life as a red carpet event. She wears jeans, cardigans and (gasp) dorky glasses to work every day. (Swap the jeans for Roots sweat pants and I’m dressing straight out of the Liz Lemon fashion handbook as I type this.)

Why would InStyle take Fey, an attractive woman with her own distinctive look, and transform her into some Botox-ed Real Housewife of New York-type? It makes about as much sense as Esquire putting Steve Martin in a tankini on its cover or asking Jerry Seinfeld to pose shirtless for GQ. It feels like an insult and reveals an utter lack of understanding about why people like and respect Fey in the first place.

The perils of Photoshopping are hardly a new topic for debate. Kate Winslet famously raised hell over her photo being absurdly altered in British GQ a few years ago. (Like Fey, Winslet has always eschewed magazine standards of “beauty”.) Perhaps that’s what is most annoying about InStyle’s cover—that it doesn’t just manipulate her image, it contradicts Fey’s cultural status. It’s Fey’s rejection of the myth of the flawless female that marks her as one of the most refreshing pop culture personalities around.

Can we get a little more Fey and a whole lot less Photoshop in 2011?