A simple invention to provide safe drinking water to millions

This sustainable giant basket may be the solution to preventing water-based illnesses in remote parts of the world. 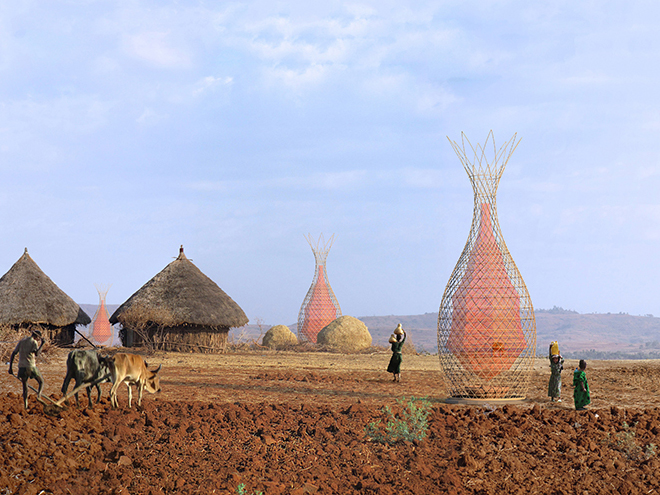 Solving the world’s water problems is a daunting, expensive task — or so we’ve imagined. But a simple invention has the potential to one day positively transform the lives of one billion people in Africa by offering them easy and inexpensive access to safe drinking water, reports an article on The Smithsonian website.

WarkaWater, the brainchild of Italian industrial designers Arturo Vittori and Andreas Vogler, is a straightforward structure (imagine a 30-foot-high vase) that pulls water from the air via a natural process. The water tower is handmade and comprised of natural materials. More importantly, it is easily assembled and inexpensive, coming in at around $500, according to the article.

The invention is most notable for its low-tech solution to the problem of providing people in remote areas with fresh, safe drinking water.

Here’s how it works: In the centre of the structure, which is protected from the wind by a latticework of stalks, hangs a mesh net. That net collects dew, which eventually turns into droplets that slide down the net and get collected in a container for use.

According to Vittori one tower can provide up to 25 gallons of safe drinking water. He and his partners have already placed WarkaWater Towers in Ethiopia and parts of Africa, where there’s some of the worst quality drinking water in the world, and in some areas, women and children must walk up to six hours in search of potable water.

“It’s not just illnesses that we’re trying to address. Many Ethiopian children from rural villages spend several hours every day to fetch water, time they could invest for more productive activities and education,” Vittori told the magazine.

See how the invention works: