Want to stoke his fire, do this—a lot 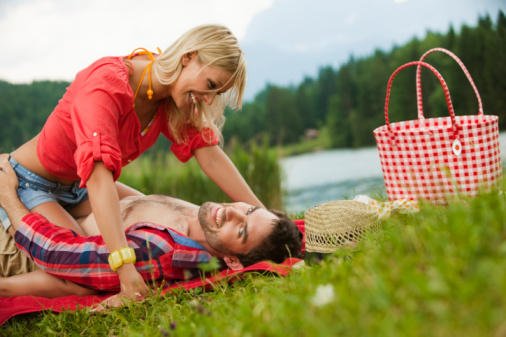 Sometimes I think the laws of attraction were written by the founding members of Monty Python during a wild weekend at the Playboy Mansion because if this new study (via National Post) says anything about the way human beings pair up, clearly somebody is having a laugh at our expense.

Basically, the study found what floats a woman’s boat sinks a man’s battleship.

For the study more than 1,000 participants were shown a selection of photographs of men and women displaying various emotional expressions. The participants were asked to provide their immediate reaction to each photograph. Women revealed a distinct preference for pictures of moody, non-smiling, proud men over those of smiling happy men.

Lead researcher Jessica Tracy told the National Post that this finding, which was duplicated three more times in separate trials, seems to confirm the enduring appeal of the non-committal “bad boy” for women. Smiling men may seem just too available, she added.

In contrast, men revealed greatest attraction to photos of happy smiling women and were least attracted to women who displayed a proud or confident expression. Smiling is a sign of one’s receptiveness and availability, said Tracy, which is apparently something men respond well to (proud ladies, join me in a collective groan, won’t you?).

Based on the study’s findings, smiling men and confident women the world over may want to rethink their facial expressions if they want to pique the interest of the opposite sex, especially next time someone takes their picture.

Ladies may want to take their cues from Julia Roberts and perfect the smiling beauty or certified lunatic look, while men may want to study the constipated glare of Twilight vampire Edward Cullen. Keep in mind, however, that’s just a technique for attracting a mate. A real-life relationship may require mastery of one or two more facial expressions if it’s going to survive.