Geena Davis on the visibility of women in leadership positions

Geena Davis is leading the charge to give women their due. 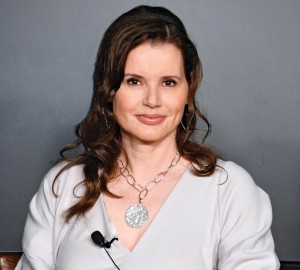 “We need to add in more girls, everywhere,” says Geena Davis, whose words earned her a standing ovation in Toronto in October. It was when her daughter was watching cartoons that Geena noticed how grossly misrepresented female characters are for kids. “The more TV girls watch, the fewer options they think they have in life.” To change that she set up the Geena Davis Institute on Gender in Media. “The percentage of women in crowd scenes in films is 17,” she says. “This same percentage is reflected in boards of companies and women in leadership positions. We need to change the way we are represented.” When women are not visible, girls feel a lack of importance and opportunity, adds Geena. (We dread to think what that means for women in Saudi Arabia, where they were recently airbrushed out of the Ikea catalogue!)

Last fall, the Royal Society, a scientific association in the U.K., concerned with the visibility of women in science, held a Wikipedia edit-a-thon. The idea was born when Uta Frith, a professor at University College London, learned that 87 percent of the site’s contributors are men and they’re doing a poor job of generating the profiles of some of the most inspiring women in science. Take the late Mary Buckland, for example, a British paleontologist and scientific illustrator who, until recently, was cited only as the wife of William Buckland (she now has her own page). Similarly, the profiles of Ada Lovelace, whose detailed notes inspired the computer, and Dame Kathleen Lonsdale, who discovered the structure of the oil component benzene, received makeovers.

To this end Wikimedia Foundation executive director Sue Gardner has set a goal to raise the share of female contributors to 25 percent by 2015. So get typing, ladies—we can literally rewrite history!