After months of speculation, conjecture, theorizing, and I dare say even a bit of cogitation, the truth about Kate Middleton’s wedding dress designer is finally out. The lucky designer is: Kate Middleton! 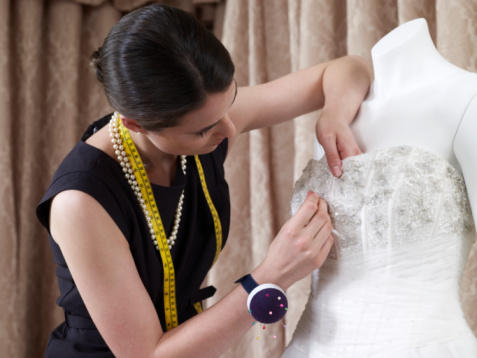 After months of speculation, conjecture, theorizing, and I dare say even a bit of cogitation, the truth about Kate Middleton’s wedding dress designer is finally out. The lucky designer is: Kate Middleton!

Putting to rest all the rumours about Alice Temperley, the Alexander McQueen label, and even Betsey Johnson, it was reported yesterday that Kate will be designing her own wedding frock – a thought that, if we’re totally honest, is really quite scary.

Yes, she’s the future queen of England but a few months working at the High Street chain Jigsaw and a “keen interest in fashion” doesn’t exactly a Valentino make. I mean, when was the last time you went to a wedding where the bride (who was not an actual fashion designer) created her own dress? Think of cousin Sophie (just to pick any extremely common English name) walking down the aisle in a champagne-coloured, sleeveless potato sack, inspired by her summer months working at The Gap.

Okay, so let’s take a breath and try to be positive.

Firstly, it’s Kate’s…um…arse on the line, so why shouldn’t she be the one who makes the thing? That’s pretty bold, actually.

Secondly, is Kate really designing the thing or is this from the Jessica Simpson school of fashion design (or the Avril Lavigne school of songwriting) where some one else with actual credentials does all the heavy lifting and, then, the celebrity “auteur” slaps their name on it in the last instant?

Enter Sophie Cranston. It’s being reported that the founder and designer of the label Libelula, is Kate’s dressmaker.

Ms. Cranston, 34, won the Designer of Year at London’s Graduate Fashion Week in 1999 and also worked for Alice Temperley and Alexander McQueen (hmm… this is sounding familiar), before starting her own label, which includes a bespoke bridal collection, in 2002.

Now, I wonder if the multi-talented Kate intends to come down the aisle to her own remix (as MC KM) to Avril’s Sk8er Boi?