Two is company. Twenty-two is a … wedding party?

The trend of bridesmaid inflation at modern-day wedding parties comes with a unique set of challenges. 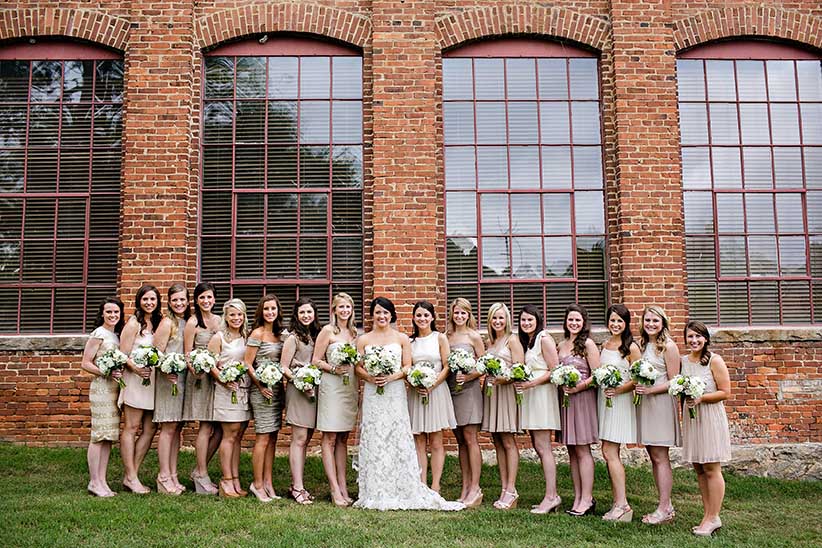 When Brodie Simpson and his now-wife, Jaclyn, started to discuss whom to include in their wedding party, they started small — just siblings. Some were married, so spouses were added. But Brodie also wanted to include his lifelong friends from Hamilton — all seven of them. Jaclyn, meanwhile, had friends in mind, too, not to mention cousins for whom she’d been a bridesmaid. “We just kept talking,” Brodie says. So, as Jaclyn walked down the aisle at St. Francis Xavier Church in Stoney Creek, Ont., in 2013, there were 11 groomsmen and nine bridesmaids. The big challenge came in finding a vehicle big enough to fit the entire party for the ride from church to reception venue. “We basically took a Greyhound limo,” he laughs.

How many attendants one has at the altar is a matter of tradition, according to TheKnot.com, with formal weddings of more than 200 guests having up to 12 attendants. “But traditions are meant to be broken!” the wedding website says. “These days, it’s acceptable to have as many attendants as you like.” Perhaps. A recent poll on Jezebel asked how many bridesmaids is too many; 44 per cent capped it at four, another 41 per cent at six.

They might have rolled their eyes at Katie Dalby’s wedding two years ago. A teacher at Boogie Shoes Dance Academy in Essex, England, Dalby had trouble picking which of her students to include as bridesmaids. “The only solution was to invite 74 of them,” she told the Daily Mail. So, along with her three sisters-in-law, a cousin, a niece and her best friend, she had 80 bridesmaids in total.

The uptick in attendants comes at a time when the average number of guests at a wedding fell from 153 in 2007 to 138 in 2013. “I just kept seeing my couples having these larger and larger wedding parties,” says Tracey Manailescu, co-founder of the Wedding Planners Institute of Canada. She says the trend is largely driven by Millennials, who tend to hang out in bigger groups. “It’s not just one best friend anymore,” she says. And there are fears that leaving someone out will cause a rift.

But a big wedding party can pose other problems. “Too many opinions,” ventures Manailescu. Photos can become a logistical nightmare. “It was a little frustrating for the photographer to keep us all together,” says Michael DiLoreto, one of the 11 groomsmen at the Simpson wedding. “It was like herding a bunch of cats.”

“You’re spending a lot of time posing people,” admits Edmonton-based photographer Carey Nash. With so much going on, “you almost need someone who’s not in the bridal party, who can gather people.”

That’s where Jen Glantz found a business opportunity. The 26-year-old, who was in four wedding parties in the first half of 2014 alone, figured she’d acquired enough know-how to do it professionally. As a bridesmaid for hire, she helps to organize events leading up to the wedding day, makes sure the other bridesmaids have their outfits tailored perfectly, and ensures speeches are on-point. And she attends the wedding in prescribed attire.

Her business has grown from a Craigslist posting to a full-on venture. Glantz says she’s been to more than 30 weddings. Some people hire her to avoid wedding-day bridesmaid drama. Other times, it’s for aesthetics. She says a common request is: “My fiancé has 10 groomsmen, and I only have nine bridesmaids—can you step in?”

Although her business is young, she says she’s noticed social pressure to have more attendants: “When you see people have these bridal parties with 10-plus people, you think that is the new standard.”

As parties get bigger, so do costs. A TD survey from April found that 40 per cent of Gen X and Gen Y Canadians who have been in a wedding party felt pressured to spend more than they could afford. A quarter spent, on average, more that $600 per wedding. “It’s not always a pleasure being asked,” Manailescu says. And saying no is hard, though it can be done.

As for the ones asking, “I always say, ‘Imagine yourself being stuck in an elevator,’ ” Glantz says. “Whom would you want to be around you for the next three hours? How many people would make you feel calm and stress-free? Those are the people you should have. If that’s two, great. If it’s 15, that’s fine.”

This story originally appeared in Maclean’s.