A cover girl that shatters stereotypes about female beauty

We're so inspired by athlete and author Turia Pitt who was featured as this month's cover girl in The Australian Women's Weekly. 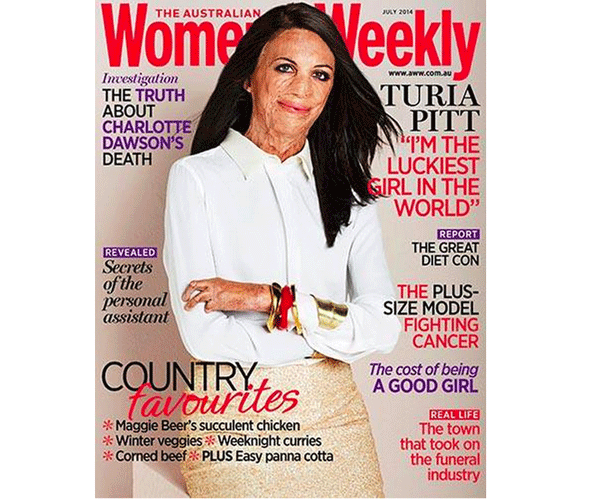 We’re all familiar with images of beautiful women on magazine covers. More often than not, they are celebrating life’s small victories like weight loss, celebrity, or box office success. We’re so used to the ‘body after baby’ cover image that we almost expect it to arrive six weeks after the last boldface celeb has given birth. Even more weird, we think that constitutes an achievement rather than an unfair pressure on women to put their figures above their personal wellbeing.

But an Australian Women’s Weekly cover (via Refinery29.com) is defying cultural convention and is choosing to celebrate grit, determination and the will to survive as truly unique and beautiful feminine characteristics rather than a perfect bikini body, or celebrity.

The cover, which has received international attention, features Turia Pitt, an engineer and author who survived a bushfire in which she sustained severe burns to more than 65 percent of her body back in 2011. Pitt, an avid athlete, was competing in a 100km ultramarathon at the time when she found herself trapped in the fire.

She wasn’t expected to survive the trauma, but has actively defied doctor’s expectations. Five years on, she’s a successful mining engineer and the author of a book, Everything to Live For: The Inspirational Story of Turia Pitt. On the cover of Australian Women’s Weekly she’s smiling broadly, clearly seeing her tale as one of triumph rather than victimhood.

Pitt, who appears on the cover not in distress but in celebration for all that’s she’s survived, hasn’t let her trauma affect her passion for athletic competition either. She continues to compete in tough fitness events. But this time she’s added a philanthropic bent to her endeavours, competing on behalf of Interplast, a non-profit that raises money to fund plastic surgery for people in need.

Here’s hoping her cover story marks a turning point for cultural ideas about what constitutes female beauty and strength.